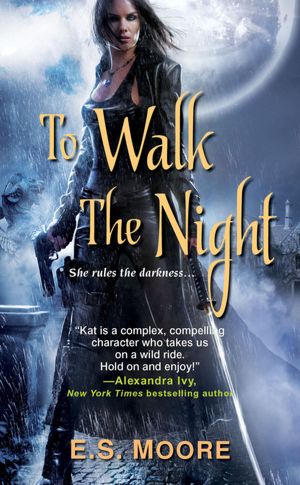 ORDER A COPY: To Walk the Night

Even a vampire has to face her inner demons…

Kat Redding is the very thing she hunts: a vampire, thirsting for blood, capable of killing any creature unlucky enough to get in her path. The difference is, Kat kills her own kind in order to protect human Purebloods. She’s good at what she does. Good enough to earn the nickname Lady Death—and the enmity of every bloodthirsty being around. But now a vampire Count is intent on merging his House with a werewolf cult to create a force of terrifying power.

Kat can’t allow that to happen. Even if it means taking on a den of weres and a vampire more ruthless than any she’s encountered before. She has the weapons, the skill, and a few allies. But that may not be enough to eliminate the Count before her own dark nature rises to the surface—and costs her whatever is left of her humanity…

Kat Redding is a vampire that hunts vampires.    This is the time after the Uprising, when vampires and werewolves made their presence known and declared themselves rulers of the night and the humans (Purebloods) began to hide in their homes after dark.  Kat has made it her mission to destroy the Vampire Houses who prey on those foolish or desperate enough to be out after dark.

Now the Luna Cult, worshipers of werewolves, want Kat’s help to destroy the power hungry House Tremaine and free their leader being held by the vampire House.   Although there is nothing Kat enjoys more than taking down the vampires, she is concerned if she can really trust a monster to guard her back.

In this new Urban Fantasy, E.S. Moore shows us a world where children aren’t the only ones who should be afraid of the dark.  Unlike many of the stories where supernaturals exist quietly protecting humans from other supernatural threats, in this world Vampire Houses dominate the night, using werewolves as their guard dogs, and any Purebloods (a/k/a humans) found wandering the night are fair game, kept as slaves and used for blood and sex.

Like most first books in a series, it was a little slowing going in the beginning as we set up the background of our heroine and the city around her, but once we got into the story it really picked up.

There are more than enough dangling story lines to keep me interested in reading the next book which comes out in July 2012.

Jonathan stood and walked around his desk.  He stopped all of five feet away from me and I still couldn’t see his face.  “I should probably explain something to you first,”  he said.  “The more you know going in, the more likely you are to understand why I came to you. There are certain things you should know, things best shown to you rather than told.”

“Sounds like a plan,”  I said.  Something about Jonathan’s tone had me on edge, but I managed to keep my cool.  So far, aside from Pablo’s attitude and Nathan’s angry demeanor, no one had really shown me much in the way of hostility.

Jonathan glanced over to his two associates and nodded ever so slightly.  Both Nathan and Gregory sat down, though Nathan did so much slower, as if he wasn’t sure it was the right thing to do.  The tension level in the room rose tenfold, and I desperately wanted to know what was going on before I accidently shot someone.

“Would you care to take a seat?”  Jonathan asked, motioning toward one of the recliners.  It was black and leather and looked really comfortable.

Jonathan bowed his head in acquiescence before speaking.  “I though you might say that.  I take it some of the rumors about you are true.  It’s probably why I haven’t seen Joshua since he was sent to deliver my message.”  His tone hardened. “I assume he is dead.”

My hand slowly fell to my waist.  I didn’t draw, but I wanted to be ready.  I didn’t like where the conversation was heading.

Nathan started to rise, but Jonathan waved him back down.  The big man hesitated, his frown deepening, before settling back down on the couch.

Jonathan leaned back against his desk and sighed.  “I should have expected it, really.  Joshua is an impulsive man.  He was to deliver the note and leave before anyone knew he was there.  I should have realized he would want to see you himself.”

I glanced at Nathan before answering.  The big man was glowering, but he didn’t seem like he was getting ready to fight.  Yet.

“I didn’t want to do it,”  I said.   “But I don’t like people knowing where I live, which brings me back to my question.  How did you know where to find me?”

“It wasn’t easy, honestly.  Even though I knew who you were, you had moved to a new location before I could act on my knowledge.  It made tracking you down that much more difficult.”

I clenched my fist.  How long had this guy known about me?  “How?”  It was all I could think to say.

“You made a mistake,”  Jonathan said.  “It happened a long time ago, back before you were as well equipped as you are now  Back before you had made a name for yourself.”

I stared at him, unsure what to make of the statement.  What kind of mistake had I made, other than getting myself captured once?  I was always careful, even back when I was young and stupid.

Jonathan stood silent for a long moment before speaking again.  “I was your mistake,” he said.  His hands slowly rose to the hood concealing his face and slide it slowly back from his head.  There was a shimmer, as if the air around his head was disturbed by some unfelt wave of heat; then his features came into focus.

7 responses to “To Walk the Night by E.S. Moore”