1) Hugh Jackman would make a wonderful Ryker Jones from Deadly Silence. He’s intense, smart, dangerous, and sexy. Very, very, very, sexy. There’s a picture of him next to a motorcycle on Pinterest, and it’s perfect.

2) Jason Momoa is one of my favorite actors of all time. He’s sexy and smart…and he looks amazing without his shirt. He’s also tall, dark, and so intense. Great hero material here.

3) Emily Rose is the actress who played the lead on Haven. She’s smart and spunky, and I think she’d make a great heroine in any of the books.

4) Salli Richardson-Whitfield is beautiful, intelligent, and so graceful. She played Dr. Blake on the Eureka series, and I thought she was fantastic.

5) Chris Pratt makes for a great hero as well. It’s not only his looks (which are very nice), but his obvious sense of humor. It’d be a lot of fun to cast him. 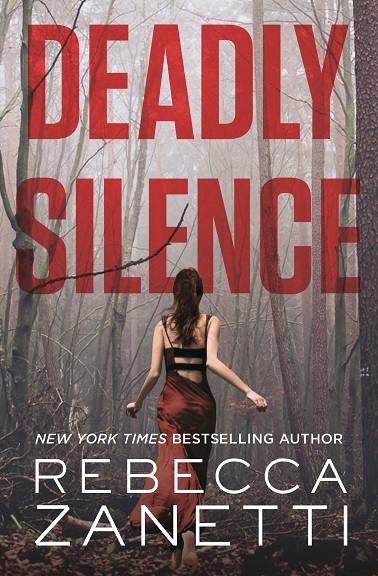 Under siege. That’s how Ryker Jones feels. The Lost Bastards Investigative Agency he opened up with his blood brothers has lost a client in a brutal way. The past he can’t outrun is resurfacing, threatening to drag him down in the undertow. And the beautiful woman he’s been trying to keep at arm’s length is in danger…and he’ll destroy anything and anyone to keep her safe.

Paralegal Zara Remington is in over her head. She’s making risky moves at work by day and indulging in an affair with a darkly dangerous PI by night. There’s a lot Ryker isn’t telling her and the more she uncovers, the less she wants to know. But when all hell breaks loose, Ryker may be the only one to save her. If his past doesn’t catch up to them first…

Heat from his body washed over her, but she lifted her head to meet his gaze. “We don’t have a relationship.”

He smiled then, and the curve of his lips held more determination than amusement. “I’m not letting you run, and I’m certainly not letting you hide, baby. Although neither of us has been in this for the long haul, I’m staying in Wyoming for the moment. The first thing that’s going to happen is I’m going to figure out who dared put a hand on you and make sure it doesn’t happen again.”

For the first time, she saw a side of him that gave her true pause. In the long haul, he’d be unbearably possessive. Why did that give her an intriguing sense of safety? “Knock it off,” she snapped in his face. “Get out of my business.”

That quickly, she found her back against the door and her front pinned by hard male. His hands planted on either side of her neck, his thumbs at her jaw, forcing her to look at him. “Something you need to understand and pretty damn quick is that your business is my business right now.” His thumb swept up and over the offensive bruise on her face.

“Step back.” Her voice trembled.

He ignored the very calm order. “No. You don’t want to tell me who did this? Fine. I’ll find out on my own, and I’ll have the name by the time I pick you up for supper. What you don’t want to do is deal with him or his case until I have that name. Kicking him in the balls might’ve just pissed him off more, and now you’ve let a bully stew on it for a while, which might be dangerous for you. Got it?”

“You have no right to interfere,” she whispered.

“Baby, I’ve been fuckin’ you for months. That gives me every right.” Anger glowed dark in his eyes.

His eyes softened. “You shouldn’t make statements you can’t back up.”

She shoved against his ripped abs.

He didn’t move a millimeter.

And then he did.

His head dipped, and his mouth found her neck and wandered up to her ear. His teeth scraped, and then his tongue licked the slight wound.

Of its own volition, her body did a full tremble.

His mouth slammed down on hers. She knew his kiss—often dreamed about it. Not soft and sweet . . . not even lustful. It was dangerous. From day one, she’d tasted danger on his tongue, and it burned her hotter than she’d ever been.

Never had she dated a bad boy, but after living her desired routine-driven life for years, she’d craved adventure, and he filled that need. He drew out a wildness she hadn’t realized she possessed.

He held her flush against the door, kissing her hard, sending a craving along her nerves that almost hurt. His tongue went to work, his left hand keeping her jaw open for him. His right hand found her hip and dragged her against the obvious bulge in his jeans. By the time he released her, she’d stopped thinking completely.

“What time are you finished today?” he asked, his breath heating her face.

He leaned back and gently put her to the side. “Stay in the office until I come for you at five, Zara.” He ran his thumb across her bottom lip. “Cross me on this, baby, and I ain’t gonna be gentle.” He had already shut the door behind himself before she could take a whole breath.

She blinked several times, her fingers going to her still-tingling mouth. What had just happened? 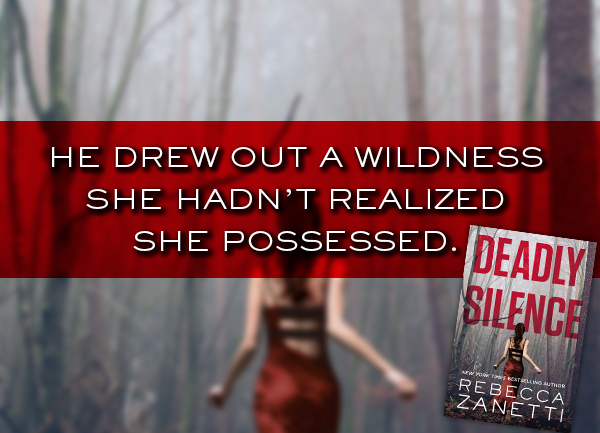 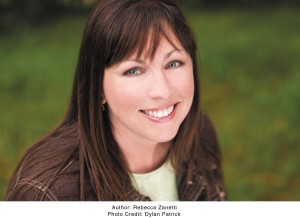 Rebecca Zanetti is the author of over twenty-five romantic suspense, dark paranormal, and contemporary romances, and her books have appeared multiple times on the New York Times, USA Today, and Amazon bestseller lists. She has received a Publisher’s Weekly Starred Review for Wicked Edge, Romantic Times Reviewer Choice Nominations for Forgotten Sins and Sweet Revenge, and RT Top Picks for several of her novels.  She lives in the wilds of the Pacific Northwest with her own alpha hero, two kids, a couple of dogs, a crazy cat…and a huge extended family.  She believes strongly in luck, karma, and working her butt off…and she thinks one of the best things about being an author, unlike the lawyer she used to be, is that she can let the crazy out.