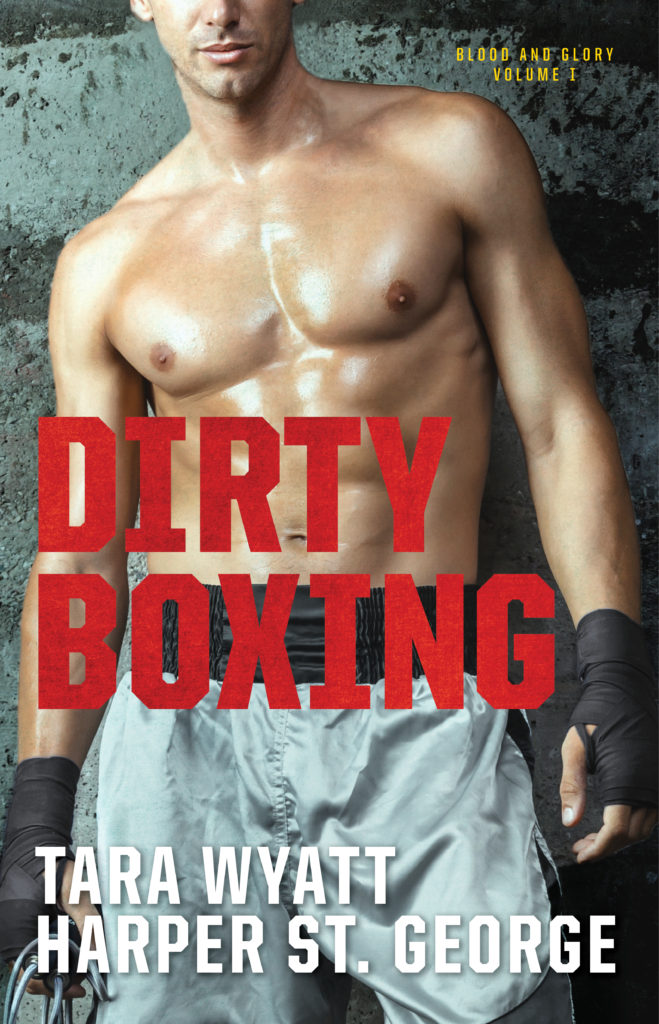 After an unstable childhood, Jules Darcy is very familiar with the risks of falling in love. And as an adult, she’s never let herself forget just how high those stakes can be. That’s why she ran away a year ago after her fling with MMA fighter Nick Giannakis quickly got serious. But when she jumps at the opportunity to reconnect with her dad by accepting a job with his growing fight league, she’s stunned to learn the abs, the chiseled arms, and the rock-solid punches she has to market belong to none other than her former fling. Unable to run away from the sexy middleweight this time, Jules vows to keep things strictly professional. But one look at Nick, and her resolve starts to crumble….

The last thing Nick expects when he signs with the prestigious World Fighting Championship is that he’ll have to work with the only woman who ever broke his heart. Desperate to hide the pain she caused him, Nick vows to keep his distance from his gorgeous ex. But when he realizes their intense chemistry hasn’t faded after a year apart, he wonders if they could have a future together, even if dating the boss’s daughter could complicate his bid for the championship belt.

Under the bright lights of Las Vegas, in the world of high-stakes prize fighting, they’ll have to take a risk and decide if their love is worth fighting for.

“St. George (A Marriage Deal with the Outlaw) and Wyatt (Necessary Work) have written a fast-paced romance filled with sizzling chemistry, which will have readers rooting for Jules and Nick to find their way back to each other. Verdict: This novel will have broad appeal for readers of sexy contemporary romance, not just those who have an interest in MMA.”

“A heartfelt story of second chances set in the high stakes world of MMA fighting…a satisfying blend of emotional drama and sizzling love scenes…Dirty Boxing embraces the swirl of confusing emotions that inundate its leads, using the turmoil to deepen their characters and complicate their relationship…Wyatt and St. George also devote considerable space to Nick’s close-knit family and Jules’ strained relationship with her father, ensuring that the leads’ families are complex figures with their own biases and flaws. The result is a romance with a happy ending that, in allowing for the work still to be done, feels all the more rewarding.”

Jules tugged Nick into a dark, semisecluded corner, as far away from Mia and Lana as possible. A large palm mostly sheltered them from view, but they were far from alone. “You’re already on thin ice here, Giannakis. My father has it out for you. He signed you because of your fan base and your marketability, but he doesn’t like you. You need to behave.” She leaned toward him, practically hissing out the last few words. Damn, that closeness felt good.

He crossed his arms, snorting out a chuckle. “You dragged me away from those women because you’re worried about what your father thinks?” Before she could respond, he backed her up against the wall, caging her body with his. “I think you didn’t like watching me flirt.”

Her jaw clenched and her eyes flashed—lust and anger and need all shining out at him. “I went over there to save you from yourself, but it’s clear you don’t want my help.”

“You’re right. Help isn’t even close to what I want from you.”

Her body flared—her eyes, her nostrils, her chest—and her lips parted. “I refuse to do this with you right now, Nick. I’m working.”

“That’s pretty goddamn ridiculous, seeing as you’re the one who hauled me into this corner because you couldn’t stand watching me have a good time with someone else.”

“You have an ego the size of Texas,” she ground out, and he inched closer.

His eyes closed for a second as he inhaled. Lavender. “But I’m right. Go ahead. Tell me I’m wrong.”

She planted her hands on his chest, and he could tell she’d meant to push him away, but at the contact she’d stilled, leaving her palms flat against his pecs. His skin warmed at her touch. “Move.”

He dipped his head and nipped at her earlobe. She let out a surprised gasp and shuddered. “And you’re the most frustrating, infuriating, gorgeously sexy woman I’ve ever laid eyes on.”

Someone stumbled into Nick as they passed, and he pressed into Jules, taking the impact and sheltering her, but erasing all distance between them. Their eyes locked, and he knew she could feel how hard he was, his cock straining against his zipper as it pressed against her hip.

He eased back just a little, and her brow furrowed, as though she didn’t want him to move away. Electricity charged through him, and before he could talk himself out of it, he covered her hand with his, slowly dragging it down his chest. Her breath caught, the black of her pupils almost completely eclipsing the blue of her eyes. His heart galloped in his chest as he waited for her to tug her hand away, but she didn’t. He slid her hand over his stomach, lower, lower, and stopped when it rested over the bulge in his pants.

“I may have been talking to other women, but none of them do this to me.” He moved her hand over him, a tiny stroke. “That’s all because of you.”

He braced his hands on the wall on either side of her, not to cage her in, but to keep himself upright. She didn’t take her hand away, and he smiled, a victorious thrill rushing through him. Dropping his head, he kissed her neck. For a year he’d thought he’d never feel her skin under his mouth again, and he closed his eyes against the sudden onslaught of emotion churning through him. She moved her hand over him in another little stroke, and he flexed his hips into her touch.

He managed to pull his head up, away from her. “Admit it, Jules. You want this.”

She rubbed her palm over him. “I think you’re the one who wants this.”

Their gazes locked again and the party swirled around them, music throbbing, voices shouting. Her fingers went to his zipper, and as she pulled it down with agonizing slowness, his balls tightened in anticipation.

Harper St. George was raised in rural Alabama and along the tranquil coast of northwest Florida. It was a setting filled with stories of the old days and it instilled in her a love of history, romance, and adventure. By high school, she had discovered the romance novel, which combined all of those elements into one perfect package. She has been hooked ever since. She currently lives on Florida’s Emerald Coast with her family and loves to connect with readers. She would love to hear from you. Please visit her website at HarperStGeorge.com or connect with her on Facebook at Facebook.com/HarperStGeorge.

Tara Wyatt is a contemporary romance and romantic suspense author who has won several awards, including the Unpublished Winter Rose, the Linda Howard Award of Excellence, and the Heart of the West. A librarian by day and romance writer by night, Tara lives in Hamilton, Ontario with the world’s cutest dog and a husband who makes all of her heroes look like chumps. Find her at Tara-Wyatt.com.

To celebrate the first in the Blood and Glory Series, we’re giving away one promo code for a download of DIRTY BOXING! Please check the following participating sites to enter to win, but keep in mind you can only win once!

Like this post? Share it with the rest of the world. --->
« Review: Blade of Darkness by Dianne Duvall
Spotlight/Giveaway: All I Want for Halloween by Marie Harte »