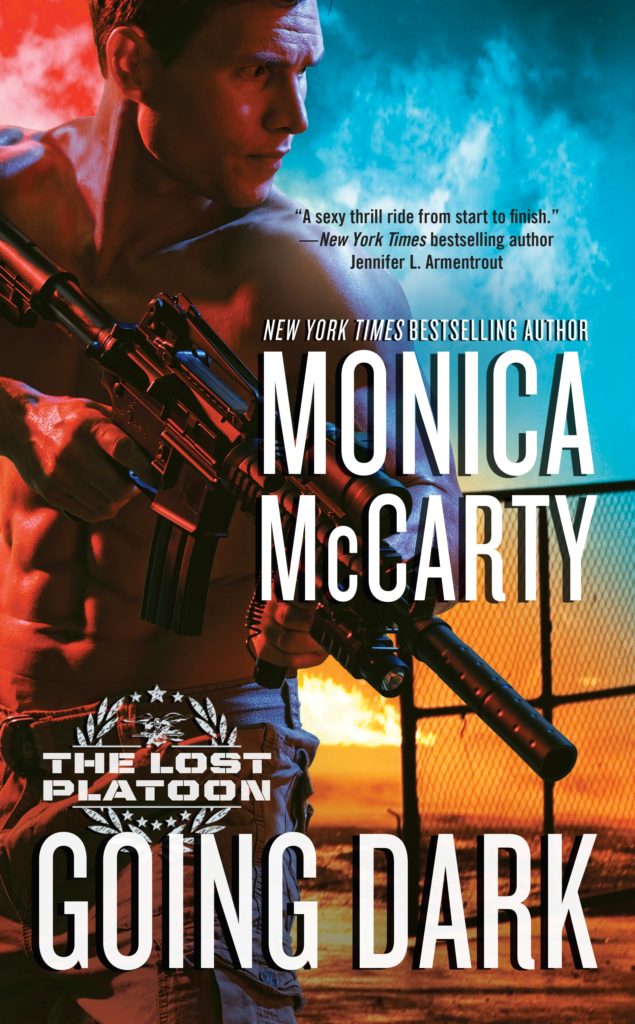 Like Rome’s Lost Legion, a SEAL platoon goes on a mission and vanishes without a trace.

After walking into a trap on a covert op in Russia, the men from top secret SEAL Team Nine are presumed dead. Not knowing whom they can trust, and with war hanging in the balance, the survivors must go dark and scatter around the globe.

Marine ecologist Annie Henderson joins her new boyfriend on a trip to the Western Isles of Scotland to protest a hazardous offshore drilling venture. When she realizes that she may be swept up in something far more dangerous than she’d intended, there is only one man she can turn to. . . .

She and the mysterious but sexy dive boat captain haven’t exactly gotten off to the best start, but something about his quiet confidence makes her think that he’s the kind of man she can depend on. Because he’s gruff and guarded, she can tell Dan Warren has secrets. But she could never imagine how high the stakes are for him to keep his cover, even as he risks everything to protect her.

Dean was about to turn up his street when a woman darted past him. She was so preoccupied with whatever was bothering her that she didn’t notice him.

But he noticed her. The sexy brunette had been the focus of too many of his sex-starved thoughts for him not to have recognized that shadowed figure right away.

His thoughts immediately turned to anger. What the hell was she doing out here alone at this time of night?

Granted Stornoway wasn’t exactly the mean streets of name-your-favorite American inner city, but it had its share of illegal activity—especially along the waterfront—and it wasn’t a place where a young woman should be walking alone in the middle of the night.

He went after her without thinking. Proving his point, she took way too long to realize he was behind her.

He could tell by the way she jumped when she turned around that he’d startled her.

But it didn’t last. As soon as she recognized him, her eyes narrowed angrily. “Why are you following me? You scared me!”

“Good. You shouldn’t be out here alone—” He stopped suddenly, seeing her expression. She looked about ready to burst into tears. “What’s wrong?”

Unconsciously he’d reached for her arm. Why the hell he’d done that he had no clue. He didn’t go around touching women without an invitation.

He released her before she could protest. But if she’d noticed the too-personal gesture, she didn’t let on.

“Nothing,” she replied, her expression too blank.

He held her gaze long enough for her to see that he knew she was lying. It must not be something she did often, because a guilty blush rose to her cheeks.

He took a step back.

Go dark. Don’t do anything to risk your cover.

He heard the warnings loud and clear. But he couldn’t very well let her walk around alone. What if something happened?

The tightening around her mouth before she responded gave a big hint of what might be bothering her. Trouble in paradise? Now, that was a cryin’ shame.

“He’s still at camp. He’s hanging around for the music. Julien plays guitar.”

Dean didn’t care if he was Jimmy Hendrix returning from the dead for one last show. “And he let you walk back alone?”

She immediately stiffened, giving him a scathing look. “He didn’t let me do anything. I make my own decisions.”

From the way she said it, it was clear she thought he was some kind of medieval misogynistic pig.

One of those, was she? He should have guessed. That kind of oversensitive feminist crap drove him crazy—not everything was a “microagression.” Being a strong woman didn’t mean you could be stupid about personal safety. And all he’d meant was that douche bag should have cared enough about her safety enough to insist on accompanying her.

Although admittedly Julien probably wasn’t much of a defense.

“Then your decision was a shitty one.”

She looked stunned. “You just say whatever you think, don’t you? I wasn’t asking for your opinion.”

“Well, you got it.” He gave her a long look, taking in the Tulane sweatshirt, tight jeans that left no room to hide anything, and flip-flops. “And unless you are a black belt jujitsu specialist or trained in self-defense and carrying some kind of weapon, I’m walking you to the guest house.”

She looked up at him half outraged and half bemused, as if she couldn’t quite believe someone like him actually existed. It was a look he’d been on the receiving end of more than once.

Eventually her mouth twisted with a smile. “How do you know I’m not?”

“Because if you had any secret ninja skills, from the way you were looking at me a few minutes ago, I’d be on my ass right now.”

Monica McCarty is the New York Times and USA Today bestselling author of twenty Scottish Historical romances and two Regency romances. Her books have won and been nominated for numerous awards, including the Romance Writers of America’s RITA & Golden Heart, RT Book Reviews Reviewers’ Choice, the Bookseller’s Best, and Amazon’s Best Books of the Year. Known for her “torrid chemistry” and “lush and steamy romance” as well as her “believable historical situations” (Publishers Weekly), her books have been translated and published throughout the world. Monica’s interest in the Scottish clan system began in the most unlikely of places: a comparative legal history course at Stanford Law School. After a short, but enjoyable, stint practicing law, she realized that mixing a legal career with her husband’s transitory career as a professional baseball player was not exactly a match made in heaven. So she “traded” in her legal briefs for Historical Romances with sexy alpha heroes. When not trekking across the moors and rocky seascapes of Scotland and England, Monica can be found in Northern California with her husband and two children.

Like this post? Share it with the rest of the world. --->
« Review: So I Married a Sorcerer by Kerrelyn Sparks
Review: Going Dark by Monica McCarty »