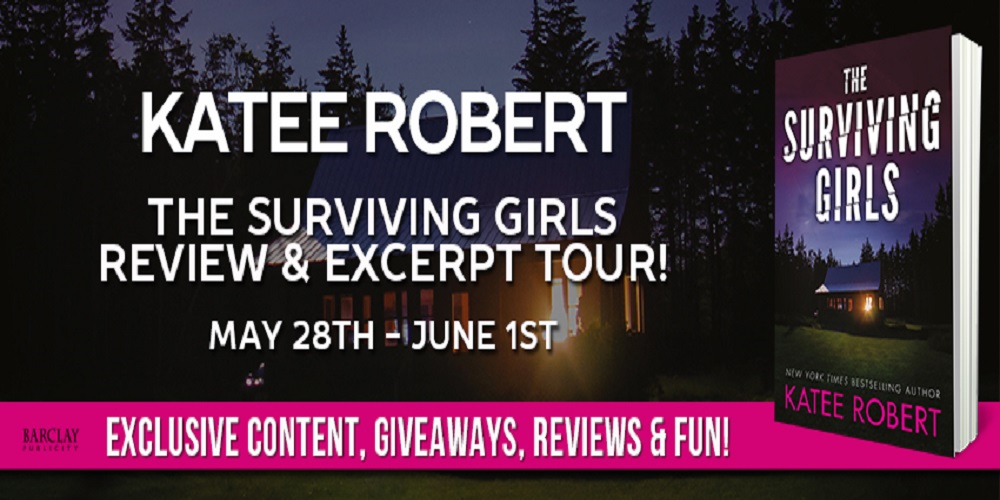 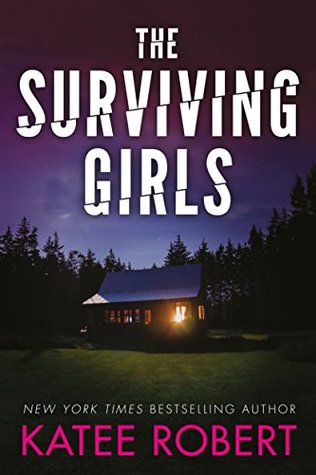 Twelve years ago, Lei Zhang and her friend Emma Nilsson miraculously lived through the notorious Sorority Row Murders that left twenty-one of their sisters dead. Still wrestling with the trauma but finally out of the limelight, Lei and Emma are now devoted to helping other victims find closure. But most disturbing for Lei—beyond the gut-wrenching survivor guilt—is that the killer was her boyfriend. He’s behind bars, but she’ll never lower her guard again.

When a copycat killer targets Lei and Emma, FBI Agent Dante Young is put in charge of anticipating the sociopath’s every move. But what he doesn’t expect is his immediate and overpowering attraction to Lei. The closer they get to each other, the more desperate and terrifying the questions become: Who wants to finish what the killer started—and why?

Now Agent Young vows to protect Lei at all costs. If they have any chance of a future together, first they have to stay alive… 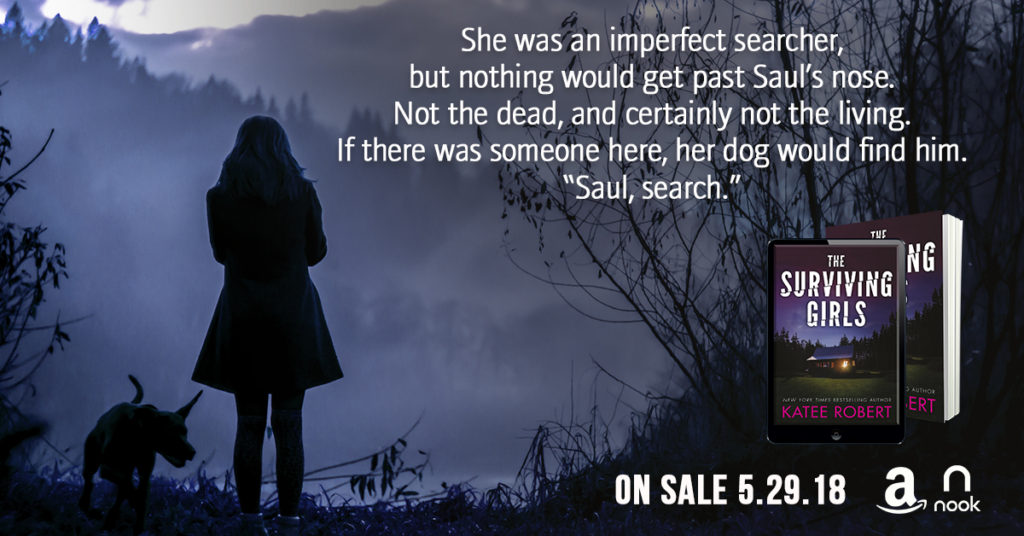 Lei couldn’t breathe. Her chest closed painfully as if she’d been knocked flat on her back, and her lungs burned with the need for oxygen. Somewhere in the tiny rational corner of her mind, she knew there was nothing really wrong with her, but rational thought had no place in the midst of her panic.

He’s back. Emma was right all along and he’s coming for us.

Travis Berkley is still in jail. This is a copycat, and no matter how bad a copycat is, he can’t be worse than Travis. You survived before. You will this time, too.

A whine cut through her thoughts, and then Saul was there, nudging her hand with his cool nose. She inhaled sharply, suddenly aware that everyone in the room was staring at her. The Feds had the blank-slate expression she’d come to associate with cops when they were in a difficult situation. Emma looked at her as if she was on the verge of her own panic attack.

Lei stroked her hand over Saul’s head, forming a wall of indisputable facts in her mind to keep the fear at bay. She wasn’t twenty-one anymore, only a couple of years out of the stifling family home she’d grown up on, still drunk on freedom and the realization that she could do anything she wanted to with her future.

She’d been an idiot. A child who was playing dress-up without realizing the pitfalls of adulthood.

Though most pitfalls don’t come attached to a knife.

Lei wasn’t that girl anymore. She’d seen the worst Travis Berkley could offer and had the scars to show for it. She could shoot. She could fight. She’d worked with enough cops over the course of her career as a trainer and search team that she had an inside view to how their minds worked.

She would not lose herself to terror.

Another stroke to Saul’s head and she was able to speak. “How close to the original murders are the details?”

Agent Young exchanged a glance with his partner and leaned forward, bracing his elbows on his knees. His big hands dangled between his legs, and she distantly noted that he had really firm thighs beneath the expensive slacks. He spoke slowly, as if gauging her response. “We haven’t had a chance to check the original case files, but the big details are almost identical. The murders were performed in the same way—girls kept in a main room and taken out individually. We think he snuck in through a window, because their condo was on the second floor and he used a knife from the kitchen.”

She could almost hear Travis’s voice in her head, even after all these years. Let me in, Lei-Lei. I have a surprise for you. Stupid. She’d been so incredibly stupid, swayed by a pretty face and a boy her parents would approve of who made her feel. Smart, athletic, the right dollar amount in his family’s bank account. Someone bright and colorful and checking all the right boxes.

Since she couldn’t bring herself to ask if one of the girls let him in, she focused on the rest. “If this is a fan, he must have been in contact with Travis at some point.” She put her hand on Emma’s leg when her friend flinched at his name. The Feds didn’t react, which made her sigh. “But you already knew that. You don’t need me telling you how to do your job. What is it you need?”

Another loaded look between them. They’d obviously been partners for a long time, because they managed to convey an entire conversation’s worth of talking in a single look.

Again, it was Agent Young who took the lead. “We can find the details of the case easily enough, along with your accounts, but what I’d like to know is your take on Travis.”

“Because I dated him.” She stated it baldly, as if the fact she’d slept with a murderer was something she’d dealt with and moved on from. As if the fact didn’t still keep her up at night, moving beneath her skin until she wanted to take a wire brush to her body. There weren’t enough hot showers and bleach baths in the world to change the fact she’d willingly been with him. She could never take that back.

“Because you—both of you—have known him longer than anyone.”

She stopped short. Dante. It fit him somehow—strong and a little bit intense. He masked it well, but there was fire lurking in the depths of his dark eyes, in the way he clenched his fists as they spoke about Travis. She shouldn’t be forming personal opinions about any man, let alone one connected with the case. Lei’s track record had more than proven that fact.

While she was still trying to process her strange and seriously inconvenient reaction to him, Emma had found her voice. She spoke softly, her southern accent giving her breathy tone a pretty lilt. She had a Dolly Parton thing going for her—at least before Dolly got a little crazy for plastic surgery—and Emma wasn’t above playing up the sweet-southern-belle thing when it suited her. “Travis Berkley is a sociopath with a healthy dose of narcissistic personality disorder—which you already know because you read the file. Everything is in the file. We have been doing our best to get past what he did to us—to our sisters—and that means forgetting as much as possible.”

Maybe for Emma. Lei couldn’t afford to forget. It had been her mistake that tipped the first domino that destroyed so many lives. While it was possible Travis could have gotten into the house on his own, she’d been the fool who let him in her window.

The knowledge made her hands shake. Emma might want to do everything to avoid that gory walk down memory lane, but Lei didn’t have that option. Guilt wrapped around her throat, tightening, ever tightening. “You have something specific you’re here for.”

Agent Rowan leaned forward, a clear indication that she’d take it from there. As much as Lei wanted the calming force Dante—Agent Young—seemed to emanate, she turned almost gratefully to the redhead. She eyed her as if Lei was a particularly interesting bug. “We’re theorizing this fucker—”

She didn’t look at him. “These women have seen enough, Dante. You know as well as I do that a few choice curse words aren’t going to have them scrambling for their sniffing salts.”

Lei understood now why Britton had paired these two together. Clarke was the blunt force designed to set a person back on their heels so they were too busy reacting to her foul mouth to stop and think that there might be a shrewd mind behind those deceptively big blue eyes. Dante on the other hand, was a cool summer mist, unruffling feathers and putting everyone in the room at ease with his calm presence. Both agents would be underestimated in different ways, which was only to their benefit.

She eyed the dogs on the floor. Neither of them seemed overly concerned with the Feds in the room. Good. Lei had more than proven she could be fooled, but Saul couldn’t. Every time he reacted poorly to a person, she paid attention—and most of the time something eventually came to light to prove her dog’s instincts correct.

Clarke followed her gaze and then refocused on Lei and then Emma. “A lot of sociopaths think they’re smarter than everyone else in the room—some of them are even right—and Travis sure as hell falls into the latter category. His IQ is 167, and from all accounts, prison hasn’t broken him. What we need to know is if he’d encourage a fan to take these steps.”

“Of course he would. He’s a fucking psycho,” Emma snarled.

“What do you think?” Clarke was looking at Lei.

Because why not? Even now, cops thought Lei had some kind of inside track to the way Travis’s mind worked. She’d dated him for months, had slept with him countless times, and so she must have some insider knowledge to explain how the golden boy went so very, very wrong.

She hadn’t been able to give them a satisfactory answer then. She didn’t have one now, either. But she could try.

Other Books in the Hidden Sin Series 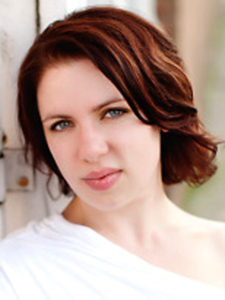 New York Times and USA TODAY bestselling author Katee Robert learned to tell her stories at her grandpa’s knee. Her 2015 title, The Marriage Contract, was a RITA finalist, and RT Book Reviews named it ‘a compulsively readable book with just the right amount of suspense and tension.”  When not writing sexy contemporary and romantic suspense, she spends her time playing imaginary games with her children, driving her husband batty with what-if questions, and planning for the inevitable zombie apocalypse.