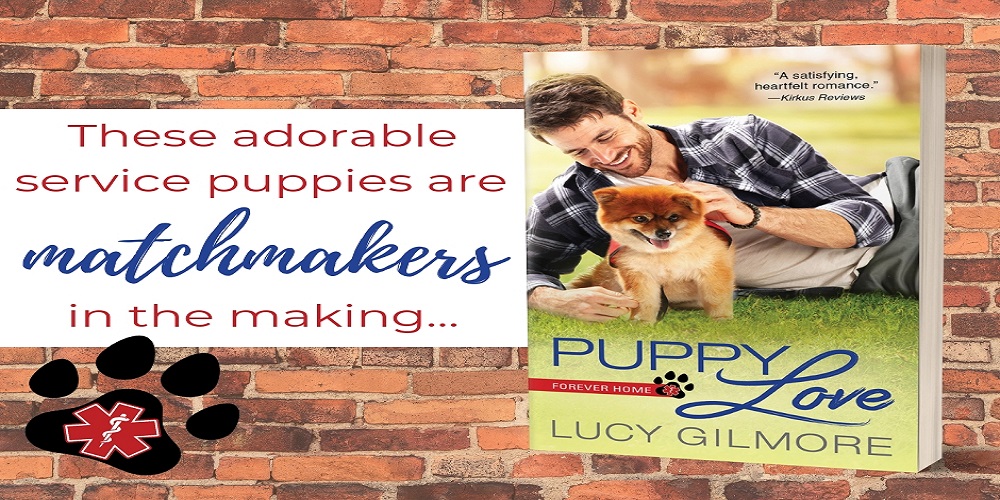 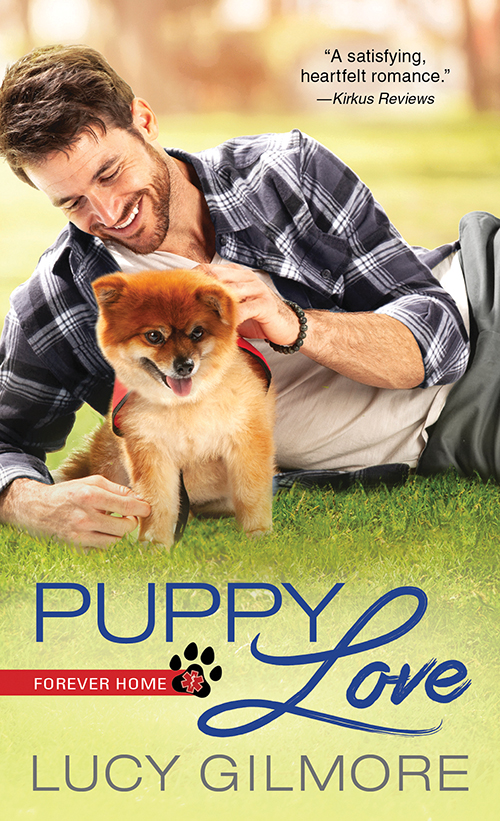 These service dogs in training will always fall in love at first bark.

When Sophie Vasquez and her sisters dreamed up Puppy Promise—their service puppy training school—it was supposed to be her chance to bring some good into the world. But how can she expect to do anything when no one will take her seriously?

Enter Harrison Parks: a rough, gruff, take-no-bull wildlife firefighter in need of a diabetic service dog. He couldn’t be a more unlikely fit for Sophie or Bubbles—the sweet Pomeranian she knows will be his perfect partner—but when Sophie insists he give them both a shot, something unexpected happens: he listens. Even better, he keeps on listening, even as Sophie and Bubbles turn his lonely, uber-masculine world upside-down.

As it turns out, they all have something to prove…and more than enough room in their hearts for a little puppy love.

“You know, now that I think about it, you’re a lot like Sleeping Beauty,” she said, the words popping out before she could stop them.

He blinked, the movement so careful and deliberate it was like watching a video in slow motion. “What did you just say?”

“You’re like Sleeping Beauty,” she repeated. “Gorgeous and grumpy, awakening after a long, deep sleep to find everything overtaken by thorns.”

Considering the decay of the barn behind them, it seemed an apt metaphor. The red paint had long since faded to a burnt pink, the roof sunken in several places. The scent of animals and hay had given way to a more general earthiness.

“That would make me the prince, you know,” she said. When he didn’t answer right away, only stared at her like she’d been taken over by body snatchers, she added, “Because I kissed you yesterday.”

That got him to snap to attention. “The devil you did. I was the one doing the kissing.”

She did her best to ignore the force of Harrison’s words—and how forcefully they set off a reaction in her body, setting her pulse thumping in ways that no amount of running could match—but it was no use. There was something so liberating about the way he handled her. Not carefully or delicately, or even like a thing to be cherished, but as a woman of courage.

As a woman of strength.

“They say the Sleeping Beauty story is a metaphor for sexual awakening,” she said, emboldened by this realization. “I wasn’t sure I bought into it at first, but it grew on me after a while. I mean, on top of that whole waking-up-from-a-kiss nonsense, she pricks her finger on a spindle. Have you ever seen a spindle? Like, a real one?”

“Where would I have seen a spindle?” he demanded. “Do you think my dad weaves textiles in his spare time?”

She giggled, unable to picture her second-favorite Parks man going anywhere near a textile. “Well, I’ll save you the trouble. It’s basically ye olde phallus.”

His lips quivered as he fought a smile—the reluctant one, the devastating one, the one she was beginning to realize had the power to change her whole life. “Okay, now you’re just making things up.”

“I’m not!” she protested. “I’m just calling it like I see it. You’re the beauty, I’m the prince, and the spindle is a literary device meant to shame women into chastity.”

“You are no prince, Sophie Vasquez.”

“How dare you? I could totally be the prince.”

“In this story?” He laughed and shook his head. “I don’t think so. Not when you’re so clearly the dragon.”

Her eyes widened in surprise, the laughter in her throat replaced by a sudden swelling of elation. No man—no person, actually—had ever looked at her and seen anything but a petite approximation of her sisters. She was a little less bright, a little less exciting, a little less strong. She didn’t have their confidence or their drive and had long since reconciled herself to a life lived in their shadows.

Until now. Until she squared off against this magnificent, quarrelsome man who looked at her and unhesitatingly drew his sword.

Because I’m so clearly the dragon.

Unable to hold herself back any longer, she launched her whole body at Harrison. She caught him off guard, a fact borne out by his heavy grunt as she hit him with the full force of her weight. He didn’t budge though. He was too much like a rock, too much like a wall. Everywhere her body touched his was hard. He was warmer than he normally was, exertion giving him a heat that almost felt like a glow.

Which was why she didn’t pull away from it. So much of what Harrison said and did was meant to keep her at a distance, but the way his arms came up to catch her worked a number on her senses. For what felt like the first time, he was letting her in.

In was suddenly the only place she wanted to be. Before his reserve could come back up, she cast aside all of her scruples and fears and did the unthinkable.

She caught him off guard with that too, her lips reaching his while they were still partly open. It was a good thing, because she might not have gone through with the rest of the kiss otherwise. There was something hugely intimidating about attacking a bear of a man with one’s tongue, even if he did look and taste like this one. Besides, he was so much softer than she’d expected.

Oh, his body remained like stone, of course, and his arms were more like a pair of manacles than anything else. Those things were good—those things were great, actually—but nothing could have prepared her for the press of his lips against hers. His mouth was gentle, his tongue, when it slid past hers, like a silken embrace.

It made her yearn to discover the other hidden parts of him, those places where he hadn’t yet turned off against the world. They were all her favorite parts of a man. Not—contrary to popular opinion—the rock-hard abs and rigid cock, but the places were pleasure could be found unexpectedly. The dip of an upper lip, right where the skin began to grow soft. The smooth curve of a well-formed buttock. Any spot where he might let his guard down long enough to admit to being ticklish.

Any part that would cause him to smile.