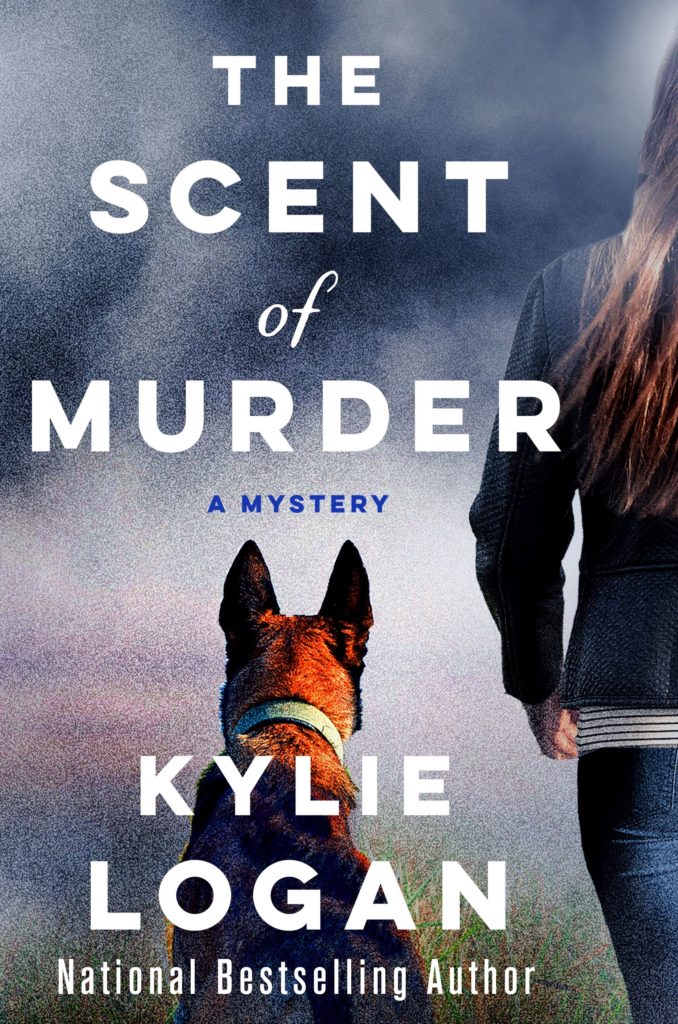 First in a new series from national bestselling author Kylie Logan, The Scent of Murder is a riveting mystery following Jazz Ramsey as she trains cadaver dogs.

The way Jazz Ramsey figures it, life is pretty good. She’s thirty-five years old and owns her own home in one of Cleveland’s most diverse, artsy, and interesting neighborhoods. She has a job she likes as an administrative assistant at an all-girls school, and a volunteer interest she’s passionate about—Jazz is a cadaver dog handler.

Jazz is working with Luther, a cadaver dog in training. Luther is still learning cadaver work, so Jazz is putting him through his paces at an abandoned building that will soon be turned into pricey condos. When Luther signals a find, Jazz is stunned to see the body of a young woman who is dressed in black and wearing the kind of make-up and jewelry that Jazz used to see on the Goth kids back in high school.

She’s even more shocked when she realizes that beneath the tattoos and the piercings and all that pale make up is a familiar face.

The lead detective on the case is an old lover, and the murdered woman is an old student. Jazz finds herself sucked into the case, obsessed with learning the truth.

It had rained that afternoon and the sidewalks were still wet. When the last of the evening light hit them, the slate squares reflected Jazz Ramsey’s neighborhood—streetlights, and the neon signs that flashed from the windows of the trendy pubs, and a watery rendering of St. John Cantius church, an urban Monet masterpiece, its tan brick walls and bell tower blurred. Even though it was officially spring, the wind off Lake Erie was wicked. Jazz bundled her shoulder-length brown hair into a loose ponytail and pulled up the hood of her sweatshirt, then hunched further into her North Face jacket. She stopped at a corner, waiting for the light to change, and was pleased  when Luther sat down at her side even without a command. “Good dog,” she was sure to tell him at the same time she breathed in the combined smell of damp earth and the discarded bag from Taco Bell crumpled near the curb.

To Luther’s credit, he ignored whatever bits and bites of  Mexican cuisine might still be in the bag. But then, he’d been trained to follow different scents. When the light changed, he trotted along when Jazz crossed the street, his pace as brisk as hers, and the way he pricked his ears and cocked his head, she knew he sensed the exhilaration that vibrated from her hand through his leash. Luther knew it was almost time to get down to business.

Here, College Avenue started its downhill trek into the Cleveland Flats, the city’s once-booming industrial heart. These days, Clevelanders were more likely to work in health care or IT than in foundries and factories, but one hundred years ago, this was the route thousands of workers took each day from their homes in blue-collar Tremont—it was simply called the South Side then—to the fiery furnaces that produced America’s steel.

“We’re not going far,” Jazz assured Luther at the same time she noticed the couple who stumbled out of the Treehouse just up ahead made sure to give the massive German shepherd a wide berth. “Just over here,” she told him once they’d passed the open door to the bar and the blaring music that seeped onto the street wasn’t quite so loud. “Over to the new condos.” They stopped outside a sturdy brick building nearly ninety years old with solid walls and a slate roof. By the end of sum- mer, Jazz imagined there would be gleaming glass in the window frames where there was plywood now, and window boxes, too, no doubt, and cars parked outside that reflected the status-conscious success of the young professionals she’d heard were already lined up to buy.

Tonight the building was empty and dark and she had it all to herself.

It was the perfect place to put Luther through his paces.

Still hanging on to the dog’s leash with one hand, Jazz fished the key from her pocket with the other and silently thanked Ken Zelinsky, the site supervisor, who’d agreed to give her an hour’s time inside the building.

She swung open the door and slanted Luther a look. “So what do you think?”

Luther sat, his tail thumping out a rhythm of excitement on the front stoop, and before she unhooked his leash, Jazz did a quick run-through of what she’d learned from his owner. Luther was a little over two years old, good-natured. He could be as playful as any pup, but he had a serious side, too. Like now, when he had to work.

“He’s a smart dog,” Greg Johnson had insisted when he begged Jazz to help with the final stages of Luther’s training. “He just needs some reinforcement from a really good handler. That’s you, Jazz.”

Or at least it used to be.

These days, Jazz was feeling a little rusty. She was out of practice, not in the mood. It was one of the reasons that, after hemming and hawing and finding excuse after excuse, she’d finally agreed to Greg’s request. She needed to shake herself out of her funk, and to her way of thinking, there was no better way to do that than with a dog.

She stepped into the long, narrow entryway of the building with its rows of broken mailboxes along one wall, and shut the front door behind her. The eerie quiet of years of neglect closed around her along with the smell of dampness and decay, rotted wiring and musty tiles carried by an errant breeze. Feeling her way, she unsnapped the leash from Luther’s collar and gave him the command she’d devised for all the dogs she worked with because it was less ghoulish than saying “Find the dead guy!”

“Find Henry!” she told him, and she stepped back and out of Luther’s way.

Like all HRD dogs, Luther was that rare combination— independent enough to go off on his own and loyal enough to owner and handler to need praise. But he didn’t know Jazz well, and smart dog that he was, he wanted to be certain. He glanced over his shoulder at her.

“You know what to do, Luther. You don’t need Greg here to tell you.” She swept a hand along her side. “Find Henry!”

In fact, what Jazz hoped the dog would do was clear both the first and second floors in record time and head up to the third floor where that afternoon she’d hidden a human tooth (a donation from her mother, Claire, who, at the age of fifty- two, had decided she wanted the kind of sparkling smile she’d seen on so many models and had begun to see an orthodontist). Human teeth contained enough scent to attract a properly trained dog’s attention. If Luther was on his game—and she hoped he was because she hated the thought of telling Greg his dog wasn’t ready for the grueling volunteer work done by dogs and handlers—he would locate the tooth, signal by barking three times, and chomp on the treat she would use as a reward while she secured the scene and made a simulated call to the cops, just as she would do if they made a real find.

“You gonna get a move on or what?” she asked Luther, her voice falling flat against the pitted plaster. “Find Henry!”

In a flash of black and sable, the dog took off down the darkened hallway.

After nearly ten years training and handling cadaver dogs, Jazz knew the ropes. She couldn’t give Luther a hint about where to go or what he was looking for so she kept back, letting him work, refusing to influence him by her demeanor or her movements. She heard his claws scramble on the tile floor somewhere in the dark up ahead, flicked on her high-powered flashlight, and followed.

Some dogs, like pointers, are air sniffers. Some, like bloodhounds, keep their noses to the ground. No matter their breed, cadaver dogs, by virtue of their work, have to be proficient at both. They are trained as trailing dogs to pick up the scent that has fallen from decomposing bodies onto the ground, and as air-scenting dogs as well, so they can detect any smell of decomposition that’s carried on the breeze. By the time she located him in a back room of what had once been a four-room working-class apartment, Luther was hard at work.

His eyes focused and every inch of his muscular body at the ready, he drew in a breath then hurried back and forth, side to side, through what had once been a kitchen, in an attempt to catch the strongest scent.

Not here. On the third floor.

Jazz knew better than to say it. Part of an HRD dog’s gift was to eliminate one area so dog and handler could move on to the next. Luther was doing his job, and he was doing it well. She had to remember to compliment Greg on his training methods.

Nose to the floor, his ears pricked, Luther cleared the kitchen and headed into the back bedrooms. Jazz kicked a piece of fallen tile out of the way, but she kept her place. She would wait quietly until the dog emerged from the back rooms and when he headed out into the hallway, she would follow.

At least that was her plan. Until Luther barked.

KYLIE LOGAN is the national bestselling author of The League of Literary Ladies Mysteries, the Button Box Mysteries, the Chili Cook-Off Mysteries, and the Ethnic Eats Mysteries. The Scent of Murder is the first in a new series.

Like this post? Share it with the rest of the world. --->
« Friday Giveaway: The Summer House by Jenny Hale
Review: Booke of the Hidden by Jeri Westerson »