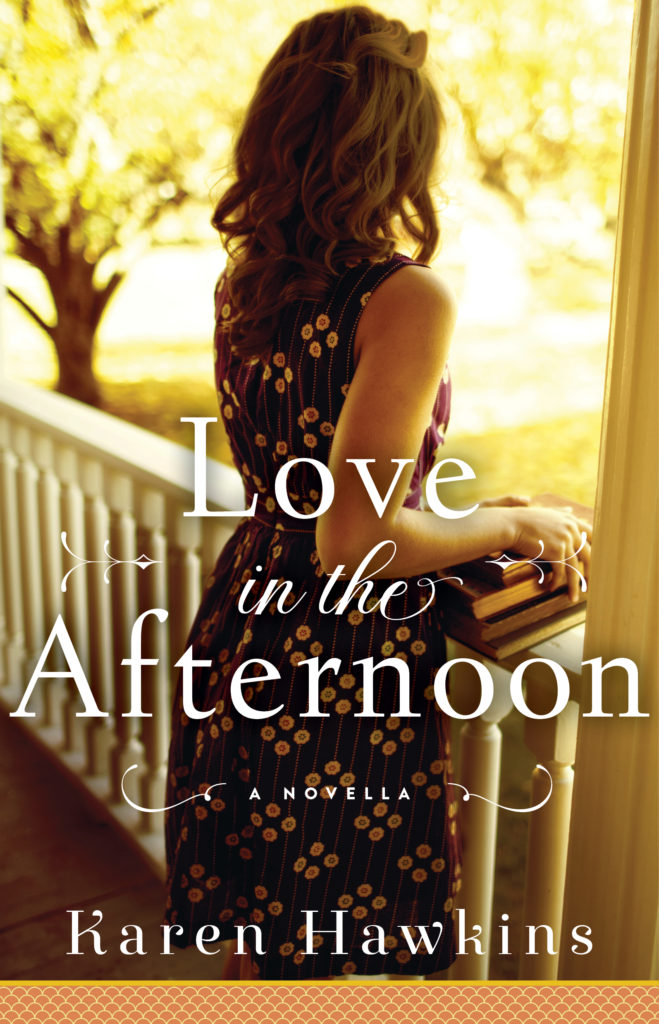 LOVE IN THE AFTERNOON
A Dove Pond eNovella
By Karen Hawkins

Young widow Sofia Rodriquez has just accepted the position of greenhouse manager for Ava Dove’s booming herbal tea business. Sofia is delighted to have found a job that will make use of her gardening skills and allow her to spend time with her son, Noah, who has been diagnosed with Asperger’s. Adding to her joy is the charming farmhouse she’s renting on the edge of Dove Pond.

The only cloud on Sofia’s horizon is her next door neighbor, Jake, whose yard is a thorny jungle worthy of Sleeping Beauty. Soon enough, Sofia discovers that Jake himself is just as thorny and unpleasant as his yard.

After his fiancé left him, work-from-home IT whiz and game developer Jake Klaine has gone from Prince Charming to complete hermit. But Jake isn’t really alone; he’s living with a ghost: a (formerly) hairy man named Doyle who’s a fan of bad puns and who refuses to leave Jake’s bathtub. This is nothing new for Jake, as he’s been talking to ghosts since he was a boy. He finds real people harder to deal with, like the kid next door who won’t stop bugging him about the new game he’s developing.

Sofia and Jake know all too well that life isn’t a game. They’ve both lost the person they loved most. But under the watchful eye of the ghostly Doyle and Sofia’s new friend Ava, who has abilities of her own, Jake and Sofia decide to take a chance and let in an outsider. Soon they discover that, with a little magic, even the thorniest walls are no match for the innocent trust of a lonely child and the fierce determination of a woman wielding a razor-sharp pruner and a heart big enough to make even the most stubborn flower bloom.

Sofia had never met anyone like her new boss, Ava Dove. Ava’s herbal tea business might be growing at an astounding rate but it was Ava’s knowledge of plants that intrigued Sofia. Ava spoke of the plants as if they were people, saying things like “Mint loves sunshine and Bach.” And “Rosemary may seem like a stiff, unyielding sort of plant, but she has a big heart.” If someone had heard Sofia saying anything like that, they would have called her crazy, but for some reason, when Ava said it, it made perfect sense.

And no one could say Ava didn’t know her plants. The greenhouses were filled with fat, happy, leafy plants. And when she walked down the aisles, it seemed as if the plants reached for her, wanting her attention.

It was weird, and yet so satisfyingly wonderful that Sofia found herself just accepting the fact that Ava loved her plants and they loved her back. If only all facets of life were that perfect and simple. In the meantime, Sofia was happy to learn what she could from her new boss and her wonderful greenhouses. The fresh scents made Sofia want to fill her lungs over and over, and the calmness of the space gave her the peace she’d been searching for since The Very Bad Day, while the flexible hours let her spend time with her son, Noah, whenever she wanted. This really is the perfect job.

When her cousin Juana had first suggested Sofia and Noah move from hot and crowded Orlando to quiet and peaceful Dove Pond, Sofia had been hesitant. At the time, she’d been in the middle of a messy, unresolved, painful divorce, and moving would have only complicated things. But Juana had persisted, which wasn’t surprising. Juana’s husband, Tony, said she didn’t know the word no, didn’t want to, and refused to hear it. So when Juana had repeatedly explained why Dove Pond was so perfect for Sofia, how the special education program at the elementary school Noah would be attending was amazing, the community welcoming and friendly, and the town itself “magical,” Sofia had found herself listening. And when the time had come, Sofia hadn’t thought twice—she’d packed up her and Noah’s things and moved here.

Of course she didn’t believe in magic, but she had to admit that so far, despite its slightly worn-out air, Dove Pond was casting a spell over her. She’d desperately needed peace and a place to get away, where she and Noah could heal and start fresh, and Dove Pond had delivered that and more. In fact, the second she’d put her foot outside her car and onto the pavement of Dove Pond’s historic downtown area, she’d felt as if she’d come home.

At first glance, the little town had seemed like every other small town in North Carolina, with two-story redbrick buildings lining an awning-festooned main street, charming tree-lined avenues with an impressive collection of large Queen Anne–style houses, and people more interested in the corn crop than in the sorry state of affairs in DC. But Dove Pond held surprises around every corner—treasures, really—each one a blessing for Sofia and Noah. And the first treasure had been Ava. 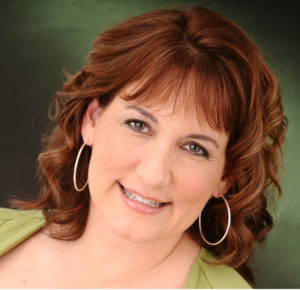 New York Times and USA Today bestselling author Karen Hawkins writes novels that have been praised as touching, witty, charming, and heartwarming. A native Southerner who grew up in the mountains of East Tennessee where storytelling is a way of life, Karen recently moved to frosty New England with her beloved husband and multiple foster dogs. The Dove Pond series is a nod to the thousands of books that opened doors for her to more adventures, places, and discoveries than she ever imagined possible. To find out more about Karen, check in with her at Facebook.com/KarenHawkinsWriter, @KarenHawkinsAuthor on Instagram, and at her website, KarenHawkins.com.

Like this post? Share it with the rest of the world. --->
« Friday Giveaway: Waiting for Tom Hanks by Kerry Winfrey
Spotlight: Kingdom of Exiles by Maxym M. Martineau »