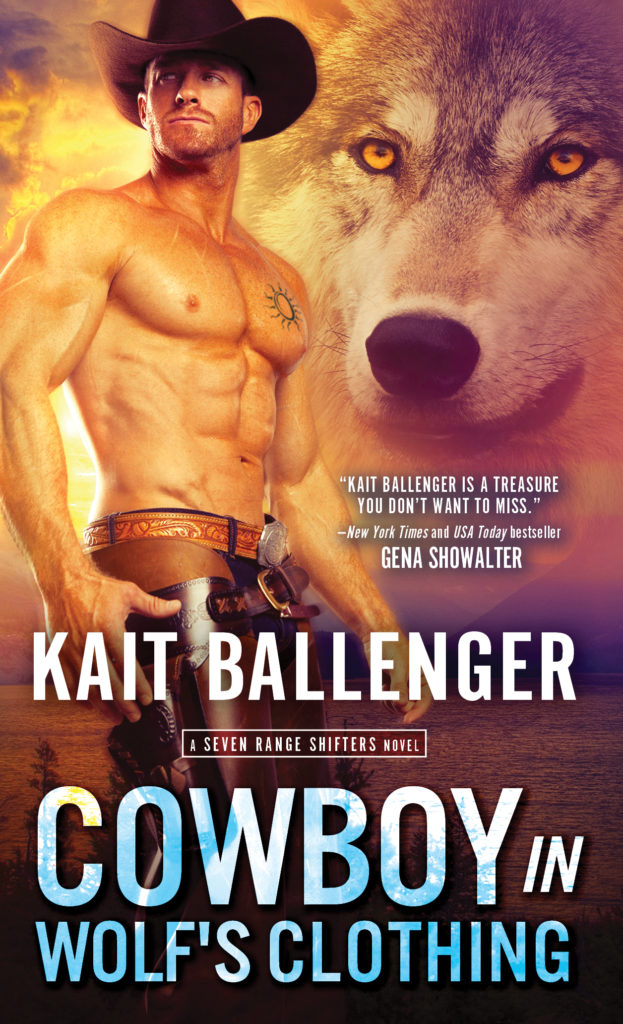 Born a cowboy and bred a warrior…

High Commander Colt Cavanaugh has spent his life defending his pack and its sprawling ranchlands. But the hardened Grey Wolf soldier has a dark secret that could destroy his life forever.

Belle Beaumont is a wanted woman, on the run from the wolf pack that kidnapped her. When fate brings her face-to-face with the Grey Wolf High Commander himself, rivalry becomes passion, and suddenly more than just her freedom is at stake.

Colt will fight to the death for the healing Belle brings to his battle-worn heart—and for this cowboy wolf, all’s fair in love and war…

What People Are Saying About Kait Ballenger:

“Good,” he said. “That leaves us time to discuss another negotiation.”

She raised a brow, pushed herself to standing, and crossed the clearing to return the spare adhesive and gauze to his saddlebag. “And what would that be?”

As she faced toward him again, a wicked grin crossed his lips. “The night we’re going to spend together.”

He’d surprised her when he’d let slip that he wanted to protect her. Help her. But…Belle couldn’t have heard him correctly, could she?

“I want to make it clear that our prior agreements still stand, and they have no relation to your decision. Regardless of my position, you have a choice, of course.”

Maybe she had heard him correctly. He couldn’t possibly be serious. She gaped at him. Yes, there was heat between them. Tension. She sensed it too. But she wasn’t about to admit that. Definitely not to him. She couldn’t risk another relationship with an alpha wolf—no matter how attractive and brave he might be, or how tempting the offer. No matter how much she wanted to see that softer side of him again.

No. She needed to nip this in the bud before it got out of hand.

She settled on being saucy. It worked with him, and that seemed to be the only way they could converse without her simultaneously wanting to pull her hair out and feeling weak in the knees whenever he looked at her. “Do you often try to piss off women who saved your life?”

“Only when I’ve already seen them naked.”

She knew he was teasing, but still she forced a snarl.

Those intense gray eyes locked on to her, causing her stomach to fill with traitorous butterflies. “Is that what I do you to, Belle? Piss you off?”

The question was so to-the-point that it caught her off guard. She wasn’t certain she could define how he made her feel. Yes, there was frustration, but there was also something…more. Something complicated.

At her lack of response, he smirked. “I didn’t think so.”

“What’s that supposed to mean?”

He shrugged. “Only that you wear your emotions on your sleeve. You can glare and pucker those full pink lips at me like you’ve tasted something sour all you want, Belle, but your eyes give you away.”

She raised a brow. “Oh really? And what do they say?”

His gaze locked with hers. “They say that our verbal sparring doesn’t really piss you off at all. In fact, I’d go so far as to say you not only like it, you crave it.”

She laughed. “That’s absurd. I barely know you.”

“You don’t need to know someone to be attracted to them.”

“Me? Attracted to you?” She crossed her arms over her chest. “Not a chance.”

“You enjoyed when I held you naked against me—in the clearing.” He said it with such utter confidence, as if he knew it without a doubt. “You can’t deny that.”

She could, and she would for that matter, even if it wasn’t true. “Don’t flatter yourself, Colt.”

He chuckled darkly, pushing from where he sat on the log to stand. At his full height, he was all the more intimidating, towering over her. “I don’t need flattery. Most women find me attractive. It’s a matter of fact. Some are better at hiding it than others.” Those steely eyes fell to her. “But you’re not one of those women, Belle. You can’t hide your emotions, even when you try.”

She was hiding more from him than he’d ever know. “I’m not like most women.”

“No, you’re not,” he agreed. Colt’s eyes narrowed, and he stepped closer to the fire, staring into its depths. The flames burned bright, casting a dim orange glow on his face and creating shadows that hollowed the sharp lines of his cheekbones. “Most women bat their eyelashes, smile, and giggle when they find a man attractive. You, on the other hand, do the opposite. You narrow those pretty hazel eyes, pucker that little mouth, and let that viper-tongued wit fly, but it’s a defense mechanism. I’m a commander, Belle.” His gaze flicked toward her. “I know a defense tactic when I see one.”

“You think you have me all figured out, don’t you?”

“No.” He chuckled. “I know a challenge when I see one, and you work hard to be a challenge, Belle. But if the look in your wolf eyes is any indication, you may be a challenge, but you’re not as difficult to solve as you think. Not for me.”

She scoffed at him. “You’re not my type at all.”

It wasn’t true. Not in the slightest. But she needed to try to keep him at arm’s length. Her experiences with Wyatt had taught her that. It didn’t matter that she wanted otherwise. Before Colt, Belle hadn’t been certain she had a type, but with each passing second, she became more certain that if there were a reference book of her life, under “Belle’s type” Colt Cavanaugh’s picture would be the definition. See synonyms for reference: worst fear, here-comes-trouble, and The Devil Wears a Cowboy Hat.

There was that wolfish grin again. He saw straight through her. “Could have fooled me.” He turned away from the fire and drew closer. “I saw your desire in the clearing, felt the way you melted into my arms.”

Her hands clenched into fists. She was quickly losing this battle. “I was faking it.”

He shook his head, that grin still curving his lips in the slightest tilt as he prowled toward her. “You’re lying.”

He stood in front of her now, less than a foot away. She retreated until her spine pushed flush against one of the mighty pines behind her. The width and breadth of his shoulders dwarfed her, but still she fought to regain control. This was no more than one of his power plays.

“Then prove it.” The words slipped from her lips before she could stop them.

Those metal-gray eyes burned a molten liquid steel. “There are two things you need to know about me, Belle. The first is that I hate to be defied. As a commander, I’m more than used to getting my way. In fact, I damn well expect it. The second is that I never back down from a challenge”—his next words were a near growl—“because I always win.”

Her eyes narrowed. “Do your worst, Commander.”

Kait Ballenger earned her B.A in English from Stetson University followed by an M.F.A in Writing from Spalding University. After stints in multiple careers, Kait finally decided that her eight-year-old self knew best: that she was meant to be a writer. Kait lives in Florida with her husband and young son. Follow her at www.kaitballenger.com

Like this post? Share it with the rest of the world. --->
« Review: Sweet Wild of Mine by Laurel Kerr
Spotlight: Ruby’s Outback Love by Susan Horsnell »