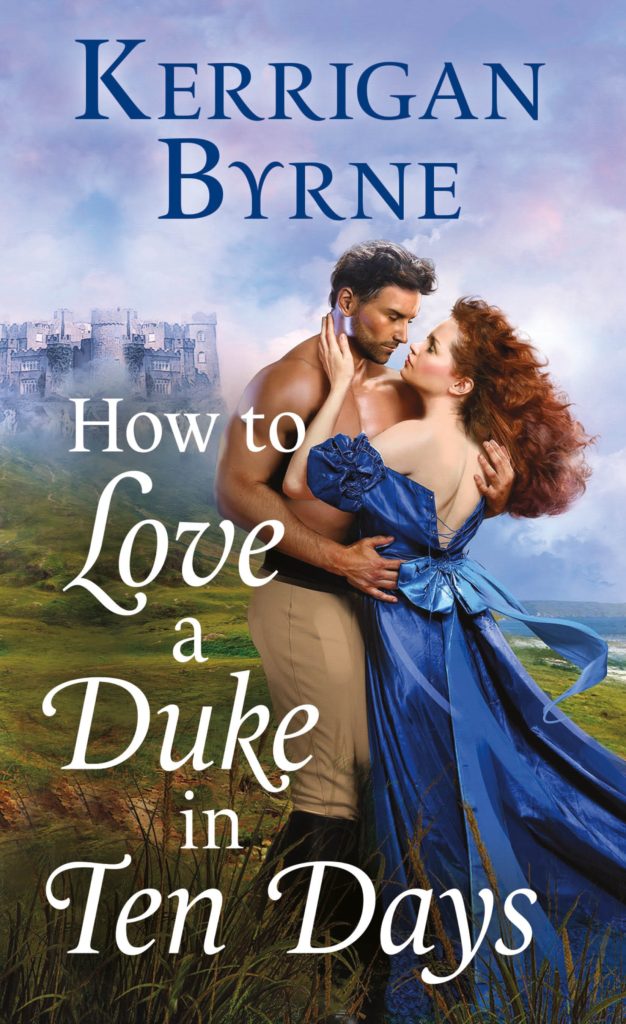 How to Love a Duke in Ten Days by Kerrigan Byrne

These men are dark, bold, and brave. And there is only one woman who can bring them to their knees…

Famed and brilliant, Lady Alexandra Lane has always known how to look out for to herself. But nobody would ever expect that she has darkness in her past—one that she pays a blackmailer to keep buried. Now, with her family nearing bankruptcy, Alexandra strikes upon a solution: Get married to one of the empire’s most wealthy eligible bachelors. Even if he does have the reputation of a devil.

Piers Gedrick Atherton, the Duke of Redmayne, is seeking revenge and the first step is securing a bride. Winning a lady’s hand is not so easy, however, for a man known as the Terror of Torcliff. Then, Alexandra enters his life like a bolt of lightning. When she proposes marriage, Piers knows that, like him, trouble haunts her footsteps. But her gentleness, sharp wit, independent nature, and incredible beauty awakens every fierce desire within him. He will do whatever it takes to keep her safe in his arms.

Accept the invitation to Castle Redmayne. I’m in danger. I need you.

The first, she had been unable to stop fretting for Francesca, who tended to give more than the appropriate amount of context. The terse, vague note Alexandra now held was more of a warning than the message contained therein.

The second, she could no longer afford a first-class, private railcar, and had, for the last several tense hours, been forced to share her vestibule face-to-face with a rough- featured, stocky man with shoulders made for labor.

He’d attempted polite conversation at first, which she’d rebuffed with equal civility by feigning interest in her correspondence. By now, however, they were both painfully aware she needn’t take four stops to read two letters.

It was terribly rude, she knew. Her carpetbag remained clutched in her fist the entire time, except when her hand would wander into its depths to palm the tiny pistol she always carried. The sounds of the other passengers in adjoining vestibules didn’t make her feel safer, per se.

But she knew they would hear her scream, and that provided some relief.

For a woman who’d spent a great deal of the last ten years in the company of men, she’d thought these painful moments would have relented by now.

Alas, she’d become a mistress of manipulating a situation so, even if she had to endure the company of men without a female companion, there would be more than one man. In the circles she tended to frequent, people behaved when in company.

It had worked thus far.

Alexandra braced herself against the slowing of the train, breathing a silent prayer of relief that they’d finally arrived. She’d been terrified that if she’d glanced up once, she’d be forced into conversation with her unwanted companion.

Rain wept against the coach window, and the shadows of the tears painted macabre little serpents on the conflicting documents in her hands. One, a wedding invitation. The other, Francesca’s alarming note.

A month past, she’d have wagered her entire inheritance against Francesca Cavendish’s being the first of the Red Rogues to capitulate to the bonds of matrimony.

A month past, she’d assumed she’d had an inheritance to wager.

Their little society had seemed destined to live up to the promise they’d once made as young, disenchanted girls to never marry.

Until the invitation to an engagement masquerade— given by the Duke of Redmayne—had arrived the same day of her friend’s cryptic and startling note.

The invitation had been equally as ambiguous, stating that the future duchess of Redmayne would be unveiled, as it were, at the ball. Included in Alexandra’s particular envelope was a request for her to attend as a bridesmaid.

The subsequent plea for help from Francesca—Frank— had arrived in a tiny envelope with the Red Rogue seal they’d commissioned some years prior.

Alexandra hadn’t even known Francesca had returned from her romps about the Continent. Last she’d heard, the countess had been in Morocco, doing reconnaissance of some sort. Nothing in her letters had mentioned a suitor. Not a serious one, in any case. Certainly not a duke.

Francesca had a talent for mischief and a tendency to interpret danger as mere adventure.

So, what could possibly frighten her fearless friend?

A risky venture, to be sure.

Whether she’s writing about Celtic Druids, Victorian bad boys, or brash Irish FBI Agents, USA Today bestseller Kerrigan Byrne uses her borderline-obsessive passion for history, her extensive Celtic ancestry, and her love of Shakespeare in every book. She lives at the base of the Rocky Mountains with her handsome husband and three lovely teenage girls, but dreams of settling on the Pacific Coast. Her Victorian Rebels novels include The Highwayman and The Highlander.

Like this post? Share it with the rest of the world. --->
« Spotlight: Avenged by an Angel by Felicity Heaton
Cover Reveal: Outmatched by Kristen Callihan and Samantha Young »