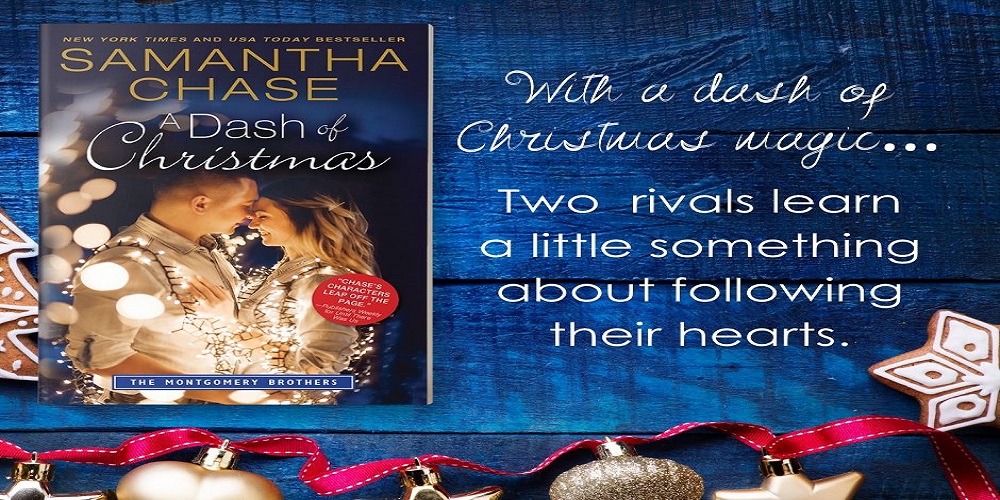 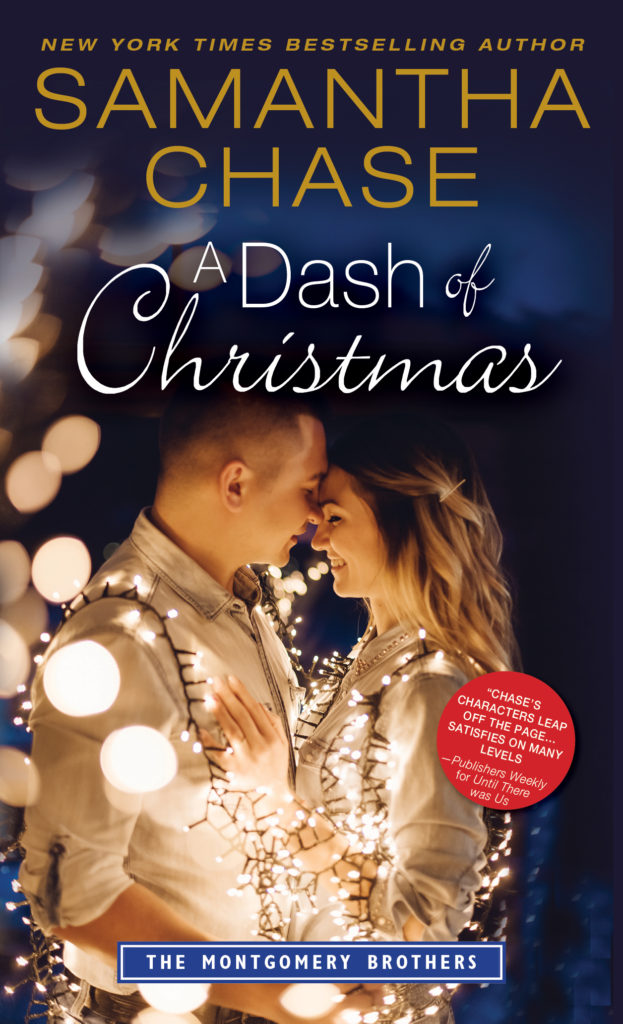 A Dash of Christmas
By Samantha Chase

“The perfect blend of heart and sass.”—Publishers Weekly for Holiday Spice

With a dash of Christmas magic…

Two people who have spent most of their lives being rivals…

Learn a little something about following their hearts…

Carter Montgomery broke the family mold when he went to culinary school. Now a successful restauranteur, he’s at a crossroads: should he continue on his successful path or look for a new challenge? What he needs is time alone to think things through. But his matchmaking family has other ideas…

Emery Monaghan’s no-good fiancé has embroiled her in scandal and she needs a way out. When mentor Eliza Montgomery offers her a refuge, she’s relieved—until she realizes that the deal means rubbing elbows with Eliza’s son Carter—Emery’s childhood nemesis.

His voice was raw and it wasn’t hard to tell there was a battle waging within him. Normally, Emery enjoyed watching Carter squirm and struggle, but for some reason seeing him this emotional after a call with his mother affected her in a way she didn’t expect.

She felt compassion for him—a need to comfort him and tell him it was going to be all right.

She made her way toward him. “I think it would be best for everyone if I did. You didn’t deserve to be blindsided like this, and I’m sorry it happened this way. I truly believed you were aware of what was going on and you were coming here specifically to work on the book. I had no idea your trip here had nothing to do with it or that you were so against giving it more attention.”

Carter’s shoulders sagged a little. “At any other time…”

“I know,” she said softly, moving a little closer. “I get it. Hey, there isn’t anything I can do about whatever else you’re dealing with, but on this particular subject, I can. I’ll work with the files you sent your mother and I’ll make it into something closer to what she’s looking for, okay? And in the meantime, I’ll stay out of your way so you can have at least one night’s peace.”

They stood in silence for a long time, and as much as Emery wanted to pack and get out of his way, she couldn’t seem to make herself move. In all the years they had known one another, they had bickered and poked fun at each other and essentially gone out of their own way to make the other miserable. It was what they did. It was comfortable. But right now, she couldn’t think of a single snarky or antagonistic comment.

And that freaked her out.

Swallowing hard, she took a step back. And then another. Next thing she knew, she had spun and was walking back to her bedroom, mildly trembling. She went straight to her closet and pulled out her weekender bag. Knowing she wasn’t going to be going out or doing anything other than vegging in her hotel room, she walked over to her dresser and pulled out a couple of pairs of yoga pants, a few T-shirts, a pair of pajamas, and a pair of shorts and tossed them in the bag. Next, she opened her lingerie drawer and was pulling out a handful of panties when a large male hand closed over hers. Gasping with surprise, she turned and found herself face-to-face with Carter.

While they both held her panties.

Emery wanted to be outraged—or at the very least annoyed that he had invaded her space when she was clearly trying to be the bigger person here, but for some reason she couldn’t seem to make herself speak or react.

What was happening to her?

“This is crazy,” he said, his voice deep and low and borderline hypnotic.

So he felt it, too? This sudden, crazy pull toward one another? The change in the air around them?

“I already said I didn’t want you to go, Em,” he went on and that’s when she realized what he was talking about.

Forcing her gaze away, she carefully pulled her hand and underwear from his. “I think it’s for the best.” Then she moved away, tossing her garments in the weekender bag along with the rest of her clothes. For a few minutes, she busied herself collecting odds and ends—her laptop, her e-reader, her iPod—before going into the bathroom and grabbing her toothbrush, makeup, and brushes. Anything else she needed she’d get from housekeeping. When she walked back out into the bedroom, she found Carter sitting quietly on her bed.

And her weekender bag emptied.

Okay, now she was outraged.

“Seriously, Carter?” she cried. “Why can’t you just let me do this?”

He shrugged. “I already told you. It’s not necessary.”

“To me it is! There’s no reason for me to stay here. And, might I remind you, I’ve been a thorn in your side since we were kids!”

It pleased her that he paled a little at having his words thrown back at him.

“I would think you’d be thankful that I was leaving,” she said, hating the tremor in her voice. “One less thing for you to worry about.”

The curse that flew out of his mouth followed by a huff of annoyance didn’t really surprise her. This was them. This was the relationship they had. And honestly, she preferred this to the strained silence and whatever it was that she was feeling just minutes ago.

Carter stood and walked over until they were toe to toe. “What I said to my mother,” he began and then stopped. “What I mean is, that was said in the heat of the moment and really, it couldn’t have been news to you. I’ve been telling you that to your face since we were twelve.”

“Eleven, but…whatever,” she corrected and smirked when he growled with frustration.

“That! That right there is why I said it! Can’t you just let some things go?”

“Me?” she cried. “How about you? I was being the bigger person here! I was putting your feelings first, and where did that get me, huh? I should be in a cab on my way to a hotel with room service, but instead I’m here arguing with you again! Why couldn’t you just let me leave?”

They both instantly fell silent and Emery felt herself holding her breath while she waited for his answer.

“What’s the matter?” she finally asked. “Is it possible the arrogant Carter Montgomery has nothing to say for himself for the first time in his life?”

Yeah, she was taunting him, but…she needed to. Needed things to be like they always were. If she didn’t get them back on solid ground—back on the familiar turf of a lifelong rivalry—she wouldn’t know what to do. For years she’d been aware of Carter as a person. She couldn’t deal with suddenly being aware of him as a man.

When his only response was a slight tick in his jaw, she figured she’d poke the bear a little more. “Did you burn the sauce? Is that why we’re not eating yet? Or maybe you realized all that pretentious crap you bought was no better than grabbing a couple of slices from the pizzeria on the corner.” She noted he seemed to be almost inflating before her eyes—his posture straightened, his shoulders seemed to grow broader…

He was breaking molars now, no doubt.

“Not that it matters. I’ve got some microwave popcorn I can have for dinner, along with the last brownie. That’s the kind of stuff I can count on—and will probably be a lot more enjoyable.”

This time when Emery tried to move away, Carter’s large hand on her arm stopped her.

She had to hide her smile of satisfaction. “Problem?” she asked innocently.

“You’ve got a real smart mouth, Emery, but you don’t know what the hell you’re talking about.”

She shrugged. “Fine, whatever. Now, if you’ll excuse me, my dinner awaits.”

“If you so much as think of making popcorn for dinner, I’ll strangle you,” he said, tugging her closer.

When she leaned in until they were nose to nose, she said, “I dare you.”

“Such a smart mouth,” he said right before he claimed it.

“Chase’s three-dimensional characters leap off the page, encouraging readers to sit down, put their feet up, and enjoy…charming.”—Publishers Weekly for Until There Was Us

“Chase just gets better and better.”—Booklist

New York Times and USA Today bestselling author Samantha Chase has published more than twenty romance novels, with over half a million copies sold. Visit her at www.chasing-romance.com. She lives with her husband and their two sons in Wake Forest, North Carolina.