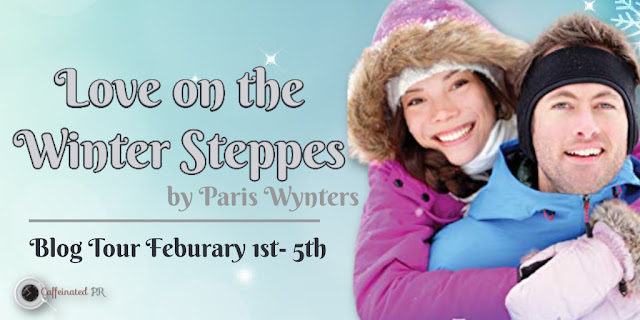 Today I am excited to share Paris Wynters’ newest offering Love on the Winter Steppes. It’s a sweet contemporary romance that’s perfect to snuggle up with on a chilly winter afternoon. 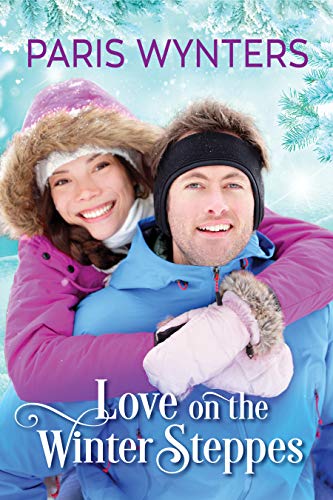 Can a magical day at the Ice Festival melt this career-focused woman’s heart?

Marketing consultant Qara Whitaker loves her job, happily putting in endless hours and working through holidays. But when her grandmother asks that she accompany her on a birthday trip to Mongolia to visit their family, Qara can’t say no. Packing up her laptop, Qara boards the plane—never imagining that a shared cab ride with a stranger will change her life forever.

Hoping to push through writer’s block, author Benjamin Lacoy hops on a plane to Mongolia looking for inspiration. A chance meeting with a beautiful and intelligent woman whose smile ignites his heart leads to them playing tourists. Sparks fly and Ben is feeling far more than inspiration, yet each time he and Qara get close, she’s distracted by work.

Ben is torn; he likes Qara, but he always promised himself he’d never let work come before family and friends like his parents did. Opposites clearly attract, but can they learn to balance work with love in order to build a future together?

Ben hung up just as the doors opened. He stepped out and when he turned the corner into the lobby he was met with a chorus of voices as groups of people waited for the buses that would bring them to various outings. He scanned the crowd for a few minutes and finally spotted Qara, who was waving their tickets in the air trying to catch his attention.

He waved back and headed her way. “Hope you’re dressed nice and warm. I’d hate to have to tell your grandmother I let her granddaughter turn into a human Popsicle.”

She tugged her beanie down. “Don’t worry, I wore layers.”

“Trust me, I wasn’t worried. In fact, I’d be surprised if you didn’t bring extra layers, just in case.” Ben chuckled when Qara’s gaze dropped to her carryall, where a neatly folded blue sweatshirt peeped out of the top.

“Keep laughing. We’ll see who’s laughing when you fall off your reindeer and are begging me for something that isn’t soaking wet.”

Ben cocked a brow. “Do you really think your sweatshirt would fit me?”

“Um…” Her gaze darted to his chest and then quickly away. She ducked her head, but he could still see the pink flush to her cheeks. Okay. It was official. She was too adorable for words. Although, he’d never tell her that.

Qara made an indignant sound in her throat. “For someone who said she wasn’t feeling that great, she certainly seemed to have a spring to her step as she headed back to the room.”

In the short time he’d spent with Khulan, he’d come to realize she had a playful side. “She does seem a little mischievous.”

“You have no idea. She and Rose are like two peas in a pod.” While her tone sounded resigned, Ben could see the love for her family in the softening around her eyes and mouth.

He shrugged to hoist the strap of his bag higher on his shoulder. “Where’d Rose head off to?”

Qara exhaled, the forced breath pushing a strand of hair from her eyes. “She claims she’s heading back to the puzzle museum. But, honestly, I wouldn’t be surprised if she ended up finding a tavern that had karaoke tucked away deep in the city. You know, maybe Jakob has to beat his reindeer friend in a magical karaoke competition.”

His heart warmed that Qara had remembered his story. With the way her eyes had closed when he’d been talking about it yesterday, he’d sort of thought she’d dozed off. “Reindeer can’t actually talk. That wouldn’t be believable.”

Her laugh was magical in and of itself. Bubbly and musical. “So magic portals and telepathic reindeer are totally possible, but singing reindeer aren’t?”
“Obviously.”

She bit her lip, trying to maintain a straight face. “Good to know. I promise not to make that mistake again.”

He nodded. “See that you don’t.” Then he ruined his serious expression with a grin. “Since we have everything all cleared up, shall we?” He nodded at where a bunch of people had started to form a line.

“Oops, definitely. Sorry, I forgot what we were doing there for a second.” A furrow formed over her nose, like she wasn’t used to forgetting things and wasn’t very pleased that she had.

But he found it sweet she’d been so caught up in teasing him she’d neglected her surroundings. And as they hurried to get in line, Ben couldn’t keep the smile off his face. He had a good feeling about this trip. 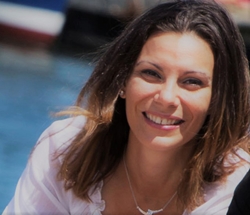 Paris Wynters is an adult romance author repped by Tricia Skinner at Fuse Literary. She lives on Long Island in New York with her family, which includes two psychotic working dogs. Paris is a graduate of Loyola University Chicago. Paris and her son are nationally certified Search and Rescue personnel (she is a canine handler). She is a huge supporter of the military/veteran community. When not writing, Paris enjoys playing XBOX (she is a huge HALO fanatic and also enjoys FORTNITE), watching hockey (Go Islanders), and trying new things like flying planes and taking trapeze classes.

Like this post? Share it with the rest of the world. --->
« Spotlight: Happy Singles Days by Ann Marie Walker
Friday Giveaway: Summer at Buttercup Beach by Holly Martin »

5 responses to “Spotlight: Love on the Winter Steppes by Paris Wynters”