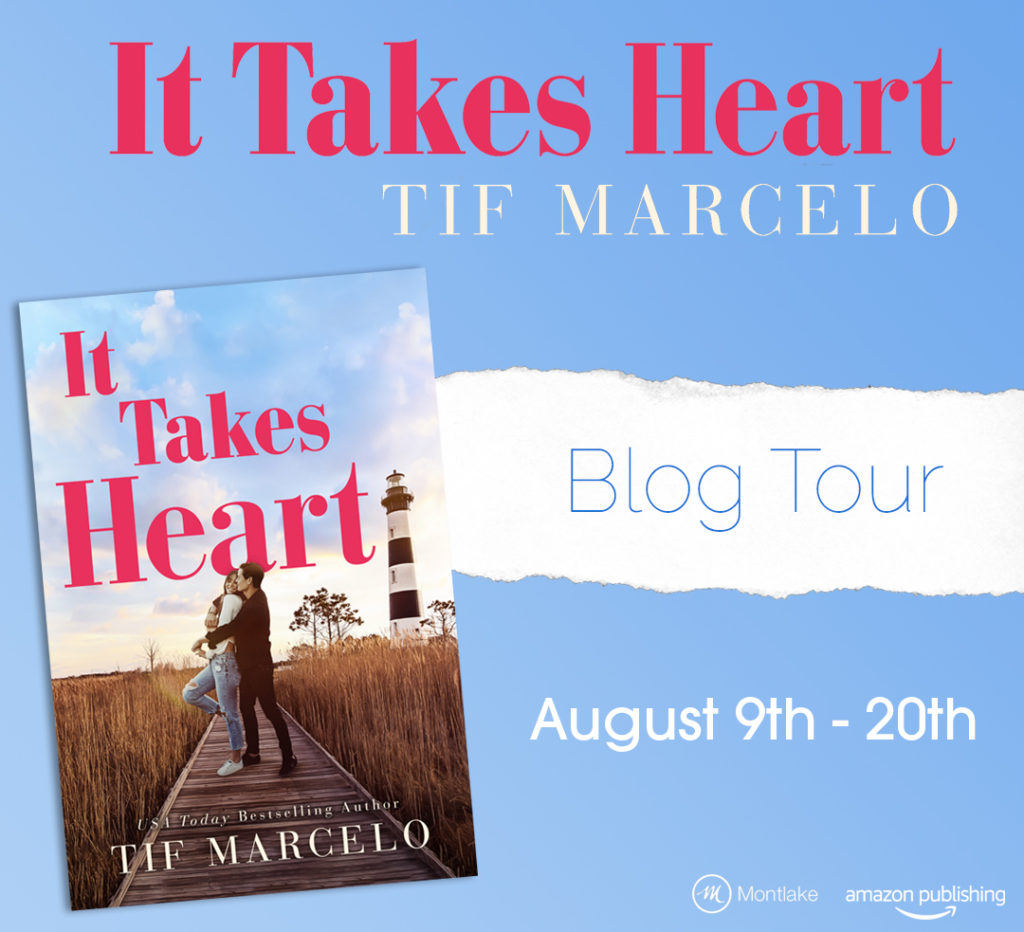 It was at the Romance Writers of America conference in 2019 when I came up with the idea for the Heart Resort series. Though I was under contract for a third contemporary fiction book (which would become my sixth novel), my first three books were romance novels, and an escapist series tugged at my shirt sleeves. My initial idea: interconnected destination romance novels with the setting as relaxing and lush as it could be, despite the romantic angst and family drama I knew my characters would be placed in.

Then came COVID-19. I had released my second contemporary fiction, ONCE UPON A SUNSET, and was in edits for IN A BOOK CLUB FAR AWAY, and I was no longer under contract for future books. My need to escape heightened during the fear of lockdown. So, I dove headlong into the proposal of the Heart Resort series. At first, I thought of setting this book on an island in the Pacific Ocean but I could not make myself write it knowing that the borders were closed to travel due to the virus. Though I tried not to put COVID into my novels, still I needed to be realistic for the times.

Then the location dawned on me: our family’s most favorite vacation spot: the Outer Banks, or OBX. And especially south of 12: Nags Head, Rodanthe, Hatteras. On a printed map, I drew what would be the Heart Resort peninsula, connected to highway 12 via a land bridge.

Heart Resort is serendipitously heart-shaped. In the epicenter is the headquarters and the apartments of the four Puso siblings. Puso, which means “heart” in Tagalog—of course it does! Chris, Gil, Bea, and Brandon, the four Puso siblings, live and work on this resort. They are the heart, they make the resort and peninsula “go.” Though, we come to find out that they each have their own secrets and matters of the heart to contend with.

Everything on this peninsula is specific and special. Each home is named. Every employee is family. The view from every window is spectacular. And though they promise their clients their own version of the HEA, or the happily ever after, the Puso siblings clamor for theirs.

IT TAKES HEART, the first in the series, introduces Brandon Puso and Geneva Harris, former lovers reunited in their common mission to help rebuild the resort after a tropical storm. Neither knew the other was going to be there, and their first instinct is to run. But both are loyal to a fault, and soon they find themselves growing closer despite their best intentions. Surrounding them are a cast of characters, all with their stories to tell, all while trying make the resort successful despite throes of competition with another resort.

Love, loyalty, and business all in one peninsula located at one of the most gorgeous locations in the United States. Heart Resort is truly a place to read about to get your heart pumping. 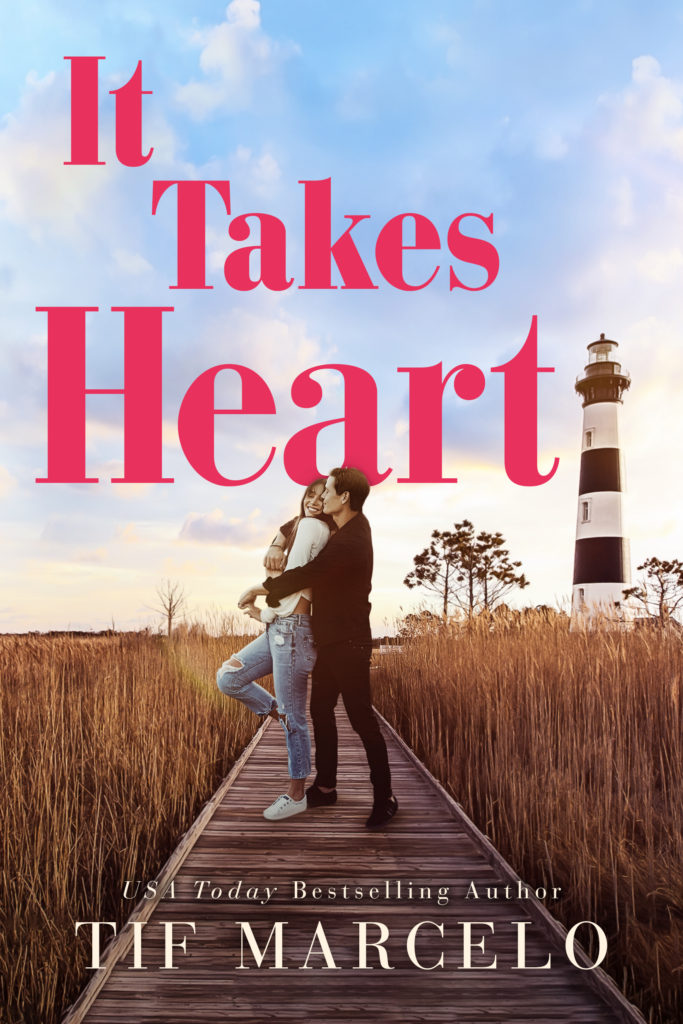 Heart Resort, a private resort in the Outer Banks, is a romantic getaway for couples but a hotbed of family drama for its proprietors, the Puso family. Brandon Puso, the youngest of the four siblings, prefers life on his own as a licensed contractor in DC after a falling-out with his eldest brother.

After a hurricane plows through the Outer Banks, Brandon has a change of heart. He returns to the resort to help with the grand reopening but encounters his big sister’s best friend, designer Geneva Harris, who’s there to do the same thing. But Geneva and Brandon have a secret. Years ago, they had a secret romance that ended in heartbreak.

With the resort’s future at stake, Brandon and Geneva decide to put the past aside and to keep peace with the family. But as their mutual attraction heats up, they have to decide if history will repeat itself—or if this time, love gets a second chance.

Brandon tripped over his own feet as his sister leapt from her chair.

“Now it’s my turn to surprise you.” Beatrice wrapped her hands around his bicep and pulled him toward the round table. She was laughing, enthused.

But Brandon, simultaneously exhausted from a fitful sleep and amped from laborious work that morning, could not grapple with what was before him. He was seeing a ghost. Or, rather, he was seeing the living, breathing apparition of the woman who had all but ghosted him.

He shut his eyes for a beat to clear his vision, but when he opened them and refocused, she was still there.

“Geneva,” he breathed out.

The Geneva Harris he’d fallen for four years ago after a stunning three weeks together. The same Geneva Harris who, after an argument, had left him to wake alone the next morning with her side of the bed all tucked back into place as if she’d never been there. Like she had been a vivid dream.

The memory yanked Brandon’s heart out of his chest, leaving a cavernous space. He’d had a myriad of feelings over the years after their breakup: loss, anger, sadness. Now, all he felt was nothing—was this shock? No, shock was the brick wall he couldn’t get around when his parents died. This felt like . . . emptiness.

He was dumbfounded even as he got close enough to reacquaint himself with the details of her face: her high cheekbones, which even without makeup carried a muted shade of pink; the one tiny mole next to her nose; and what he now knew was a forced smile because it was this exact same smile she had placated him with the night before she had taken off.

Beatrice dragged him down to sit in the chair across from Geneva, then took the third seat at the table. “You remember Geneva, right?”

The cue threw him off his running thoughts. Time had passed. They were not in Las Vegas, but in Heart Resort. His family didn’t know about them. “Oh, yeah. Hey. Sorry, I’m just a little . . .” He stuck a hand out.

What looked like relief played across Geneva’s features. She shook his hand. “It’s okay. It’s the ocean air. Nice to see you again.”

“How long has it been for the both of you? Since we left for school?” Beatrice asked.

“Four years.” Geneva echoed his thoughts, eyes leaving his sister’s face, then down to her drink. “Chris and Eden’s wedding.”

“How could I forget.” Beatrice bumped her forehead with a palm. “I take that back. Of course I forgot—I planned that event and was probably stressed to high heavens. Now that was a whirlwind.” Then, to Brandon, in a change of subject only Beatrice could manage, gestured to their surroundings. “Did you want me to order? I assume that you’re here for lunch. Chef Castillo pivoted to feed us even if our restaurant’s closed. Oh, just as an FYI, our new Friday dinners are now at Chef Castillo’s and her sister’s eatery, south on 12.”

That took his attention for a beat. “A Filipino restaurant, down here?”

“Yep. So keep your Friday night free, both of you. It’s required.” She grinned. “So, what’s your poison.”

“Actually, I’m good.” Whatever appetite he’d had disappeared. “I spotted your golf cart and thought I would stop to say hi before my first meeting with the team.”

“Perfect timing! I was telling Geneva about your demo sesh this morning. You might have been exactly where Geneva’s was. She’s in Ligaya.”

Brandon had found it clever that the family had decided to assign a Tagalog word for each of the cabins, the yoga studio, and restaurant. It had been Gil’s idea, though taken right out their parents’ playbook of hammering their wooden sign at every residence.

“Ah . . . I was definitely next door, at Habang-buhay.” Brandon snorted at the irony, that he’d demoed a beach house that was named forever, and all that morning, she had been just beyond his reach in a cabin whose name meant joy.

She had been his joy, once. 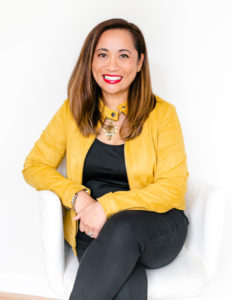 Tif Marcelo is a veteran US Army nurse who holds a BS in nursing and a master’s in public administration. She believes in and writes about the strength of families, the endurance of friendship, and the beauty of heartfelt romance—and she’s inspired daily by her own military hero husband and four children. She hosts the Stories to Love podcast, and she is also the USA Today bestselling author of In a Book Club Far Away, Once Upon a Sunset, The Key to Happily Ever After, and the Journey to the Heart series. Sign up for her newsletter at www.TifMarcelo.com.