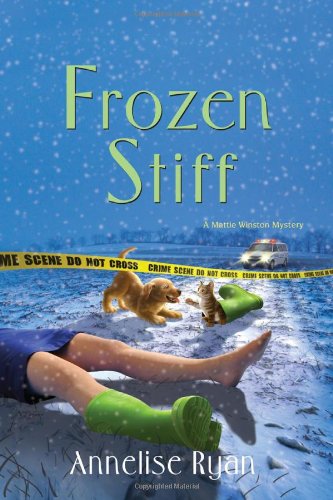 Death is never pretty, and deputy coroner Mattie Winston’s latest case is no exception. But this victim certainly was strikingly beautiful. . .before someone stuck that knife into her chest.

Mattie knows everyone in the charmingly small town of Sorenson,Wisconsin, so the deceased is definitely a stranger from out of town. If a woman this attractive had moved into town, the news would have surely hit the gossip mill in record time. So what was the victim doing here, laid out in this desolate field?

Things only get murkier with the arrival at the scene of the usually stoic and dependable detective Steven Hurley; one look at the body and he turns as white as the newly fallen snow. . .and excuses himself from the case. It turns out the victim was a top investigative reporter from Chicago, and Hurley not only knew her. . .they dated a year and a half ago, until she broke it off. While Mattie grapples with her jealousy of a gorgeous dead woman, Hurley swears her to secrecy and tells her. . .that knife in his ex’s chest is his!

It’s a case with more twists than Maddie’s own crazy love life, and it’ll take all of her forensic skills to unravel the increasingly bizarre clues and find the killer. . .before she herself becomes just another cold case!

The story is about Mattie Winston, who is recently separated from her surgeon husband and as well as her job as an OR nurse.   She is now working as an Assistant M.E. in the small town of Sorenson, Wisconsin.   This is the third story in the series, and although I haven’t read the first two, I had no trouble in following along with the characters and the backstory.

In this case, Detective Steven Hurley, who Mattie is romantically interested in, is being linked to various murders in their small town.   But is he a crazed killer or being set up, and by whom?  Hurley wants Mattie’s help to clear his name, but is she letting her hormones rule, in trusting a man what might be dangerous.

If you looking for a deep, psychological thriller, look elsewhere.   This is a deliciously witty, and lighthearted book.   Mattie Winston is a delightful character, and I enjoyed her sarcastic whit.  It is a nice change of pace that the heroine is a normal, slightly imperfect woman, who’s smart but a little quirky.  Since she is recently separated from her cheating husband, and is getting mixed signals from handsome Steve Hurley, she does spend some time questioning her physical flaws, especially while looking over the beautiful (although dead) ex-girlfriend of Hurley.

I certainly chuckled enough to make this well worth the read.  I enjoyed this story enough that I am adding the first two to my list of books to read, and I am going to keep an eye out for the next book in the series.

From what I can see in the beam of the flashlight, the inside of the cabin isn’t much better than the outside.  The place is primarily furnished with cobwebs and the few pieces of human furniture look like something I might see at the estate sale of someone’s great-grandmother.  The air smells musty and damp, and I hear something scurrying about off in one corner.

“I think I should have let Parking Lot Guy grab me,”  I say.  “I’m betting his accommodations would have been better.”

Like this post? Share it with the rest of the world. --->
« Tempted by Elisabeth Naughton
The Real Werewives of Vampire County by A Ivy, A Fox, J Haines & T Dane »