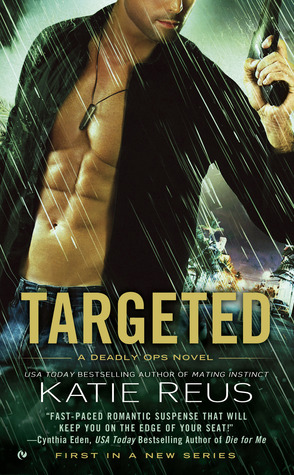 Former Marine sniper and current NSA agent Jack Stone has a new face to go with his new identity. But he still has the same tortured memories—which include the woman he let get away years ago, when they were teenagers. Now his new assignment in Miami will put him so close to the woman he’s never been able to forget, he could reach out and touch her—if only she weren’t under suspicion.

When Sophie Moreno uncovers evidence linking the medical supply company she works for with arms smuggling—and worse—she doesn’t know who to turn to. After a shocking betrayal, she realizes the only person she can trust is a mysterious new person in the company—a man with hauntingly familiar eyes.

As Sophie questions her intense attraction to this man and Jack struggles not to blow his cover, the two of them must race against the clock to stop terrorists from killing scores of people—starting with them.

Sam Kelly was tossed from foster home to foster home. The only person he ever cared about and who cared about him was Sophie. When Sam turned 18, he joined the marines but he had to leave Sophie behind until her 18th birthday. It only took that one month for all of Sam’s dreams to shatter. Sam wasn’t there the night that Sophie was attacked and brutalized. The young girl that she was blamed Sam for not being there to protect her when he promised to keep her safe. Sophie turned Sam out of her life.

When the NSA came to Sam and offered him a chance to leave the marines and join them, he jumped at the opportunity. The only thing he had to do was die. Sam Kelly would be no more. He needed to become someone else. Sam had no family, and the only person he ever loved kicked him out of her life. He welcomed the idea of becoming someone else.

As Jack Stone, he has taken on many dangerous and ugly jobs for the NSA. But he would do anything to walk away from this one. His boss wants him to go back to Miami to investigate to owner of South Beach Medical Supply. They believe SBMS is flying more than needed medical supplies to South America and they want to know if its drugs, guns or biological weapons. They want Jack to get close to the owner’s assistant, Sophie Moreno.

Being with Sophie again is painful. He needs her to trust him, but she acts as if she doesn’t know him. But, of course, she doesn’t know that the man behind the stranger’s face is the same man who would die to protect her.

Sophie can’t understand why looking into the eyes of a stranger has such a pull on her, or why being with him evokes thoughts of her long-lost love, Sam. But Sam is dead and she’ll never be able to tell him how sorry she was for taking out her anger on the only person she ever loved. Stranger of not, Sophie knows deep in her heart that she can trust Jack to keep her safe from the people who are trying to kill them.

THOUGHTS:
This was a great action, packed story from Katie Reus mixed with the interesting storyline of Sam’s reinvention as Jack Stone. When Sam is offered a chance to become someone else, to leave his past behind him for good, he jumps at the opportunity. He has no family and Sophie was the only person he ever loved. Without her, he has no problem killing off Sam Kelly.

But when he needs Sophie to trust him (now NSA agent Jack Stone), he hates that she fears he might hurt her. Sam/Jack knows that he would die for her, but Sophie only sees a stranger’s face.

I like that although Jack looks different, there are habits that are purely Sam that Sophie picks up throughout the story. Although Sophie thinks she is crazy to keep mixing up her memories of Sam with Jack, we know she is not far off the mark.

It added an interesting twist to what is already an exciting plot, and I would highly recommend giving this new series a try.

This scene was a memory of when they first met:

Sam sat against the tree in his backyard, embracing the feel of the rough bark scratching him through his shirt. Anything to erase the image of Sophie coming out of her bedroom earlier. She’d been wearing long pink pajama pants and a tank top. He’d see the outline of her nipples through it and hadn’t been able to stop staring. He scrubbed a hand over his face, then froze at the sound of soft footfalls moving over the grass behind him.

Swiveling, he glanced around the tree. Sophie gave him a tentative smile when she saw him and wrapped her arms around herself in that defensive way she often did. He didn’t want her to be like that with him.

“What are you doing out here?” she whispered as she sat directly next to him.

Holy shit, she was so close and smelled so good. Everything about her got him hard and he felt like a jerk because she looked at him with such innocent trust and gratitude. As if no one had ever been nice to her before except him. Swallowing hard, he lifted his arm and motioned for her to lean in.

Smiling, she scooted closer and laid her head on his shoulder as she tucked her body again his. He fought a groan. She was so compact, but with the right amount of curves. And she was soft and warm. God, what he wouldn’t give to–nope, not going there. He shifted uncomfortably, cursing his hard-on, and was thankful for the relative darkness of Ms. Bigsby’s backyard.

“I couldn’t sleep,” he finally whispered back. He wasn’t really sure why they were whispering in the first place, but decided to go with it.

He nodded, his chin brushing the top of her head. Her shampoo had a tropical scent to it, and it reminded him of the beach and coconuts. It was very quiet, especially for a Friday night. Normally someone in the neighborhood was having a party, so he savored the stillness. He didn’t have school or baseball practice tomorrow, which meant he could sleep in if Ms. Bigsby let them.

“Do you want to go to the beach tomorrow?” she finally asked after a few minutes of silence.

His entire body tightened. The beach. With Sophie. In a bathing suit. Being tortured by seeing her and not being able to touch, or stop the other guys from staring at her. He tried to find his voice but failed.

She pushed up and looked at him, her dark eyes guarded as she inched away from him. “You don’t have to if you don’t want to. It’s not like we have to be friends just because we live in the same house.”

He’d been living under the same roof as her for a week, and he sure as hell didn’t want just friendship. Clearly she’d misunderstood his silence.

“I want to!” he blurted, then felt stupid. “I was just thinking I don’t have a bathing suit.” Okay, that sounded lame, but she seemed to believe him.

Her shoulders relaxed a fraction as she leaned back against him. “you’re lucky because you’re a guy. You can just wear shorts. Or I’ve some some money saved up. I can buy you a suit at the boardwalk on the way.”

She was offering to buy him something? He tightened his grip around her shoulders as something foreign settled in his chest. He wasn’t sure what it was, but it made him feel warm. “Nah, I’ve got some cash saved too.”

He was always socking it away. Never knew when he’d get stuck in a shitty house and have to split. There was no way he’d let her pay for anything, but it amazed him that she’d offered in the first place.

“So…did I hear Inez stop by earlier?” There was more than a little hesitation in Sophie’s voice.

Sam snorted. “Yeah. Stupid cow.” He didn’t understand girls at all. He’d told Inez to leave Sophie alone and had been pretty mean to the neighbor girl. It wasn’t like he wanted to be mean, especially to a girl, but she tortured Sophie and that shit was gonna stop. So what did the crazy girl do? Inez came over wearing practically nothing and asked him if he wanted to “hand out” with her tonight. As in hook up. Fucking gross. The thought of touching Inez like that was enough to turn his stomach.

“You can hand out with her if you want. Just because she’s–“

“No.” He couldn’t even let Sophie finish that thought when he could hear the pain in her voice. He shifted their bodies so she had to look up at him. She stared at him with big eyes and he forgot to breath. What he would give to kiss her. Just once. He swallowed hard. “You think I’m that shallow?” He didn’t expand because he didn’t need to.

Smiling shyly, she shook her head and tucked it back against his shoulder. “I’m glad you don’t want to hand out with her,” she said after a few minutes of silence.

One response to “Targeted by Katie Reus”