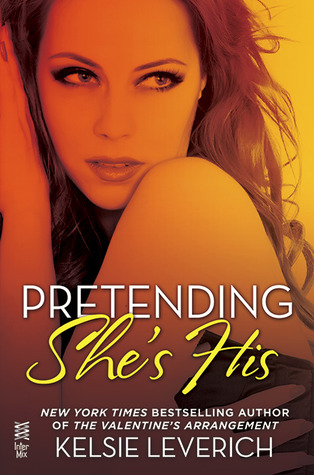 Eva Riley is the maid of honor at her best friend’s wedding and it just so happens that her ex is the best man. Eva’s a straight shooter and definitely not the damsel-in-distress type. But with her pride on the line and her ex’s heart on his sleeve, there might not be enough champagne in the world to get her through this weekend…

Trevor Owens may be one hell of a good friend to Eva, but he’s always wanted to get the fiery redhead between the sheets. So he swoops in and offers a solution to her ex problem: they can pretend to be together—just for the weekend. But when their little game of make-believe is over, will they be able to tell what’s real and what’s only pretend?

Being without a plus-one at her best friend Meagan’s wedding shouldn’t be a problem, but with such a small intimate reception, the only “available” men are Eva’s ex-lover Luke and Trevor. Normally, Eva wouldn’t have had a problem with a quick hook up with an old lover to pass the weekend, but Luke stormed out of the relationship after he declared his love and Eva…didn’t. Eva doesn’t consider herself so evil that she would play with a guy that had actual feelings for her. But when Luke tries to talk his way back into Eva’s life, “I’m with Trevor” just seemed to fly out of her mouth without any real thought.

Trevor has been one of Meagan’s best friends since they were teens, and in the four years Eva has known him, he has always been a great guy and a caring friend. He is also a womanizer and a flirt.  Then again, she’s no saint either.  But she was smart enough to shoot Trevor down from the first day.   Sleeping with friends just doesn’t work out well.

When Eva confesses to Trevor just what she told Luke, Trevor has no problem helping Eva out of a tight spot and playing the dedicated boyfriend, but somewhere along the weekend, they both stop playing pretend and for the first time for both of them, it just feels right.

Which one will risk heartache and a possible rejection first, or will they just walk away from something that just feels so perfect?

THOUGHTS:
We met Trevor and Eva in Feel the Rush and they both stood out as memorable characters. They are both flirty and fun and very protective of their friends but because they knew each other so well, including how flirty and non-committal they both were, they made sure never to cross the line of friendship.

What starts out as just a way to keep Eva’s ex-lover at a distance turns into a sexy romance when Eva realizes how wonderful it feels to be the object of Trevor’s tender touches.  I found myself caught up in his little kisses and touches as well.  Yowza!   Although Trevor admits to always being attracted to Eva, he too realizes how much he enjoys having her melt into him rather than her usual smart-mouthed ribbing.

I also enjoyed when Eva meets Trevor’s parents and sees that Trevor picked up his little touches of affection and sassy winks from watching his Dad with his Mom and realizes that it isn’t shallow flirtiness, but true affection he shows when he touches her.

You don’t need to have read the other books in the series to enjoy this one, and for $1.99 it’s a good buy for a sweet, sexy romance.  When you are done though, you probably will want to grab a copy of The Valentine’s Arrangement  or Feel the Rush.

Turning his head back toward her, he pulled his lips up in a knowing grin that had her wanting to wipe that grin off his face with the palm of her hand. “You’re not cold, are you?” he asked. The fucker knew she wasn’t cold.

“Kiss my ass, Trevor,” she sneered, which seemed to be the only retort she could come up with.

That wasn’t Eva. She was quick with the comebacks, smart with her mouth. But with unfamiliar thoughts floating around in the forefront of her mind, and with the warmth of Trevor’s kiss lingering on her skin, for once, she couldn’t come up with anything better. She was flustered.

“Do I really need to tell you bend over again, Red? I’ll gladly kiss that ass of yours anytime.”

She rolled her eyes. Not much else to do to smooth out that comment.

Raising an eyebrow, skeptically, she questioned, “Give them a show?”

“We’ve got an audience.”

Eva didn’t need to look to the side to know that everyone who was still sitting at that table was watching them. But before she could even respond to him, he kissed her.

Damn, did he kiss her…

His finger rested beneath her chin, lifting it slightly so her head was angled toward his. His lips brushed over hers, and then lingered there—barely touching. It was agonizing. She wanted so bad to crush her lips to his—hard. She wanted so bad to lift her hands to the back of his neck and pull him to her so she could feel the full weight of his lips on hers. But she didn’t.

His hand dropped from hers, leaving it still resting on his chest, and he placed it on the middle of her back. Although is mouth was gentle, soft and light, his hands were firm, hard and eager. She liked feeling that from him. And she hated that she liked it.

She melted against him and his arms held her tightly. She thought she felt a small tug to the corners of his lips as if he was smiling, but she couldn’t be sure. She was a sopping puddle. She was a swooning, sappy, gushy mess at the moment. And none of those things were Eva.

She didn’t melt, she didn’t swoon, or gush. But apparently she did now.

His tongue never entered her mouth as he moved his lips over hers.

Damn, this man knew what the hell he was doing. She wanted to slip her tongue inside and taste him, she wanted to felt he warmth of his mouth coat hers, she wanted to deepen this little teasing kiss and expand the flutter that had formed in her stomach.

Just as she was about to break her own rule, he pulled away. Moving his mouth to the side of her neck, he kissed her beneath her ear. This time she felt his tongue. It snaked out and sampled a small patch of her skin, just barely and all to quickly. Then he moved to her ear and whispered, “See, I told you it wouldn’t be so bad pretending to be mine.”

If she wasn’t still reeling and lightheaded from the most PG-rated kiss she had ever had, she would tell him to fuck off. She hated that he knew the effect he just had on her. Eva was a proud woman, and Trevor was a cocky ass. He could think whatever the hell he wanted to think. There was no way she would admit what that kiss did to her.