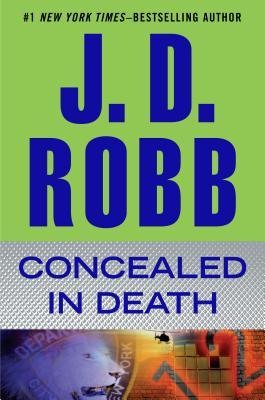 I’m giving away my uncorrected proof copy of Concealed in Death. Tell us one of your favorite stories in the In Death series.

ORDER A COPY: Concealed in Death

In a decrepit, long-empty New York building, Lieutenant Eve Dallas’s husband begins the demolition process by swinging a sledgehammer into a wall. When the dust clears, there are two skeletons wrapped in plastic behind it. He summons his wife immediately—and by the time she’s done with the crime scene, there are twelve murders to be solved.

The place once housed a makeshift shelter for troubled teenagers, back in the mid-2040s, and Eve tracks down the people who ran it. Between their recollections and the work of the force’s new forensic anthropologist, Eve begins to put names and faces to the remains. They are all young girls. A tattooed tough girl who dealt in illegal drugs. The runaway daughter of a pair of well-to-do doctors. They all had their stories. And they all lost their chance for a better life.

Then Eve discovers a connection between the victims and someone she knows. And she grows even more determined to reveal the secrets of the place that was called The Sanctuary—and the evil concealed in one human heart.

Lt. Eve Dallas and her husband, Roarke, are once again drawn into a case which brushes too close to their own tortured childhood.

Roarke has purchased a rundown building which he is planning on gutting and creating a new safe haven. Like Duchas, his shelter for women, this place would be for kids who have been forced into the system and are in need a safe place away from the people who are supposed to care for them; just like he and Eve once were.

While taking down a wall, he finds bodies wrapped neatly in plastic, or more particularly the bones of young girls. Roarke calls in his wife to investigate what happened to them. It doesn’t take much searching to determine that the last use the property had was fifteen years ago as another shelter for troubled and runaway kids.

Eve has to follow a cold trail back to a killer but first she needs to put faces to these young girls.  Dr. Garnet DeWinter is brought in as a forensic anthropologist to work with Dr. Morris, the M.E., to determine who they were and what killed them.

When the lives of these girls brushes too close to home, Eve realizes that the difference between herself and these young girls is simply dumb luck. While Eve and Roarke grew up and made their own way out of the gutter of their own childhood, someone took away the chance for these girls. There is no statute of limitations on murder and Eve is determine to find their killer.

THOUGHTS:
Although this is not one of the most thrilling stories in the series, it was another interesting investigation for Eve Dallas. There was more time spent determining who these girls were, talking to their families and putting together the whys and wherefores of what happened 15 years ago, than there was chasing down the killer.  The investigation was mostly handled by Eve and Peabody, so there was little interaction with the rest of the team.

There were some sweet moments between Eve and Roarke, but again nothing absolutely exciting. Move of a settling into married life.

Any fan of the series will, of course, read this story and enjoy the investigation, but if I was trying to intrigue someone into giving the series a try, there are much more exciting stories that I would suggest.

I will say for a happily married woman, Eve does not like when some woman gets to close to Dr. Morris. Interesting.

Received an ARC from the publisher in exchange for an honest opinion.

Then she picked up her coffee, put her boots up, and let her mind clear.

Because it was clear, the first thing that popped in when Roarke stepped inside was: He’s so pretty.

“You couldn’t have been more right or more succinct about the traffic. It was bloody vicious.”

“You’re right. That calls for a drink.”

He came over to her first put his hands on the arms of her chair, leaned down to kiss her.

She surprised him, undid him, by rising up, wrapping her arms tight around him, and making it much more than a welcome home kiss.

“Well now, I might arrange for bloody vicious traffic daily.”

“I don’t know.” She’d surprised herself as much as him. “I guess…The Miras this morning, then this couple later. It…” Her mind, she realized, wasn’t as clear as she’d thought. “I’ll have that drink, and tell you.”

“All right. Let’s have it downstairs. You can come up with Mira if you feel you must,” he added, anticipating her protest, “but we should go down, greet them first, as friends.”

“You’re right.” She wrapped around him again, just to hold. “We’ll go downstairs.”

He tipped her head back, looked into her eyes. “You’re not sad.”

Thoughtful then, he decided, taking her hand as they went back down.

Summerset had lit the fire, and the tree. The parlor looked, well, amazing, she thought. It looked like home—her home— despite its elegance, its exceptional taste and style, the gleam of antiques, the art, the color, the lovely blending of old and new.

She shook her head, sat on the arm of a chair because you could do that at home.

“I was in the Miras’ house this morning, and thinking how pretty it is there, how calm and pretty and easy to be in. This is, too. Isn’t that funny that this is, too? They have a tree. We have a tree. Well, I don’t know how many trees we have in here because who could count?”

“Okay. We have twenty trees.” It struck her suddenly. Twenty trees. “Seriously?”

“Yes.” He smiled, as much at his own need to fill the house with Christmas as with her reaction. “We’ll go around and have a look at all of them sometime.”

“It’ll take a while. Anyway, they had a fire, and we have one. But it’s not that, do you know what I mean? It’s the feeling. I used to envy that feeling. I could recognize it. You’d go into somebody’s place to interview the, notify them, even arrest them, and you’d recognize the feeling of home when it was there.”

“I know that envy, very well.” Which, he understood, explained all the trees, among other things.

“I thought when I moved in here it would always be a house, and always be yours. I don’t even know when that changed, not exactly, and it became mine. Ours. That’s pretty amazing.”

“It was a house, one I enjoyed very much. But it wasn’t a home until you.” He looked around the parlor as she had. Candles and firelight, tree glowing, colors rich, wood gleaming.

“What I put in it was for comfort, for show, or because I could. It mattered to have it, this place. My place. But I could never quite reach that feeling, until you.”

“I get that,” she realized. “It matters that you mean it, and that I get it.” She took a breath while he opened a bottle of wine. “You know how they are, the Miras. So connected, so just right. I swear if I didn’t love you, if it wasn’t for her, I’d really go for him.”

At Roarke’s laugh, she shook her head again, took the wine he offered.

“I think I could take him,” Roarke considered.

“I don’t know. He might surprise you. Anyway, it’s not like that really. There’s just…he’s just…There’s something about him that hits all my soft spots. I didn’t know I had some of them.”

“He brought me those silly gloves and that stupid hat, and put them on me like I was a kid. I ended up wearing them because he can’t button his sweater right half the time but he hunted up a cap and gloves for me because it’s cold out. He’s so kind, and they have this amazing connection between them.”

She had to take a steadying breath, amazed at how sloppy she felt about…all of it.

“I want that. I mean when we’ve been together like them a couple decades, I want that with us.”

“Darling Eve.” This time he pressed his lips to the top of her head. “There’s more every day.”

“It feels like it. Sometimes I don’t know how I got through not feeling it. And later, this couple. I need to talk to Mira about her. DeLonna.”

“Ah.” He sat now. “Sebastian came through. I thought he must have when you didn’t ask me to dig him up.”

“She goes by Lonna, Sebastian neglected to tell me he’d helped her change her name off the books. Lonna Moon. She and her guy own this swank little club. The Purple Moon.”

“You don’t own the building, do you?”

“I don’t, but I’ve heard of the club. It has a good rep.” His hand glided gently along her thigh. Affection. Connection. “We should go there.”

“We should. Yeah, we should. I’ll get into the whole thing, but what I wanted to say to you was listening to her, seeing them together, it struck close to home. She’s solid, no washout, but he worries about her because of what she went through. She has nightmares.”

Those eyes, those wild blue eyes met hers. He didn’t have to say a thing to say everything.

“Looking at them, seeing them, I could see some of us. And it was really good, what I saw. I don’t know his story, but there’s something there. Slick, he’s slick, and looks like he can and has handled himself. But they were connected.”

“So.” She let out another breath. “I want to let you know if the day comes when you forget how to button your sweater—when you start wearing those button-sweater deals—I’ll fix it.”

“Every day there’s more,” he murmured. Swamped with love, he drew her off the arm of the chair into his lap.

Like this post? Share it with the rest of the world. --->
« Blood from a Silver Cross by E.S. Moore
Audiobook Review: Iron Kissed by Patricia Briggs »

One response to “Concealed in Death by J.D. Robb”