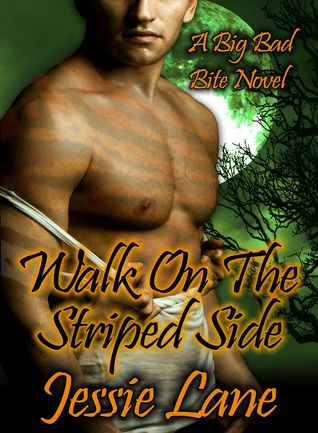 ORDER A COPY: Walk On The Striped Side (Big Bad Bite Series)

Does he have his claws in her for good? Or is she just yanking his tail?

Elena Demos’s life has been turned upside down. Her mother has passed away, leaving Elena and her two half-sisters to deal with their mother’s will and the crazy stipulations it contains. For the three sisters to inherit the substantial amount of money left behind, they have to go to work with two aunts they’ve never met, in the family business they’ve known nothing about, Amazons Inc. If that isn’t bad enough, she runs into the man who once broke her heart, and it’s only their first day on the job.

Gage Ivanov is a stupid beast. He let the woman who should be his mate go because she couldn’t be told of his Other identity. Now, Elena’s back, but she refuses to give in to his demands for her to be his mate. The timing for all of this couldn’t be worse, either, because Gage and his circle of friends are trying to subdue a rogue pack of wolf shifters in Germany who threaten to out the Others to the world of humans. Will he be able to juggle the oncoming conflict and win back his mate?

When Gage first met Elena she was an MP and more than willing to go toe-to-toe with him, a superior officer. A Siberian Tiger shifter like Gage isn’t used to meeting many females who would challenge him. She might have his tiger intrigued, but as a possible mate, he knew her frail humanity was something he didn’t want to get involved with long-term. So after a brief but very satisfying affair, Gage pushed Elena away–hard.

Two years later, the heartbroken Elena is back in his life and this time, Gage isn’t going to let her walk away. All he has to do is get her to forgive him. That might not be such an easy task, but that’s okay, because Tigers are patient hunters, and he’ll do whatever he needs for as long as he needs.

Elena is shocked to find out about the supernatural community that lives among humans, especially after learning she took one to bed for six months. More surprising is the fact that she and her sisters are descended from actual Amazons. When their mother died, they took over her position in the family bounty hunter business.

Revenge is sweet and one of their first assignments is to bring Gage’s beloved sister to the Demon Council to face charges for murder. Elena doesn’t care whether Lulu is guilty or innocent, she just knows bringing her in will torture Gage. She’ll show him that she doesn’t care about how he tossed her away, if only her heart and body would listen to her brain.

THOUGHTS:
The Siberian Tigers were the stand out characters of Book #1 in the Big Bad Bite series so it was a great idea to focus the second book on brother, Gage.  Elena and Gage were both strong-willed characters and they worked well together. I loved how Gage hand-cuffed Elena to him to force her to deal with him.

There is a definite improvement in this writing team since Book #1. The characters didn’t flounder this time and there was a nice blend of the romance with the continuing storyline of the shifter problem in Europe and the new storyline involving Gage’s sister which will continue into the next story. Their last book seemed to be working desperately to come off as erotic and it simple came off as being desperate. In this book, the natural spark between Elena and Gage caught fire all on its own. Elena was more warrior than princess and she was never forced into high heel and bustiers. Gage saw her bravery as its own aphrodisiac and knew how to dominate her without forcing her to be submissive.

And the “stalker spider” was hilarious, proving that no matter how badass a woman can be, spiders can still freak us out.

The next book is Jenna’s partner, Kent, who was another great character and Elena’s sister Chloe, who is the princess of the family. I am looking forward to a story about Gage’s brother, Alec. I can’t wait to see the woman who will bring him to his knees.

I would highly recommend this story to anyone who likes a good paranormal story.

Received a review copy courtesy of the authors in exchange for an honest review.

He knew something was wrong the second he got out of his truck. With his sharper Other senses Gage could see the drag marks through the gravel of his driveway where something heavy had been pulled from his house. Whatever had transpired had to have happened earlier in the day though because he couldn’t scent anything strange in the air around him. Jogging up to his home’s front door he heard his brother’s truck pull up and park behind him. As soon as he opened the door the unique smell of his mate filled the air, along with the scents of her sisters.

If circumstances were different, coming home to Elena’s scent would be one of the best experiences of his life. The fact that he was also smelling an unusually dusty, clay type smell that didn’t belong here probably meant that this was not going to be something that made him happy.

“Babushka?” He called out as he stepped into his home. A gravelly crunch sounded under his foot. He looked on at the floor, but even with his enhanced eye sight all he could made out were tiny rocks. Why were there rocks in his house? If this was his grandmother’s idea of turning his house into one giant ass Zen rock garden he was going to be pissed. As Gage walked over to the wall to turn the light on, he heard Alec walk in behind him.

“Yo bro, what the fuck do you have on your floor?”

Good question, Gage thought to himself right before he flicked the light switch on. Of course, the minute the lights came on he wanted nothing more than to shut them back off again.

“It that–?” His brother started to ask.

“Shut the fuck up!” Gage growled.

Alec’s boom of laughter echoed through the house as he closed his eyes in anger. Trying to pretend that he wasn’t looking at a very obvious message from his angry, devious mate. Oh, when he got his hands on her he was going to strip her naked, throw her on his bed and paddle her ass for this! A soft, plush object collided with his head before he heard it hit the floor at his feet. Opening his eyes and looking down he saw a small stuffed mouse that he could smell was full of catnip. It was a goddamn cat toy. That his brother had thrown at his head.

Snarling, he lost his temper and roared at his brother. The bastard seemed to care less that he’d pissed Gage off because he was now laughing so hard that he was bent over with his hands resting on his knees, gasping for air. Gage did his best to ignore the idiot as he looked around his home. Cat litter covered his hard wood floors everywhere that he could see. Since the litter was even covering the floor in the hallway, he suspected he would find it in the bedrooms and bathrooms as well. His Elena hadn’t stopped there though. There were cat toys all over. Little stuffed mice like the one Alec had thrown at him. Sparkly little balls. A brightly colored pop-up tunnel for house cats to play in. A scratching post over by the French doors on the other side of the room. When he saw the motorized mouse scurry across the floor he almost flipped his shit. There had to be dozens of ridiculous cat toys spread throughout his house.

Walking across the litter covered floor he saw the little yellow piece of paper taped to one of the support columns. He snatched the note and instantly recognized Elena’s messy scrawl.

Don’t forget to scoop your litter after you take a shit.

P.S. I have your grandmother and sister with me. Don’t worry, you’re the only one I want to make a tiger skin rug out of.

Strangely, Gage wasn’t worried about Babushka’s safety. Because he believed Elena when she said that he was the only one she wanted to make a rug out of. He was worried that Elena would do something stupid though, like turn his sister over to the demon’s Ninth Circle Council. Lulu might be guilty of being a twit for getting involved with a mated demon, but she wasn’t a murderer. Gage knew that about his sister. She didn’t have it in her to murder the demon. Or anybody for that matter. She was a lover, not a fighter.

Crumpling the little note in his hand, he stood perfectly still trying to regain his composure. His tiger was going ape-shit in his head. The beast wasn’t mad at what their mate had done. No, the beast was angry because the scent of their mate was finally in their den, but she wasn’t here to stay.  And the tiger blamed him. There was nothing he could say to the animal half of himself because the beast was right. This situation was all his fault.

The tip of his ear suddenly tingled and he ran his hand over it to rub the odd feeling away. The tingly sensation happened again at the back of his neck and as Gage swiped his hand over the area the hairs on the back of his neck stood on end because someone was standing behind him. Turning around he found Alec standing there holding a wand with feather on the end of it.

“Hey, can we keep all the toys for your future cubs with the Amazon?”

Like this post? Share it with the rest of the world. --->
« Review: To Catch a Vampire by Jennifer Harlow
Audiobook Review: Silver Borne by Patricia Briggs »

One response to “Walk on the Striped Side by Jessie Lane”