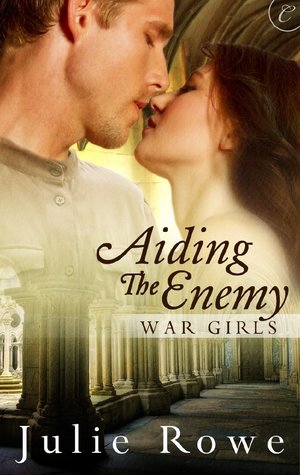 Rose Culver is in grave danger. For months the Red Cross head nurse has been aiding Allied soldiers caught behind enemy lines, helping them flee into neutral Netherlands. It’s only a matter of time until she’s caught. Which makes it the wrong time to fall in love with a handsome German military doctor as devoted to the sanctity of human life as she is.

The Great War has caused Dr. Herman Geoff to question everything he once believed. He knows Rose has been hiding British soldiers in her hospital—he’s even treated some of them, refusing to go against his own Hippocratic oath. As a doctor, he admires Rose’s skill and conviction. As a man, he can no longer deny his attraction to her. But when Rose is arrested for treason, Herman must choose between love for her and duty to his country.

Rose Culver and Dr. Herman Geoff are working themselves to the bone trying to help the soldiers that come through their doors. There is little supplies and even less food to feed themselves and their patients, but they won’t abandon the patients that they can treat.

Rose was working in Belgium when the war broke out and she couldn’t abandon her student nurses and flee back to England to save herself. To Rose, there is no us or them. There is no enemy. There is only sick and dying that need her help. When they enter the hospital, their clothes are removed and with no uniform to distinguish them, they are only patients who need her care.

But the Germans don’t subscribe to the same philosophy as Rose. They believe she is helping wounded British soldiers get out of the country and they are watching her.

Dr. Geoff is also watching Rose, but not for the same reason as the army. Herman has never known anyone as giving and as dedicated as Rose. He worries that she isn’t eating or sleeping enough, and he worries that someone besides himself will notice the men she is helping–the enemy soldiers. He wants to protect her from the dangers that she faces. Her actions would be considered treason. He also knows that to ask her to stop would be to ask her to stop being the caring person she is down to her wonderful soul.

Interesting enough this took place during WWI. Most war stories seem to take place in WWII. It was also very interesting to read the descriptions of the medical care which soldiers received although there wasn’t much change since the civil war. It was pretty much diagnosis through smell. They smelled the patient to determine infection and then they pretty much cut off limbs or sections of dead flesh. Penicillin anyone? One orderly was surprised about the new orders to wear clean clothes and wash every day, and the instruments was soaked in alcohol to clean them. Not rubbing alcohol…brandy. Modern medicine is a wonderful thing.

Although the medical aspect were interesting and quite scary, the characters of Rose and Herman were kind of bland. They were laid back and there was no tension, sexual or otherwise. There was moments where it could have gotten more interesting like when Herman was mad that Rose kept calling him Sir instead of Herman, and he threatened he would turn her over his knee if she didn’t stop, or when Rose tried to sneak away from Herman before he could get in trouble for helping her, making him angry at her. At least I think he was angry. He was pretty mild for being furious.

Rose does get arrested at one point and they simply keep her in a cell, take her out for questions which she vaguely answers, and then they put her back in the cell. Day after day. Apparently, pre-Nazi Germany had a kinder, gentler interrogation practice.

It was an interesting story, but for a story set in the middle of the war, it was kind of boring.

She managed to get some sleep in the large, overstuffed chair in her office, but rose early to write treatment notes on the patients in the hospital. Dr. Geoff was quite adamant about writing things down. Wanting a record to show the military how much work was done and to justify personnel. Rose agreed with his logic, but not everyone reviewed the results of war logically.

Many of the officers she’d met were solely focused on the destruction of lives, not their reconstruction. A noise attracted her attention. Dr. Geoff stood in her doorway, weaving slightly.

“Sit. Sit.” He waved his hand at her like a piece of paper flying about in a stiff wind.

She sat, frowning. Her gut churned a warning. Something wasn’t right.

“I need to sa–say something to you.” He said as he lurched into the room and shut the door behind him. He smiled somewhat lopsided. “I’ve been meaning to say it from some time.”

“God, I hope so. I really, really do.” He stumbled to her desk. Then braced his hands on its surface. They were quite possibly the only things holding him up.

“What is it you wanted to tell me?”

She came around the desk and slipped one shoulder under his and her arm around his back. The heat of a blush crept up her neck and face. How often had she dreamed of being in his arms?

“What are you doing?” He sounded genuinely curious. He was so close, yet he’d never been so far away.

“Helping you to your chair over there.” She nodded at the large chair she’d napped in earlier. She’d found it reasonably comfortable but Dr. Geoff was much taller and broader at the shoulders than she was. They staggered toward the chair weaving one way and then another. His right knee gave out and he nearly took her with him to the floor. She squeaked, held on, then all but dumped him into the chair.

“But it’s inevitable. You’re going to get hurt.”

She watched with amazement as a tear tracked its way down his face.

“Rodney got hurt.” He laughed, but it was sad rather than happy. “Hurt in a way I’ll never be able to fix.

“We can’t fix everything, Sir.”

He patted her cheek. His hand lingering, caressing her skin. “So soft.”

That hand slipped behind her head and pulled her down. Her breath caught as his lips met hers in a kiss that shocked her. It lasted two full seconds. Two seconds of surprise, then curiosity, then the beginnings of pleasure.

He’d released her as fast as he grabbed her. His gaze focused on her face.

“They’re determined to catch you, Rose.” He poked her shoulder with his index finger. “They know what you’re doing. What you did. They know. Do you understand me?”