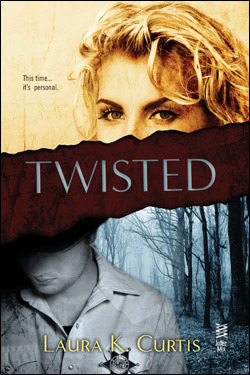 Lucy Sadler Caldwell is a successful true-crime writer. But the one story she’s never been able to come to terms with is the murder of her own mother–until now. She’s returned to Dobbs Hollow, Texas, the hometown she fled seventeen years ago, to finally expose the real killer.

After a bullet took out his knee in Houston, Detective Ethan Donovan found himself without a lot of options, which is how he ended up as Chief of Police in Dobbs Hollow. Lucy sure isn’t asking for his help–she’s not big on trust–but he can’t help feeling a strong desire to come to her aid.

And though Lucy is armed to the teeth, she will need all the help she can get. When she starts digging into the past, she unearths a psychotic killer who will stop at nothing to silence her forever.

Lucy Caldwell has written several books about true crimes. She has learned much over the years from working with the police and the FBI. Now it is time for her to write the most important story of all. The one about her own mother’s murder seventeen years ago. To do this, she is going to have to go back to the small town of Dobbs Hollow, Texas. The same Town where she grabbed her little brother and ran from after walking into the grizzly discovery in her living room.

No one wept for the death of the small town’s local prostitute, and no one broke a sweat investigating her death. Lucy is going to use all the investigation skills that she learned to try to find her mother’s killer. Her mother might not have been a good woman in the eyes of the Town’s people, but she tried to give Lucy and her brother a good life and tried to keep that part of her life away from her children. But since everyone in small towns knows everyone else’s business, the kids in school made sure Lucy knew what they thought of the daughter of the local whole. She doesn’t know what will be harder, looking through her mother’s murder file or facing the locals who still look at her with hatred in their eyes.

What she doesn’t count on in the cooperation of the new Chief of Police, Ethan Donovan. Ethan isn’t local. He was from Houston PD until he was let go on disability. Lucy doesn’t know if she can trust him or why the all powerful Mayor Dobbs would appoint an outsider to the position unless he had some control over Ethan.  Can she trust him or is he is a pawn of the Mayor?

While Lucy and Ethan work together to solve an almost twenty-year old murder, they start to notice a pattern of more recent raped and missing women in the outlying counties and when bodies start showing up, they have to try and figure out if Cecile’s murder and the missing women are connected and why.

But someone isn’t going to wait for Lucy to figure this out and if they can’t scare her away before she does, it just might be time to take Lucy out of the equation forever.

THOUGHTS:
There was a lot going on in this thriller so there was plenty of action and killing, and it was quite twisted, but there was so much going on that the ending was pretty complex for a small town.

I was left a little confused about why Lucy herself was so hated and why so many people were so desperate to get Lucy out of town.  I understand why her mother’s killer wants her gone, but why were so many others so focused on her? Maybe it is small town life, but most of the town seemed to judge Lucy on what her mother did. There was a reference to how many boys in high school used Lucy as leverage to get their girlfriends into bed, in a “I can go to the daughter of the local whore for sex if you don’t give it up” threat, but Lucy wasn’t portrayed as acting like someone with loose morals.  She wasn’t overly flirty or dressed provocatively. She seemed like the type to keep to herself.  So why would everyone assume she too was fast and loose?

As far as the romance aspect, you watched Ethan and Lucy work together and build trust and finally confess all their hidden secrets, but all-in-all the romance wasn’t built up enough to make it a really passionate love affair.

As far as a thriller it certainly kept me guessing and I certainly didn’t catch the killer before they did, but in the end there was just too much going on and too many bad guys for one small town.

“Hey, boss,” she said when he picked up. “I’m parked outside the Sadler place. I stopped by to bring them muffins this morning. Thing is, someone beat me here.”

Ethan paused, unable to speak as he pulled his T-shirt over his head. “What happened?”

“A couple hours ago, someone tossed a couple bricks through the front window, wrapped in paper with explicit instructions to get out of town.”

“Yeah. Pissed off, but not hurt. According to Lucy, she swept up the glass, reboarded the window and went back to bed.”

“Why the hell didn’t they call it in?”

TJ’s silence answered for her, and he blew out a deep breath to ease his frustration. Okay, so Lucy’s distrust of the Dobbs Hollow residents included him. He’d led plenty of investigations where suspects, witnesses and even victims didn’t trust him. “Fine. Ill be there in a couple minutes.”

Ethan elected to forgo the lights and siren, not wanting to draw attention, but he drove as if using them, ignoring most of the stops signs, as he was alone on the road.

When he skidded to a stop, he saw Lucy–standing on the porch with TJ, surveying the damage–jump. TJ put her arm over her friend’s shoulders, and Lucy relaxed a bit.

Ethan, on the other hand, found every muscle in his body frozen into place. He’d seen Lucy in a business suit, and he’d seen her in shorts, but this morning she appeared to be wearing nothing but an oversized Cowboys football jersey. Her hair fell about her shoulders in a golden tangle, shimmering in the morning sun. Christ on a crutch. How as he supposed to concentrate on a crime scene with her looking like she’d just crawled out of bed? Which, come to think of it, she probably had. He hadn’t had such an immediate physical reaction to the sight of a woman since…well…since Betty Ramsey had invited him into her room while her parents were away when they were in high school.

Just then, Lucy noticed his gaze. She glanced down, and a hot blush swept up from her ankles all the way up to her face. In a flash, she disappeared inside the house, freeing Ethan to climb from his car.

The front window, from which Lucy and Tim had removed the plywood only the day before, was once again boarded up. In addition, two red paint bombs had been tossed at the house, exploding against the wall and dripping down the white siding like blood. Lucy couldn’t have missed the similarity.

Ethan walked over to check out the source of the paint, expecting paintball shells or balloons. Instead, two broken condoms rested below the red streaks. Lucy couldn’t have missed that either.

“I’m sure it was just kids,” she said, coming back out to the porch. She’d donned jeans along with a T-shirt, and pulled her thick, honey-colored hair up into a high ponytail. Her feet were still bare, however, her toenails polished a pale pink.

Ethan dragged his gaze form the fascinating glimpse of feminine softness provided by those touches of pink back up to her face. “No, ma’am, I don’t think so. Kids, they might TP you house, or spray random slogans, or even go for the shock value of an inverted pentagram or two, but he kids around here don’t know you. They’ve got no reason to bust out your windows and sent notes telling you to go home.”