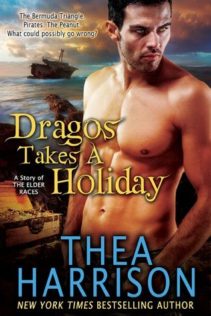 The Bermuda Triangle. Pirates. The Peanut. What could possibly go wrong?

Dragos Cuelebre needs a vacation. So does Pia, his mate. When the First Family of the Wyr head to Bermuda for some much needed R&R, it’s no ordinary undertaking – and no ordinary weekend in the sun. Between hunting for ancient treasure buried beneath the waves and keeping track of their son, Liam—a.k.a. Peanut, whose Wyr abilities are manifesting far ahead of schedule—it’s a miracle that Pia and Dragos can get any time together.

They’re determined to make the most of each moment, no matter who tries to get in their way.

And did we mention pirates?

For Dragos Cuelebre, this has been one of the greatest, but craziest years in his millenia of existence. He was met and mated Pia, he lost two of his friends and sentinels to their own matings, he saved the Elven domain, he held the first Sentinel Games, and his mate gave him the greatest treasure that he has even had—his son, Liam. After a year like this, the Cuelebre family are in need of a quiet vacation.

At least that is what Pia is trying to convince Dragos to do with some subtle hints. She even gets out some books from the library on lost treasures knowing full well that an acquisitive dragon like Dragos won’t be able to resist a treasure hunting adventure and a family vacation in the Caribbean is just what Pia needs.

But you can’t expect a treasure hunt with the Lord of the Wyrs to be without complications. Especially since there are several parties already looking for the lost treasure of the Light Fae.

It doesn’t take long for a Wyr as powerful as Dragos to locate the treasure especially when it contains magical items and since the pirates can’t take the treasure from him, they take something much more valuable than gold—his newborn son.

THOUGHTS:
Peanut is now my favorite character of all time! I absolutely love him! We have this story told not only from Pia and Drago’s POV, but we also have several chapters told by their son, Liam, affectionately known as Peanut. He is absolutely adorable!! He even won over the harpy, Aryal, in Kinked, he’s that cute.

I loved that Thea went back to Dragos and Pia in Lord’s Fall and we were able to once again enjoy time with them and their new son. It was an interesting and lighthearted novella. We have become complacent with Dragos. He is a devoted husband and now father. But this story shows just what happens when you cross someone as powerful and deadly as a Wyr-dragon. He isn’t Lord of the Wyr for nothing.

And did I mention how cute Peanut is??

Mommy carried him into his room. He thought things were going quite well until she set him down on the thick, soft rug in the middle of the floor.

He was tired again, and his mouth hurt, and he was hungry all of the time. Hungry for what, he didn’t know. Hungry, hungry.

So he scowled and concentrated mightily on something that he wanted.

And the world shifted.

He felt better. Quite a bit better, actually. His new mouth didn’t hurt at all, but he was still very hungry.

Mommy kept talking as she moved around his room. She pulled diapers out of drawers, set them on the changing table and turned to the closet. “…I want to take you to the beach and play in the sand with you, except I don’t know that we should. Are you too young to play in sand, or to go into salt water? Peanut, you are such a statistical outlier, half the time I have no idea what we should do with you.”

She turned away from the closet, her arms full of clothes. When she looked at him, she shrieked and dropped everything.

It startled him so badly he felt a burst of anxiety. He turned around to scoot backward toward her as fast as he could, but something flopped along his back, and his arms and legs weren’t working quite the way they had been earlier. He stopped, confused, and looked down at himself.

Slender white forelegs stretched to the floor. He picked up a front paw, staring at the talons. Then he looked over his shoulder and flexed sleek, graceful wings. A tail trailed the floor behind him. He reached for it with one forepaw and picked up the end. When he tugged at it, his butt wagged. The tail was attached to him.

Mommy knelt in front of him and cupped his face. He looked up into her eyes. She was teary and yet smiling. “You are the cleverest baby ever,” she said. “You’re so beautiful, and exactly how I first dreamed of you.”

Pleasure sleeked him down, and he smiled at her.

Her eyes went very round. Then she beamed at him. “That’s quite a mouthful of toofers you’ve got there, too.”

She gathered him up in her arms. He tucked his snout into the crook of her neck, and it was so good. It was almost everything he wanted, except….

He was so hungry.

He fussed and whined, and she sat on the floor and rocked him, while she dug her cell phone out of her pocket and moved her thumb rapidly over the keypad. “Dragos, you have to come home right now.”

“Nothing’s wrong exactly, but Liam has changed and he’s upset.”

“I mean he’s changed! He’s in his dragon form, and I can’t even tell you how beautiful he is. He’s also upset for some reason. Maybe it scared him? And you’re missing all of it. You need to come see this.”

Mommy set the phone aside as Liam whined and plucked at her shirt. “Are you hungry?” she asked gently. He nodded. “I can’t nurse you when you’re like this, sweetheart, not with all of those razor sharp teeth.”

That was the saddest thing he had ever heard in his whole life. He lifted his head and looked at her, grief bleeding from his eyes.

“Oh Peanut, I’m so sorry. Please don’t look at me that way.” They considered each other desperately. Mommy’s expression turned firm. He folded his wings back and clung to her, as she rolled to her feet and carried him to the kitchen.

She opened the fridge door and pulled out a pan that had the something he was craving. It smelled oh, so good. He arched toward the pan, reaching with both front paws.

“Hold on—let me get the plastic wrap off first.”

She slid to the floor as he struggled to get to the contents in the pan. She snatched off the plastic wrap, set the pan on the kitchen tile, and he fell on the leftover sirloin roast. Eyes closed, his whole body tense, he focused on gorging on the meat.

Running footsteps sounded in the background, but it was only Daddy, so he ignored it. A moment later, Daddy said in a quiet voice, “Well, damn. Look at that. Hello, little man.”

A large, gentle hand came down on Liam’s back, between his wings, and contentment filled him.

“I didn’t know what else to do,” Pia said. “He acted like he was starving, and he has all those teeth. Then I remembered what you said about how he was going to need a lot of meat.”

“You did exactly what you should have,” said Daddy.

Liam finished off the roast. The hungriness had gone away, and his belly felt comfortably stretched and full. Sleepiness descended. Eyes drooping, he looked over his shoulder. Daddy and Mommy knelt on either side of him, both smiling.

He scooted backward toward Mommy. When she gathered him up, he turned to climb up her body until he lay draped along her shoulders.

“I’m telling you, this is just like my dreams,” Mommy said. She reached up to stroke his leg. He stopped listening to their conversation, tucked his snout in the neckline of her shirt and fell fast asleep. 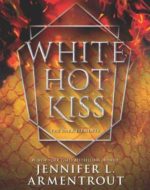 One response to “Review: Dragos Takes a Holiday by Thea Harrison”