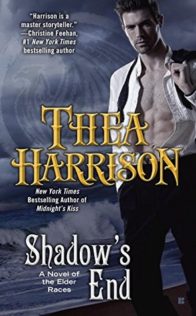 [box style=”rounded” border=”full”]We have been waiting from time for Graydon’s story but I was disappointed in the romance between him and Bel. Take note that When you grab your friends and go to war with a Djinn, there is not going to be a completely happy ending. The most important part of this story is the juxtaposition between Calondir/Ferion’s relationship and Drago/Liam’s relationship. [/box]

This story begins 200 years ago. Beluviel, wife of the High Elven Lord, is looking for her stepson, Ferion, at the winter masque. Ferion has been indulging in self-destructive behavior and his gambling is getting more and more out of control. It looks like instead of showing for the party as he promised, he has gone to the pleasure place owned by the notorious pariah Djinn, Malphas.

Graydon has kept his interest in Bel to himself. He knows no good can come from the fact that he has long desired the wife of the Elven Lord. But when he sees Bel’s distress at the masque and finds out her intention to go to Malfeasance, he insists on accompanying her. Once there they find out that Malphas had invited Ferion to a private game at his home in the countryside. It is many hours travel and there is no way Bel would be able to return before her husband was aware that she and Ferion were missing. Thankfully, she has a griffin offering to fly her and protect her when she confronts the dangerous Djinn.

It is no secret that the marriage between Bel and Calondir is a failure. Bel is lonely and it doesn’t take her long to see all the good points in Graydon that her husband doesn’t possess. When the make camp just outside of the town to regain their strength before they confront Malphas, Graydon and Bel give in to their mutual desires. Of course, who comes along to catch them but Malphas. He invites them to his home so they can discuss see Ferion and discuss mutual secrets.

Ferion has gotten so deep in debt with Malphas, that Malphas has put a lien on Feroin’s soul. He can control Ferion’s very thoughts and actions. Malphas has long desired an in with someone high in a demesne and the heir to the Elven court is perfect. Malphas has no desire to let that lien go. Graydon knows that none of the leaders of the demesnes, including Dragos, will stand for having the Djinn as the puppet master to a demesne leader, and he threatens Malphas.

Malphas knows that as well and strikes a bargain. He will not force his will on Ferion as long as Bel and Graydon do not tell anyone that he holds Ferion’s soul. If they do, Malphas will control Ferion and divulge publicly the affair between Graydon and Bel. And just because he is evil, he forbids Bel and Graydon to see each other again.

THOUGHTS:
Note: I would strongly suggest that you re-read Lord’s Fall if you have the time. A reminder of what happened in that story to the Elven demesne is helpful.

This will not become a favorite story of mine from this series. I didn’t feel the relationship between Gray and Bel the way I have been grabbed by it in other stories. Gray has been eyeing Bel for years and then mourning her loss for centuries after but it seemed too instantaneous on Bel’s part. Giving in to the temptation for a quicky before confronting Malphas, almost in his backyard, didn’t seem smart or logical especially when time was an element.

Graydon can’t talk about what happened with Malphas and Ferion, but he has spent the last 200 years gathering information against Malphas to take to the Elder Tribunal hoping that he would mess up enough that the Tribunal would have to step in, especially when it seems that the lien against Ferion’s soul was just the first of many. As we heard in Oracle’s Moon, going to war with a Djinn can be a long and arduous process. Djinn are creatures of energy and have few weaknesses, that is why honoring your agreements are so important to the Djinn society. Calling them on the carpet for wrongdoing is near impossible and going to war will cost many lives and cause much damage. Graydon is going to call in many favors to fight Malphas and not everyone will be going home unscathed.

I think the most important part of this story is not only the set up towards the changes that Thea seems to be working towards in the series, but also to foreshadow what could happen between Liam and Dragos in presenting us with Ferion’s life with his father. Ferion has lived a half-life for centuries. He is the sole heir to a father who is nearly immortal. As heir, he is not allowed to pursue his own path but since he is not allowed to rule anything, he is kept on the fringe of the Elven court. He becomes bored and self-destructive and in viewing Ferion’s life, we can see what the future might hold for young Liam.

Dragos has been alive since the dawn of the Earth and has been ruling the Wyr demesne since it’s creation. Liam is growing at an exponential rate and already he is thinking of his own future. We are not certain whether or not his declarations at the end of the story are prompted by what happened with Ferion, but I believe that Dragos did not dismiss him outright and took counsel from Pia and Graydon because he now could now understand Liam’s point of view in the downfall of Ferion. Liam is the only other dragon in existence and he is very much like his father. Dragos is probably the most powerful being on the planet and growing up in his shadow will be daunting. Liam already understands that if he does not seek out his own path, rather than being tossed something by his father, he will be seen by the world as weak. Dragos might have discounted Liam’s feelings in this matter, but after what has happened, he realizes he will need to let Liam prove himself.

Although I hate seeing Liam grow up sooo quickly in this series, it will be interesting to see the younger dragon make his place in this series and to see if the next child of Dragos and Pia will also grow at the accelerated rate and then where they will fit this world among Dragos and Liam.

This is one series I am never bored with. Thea always has something up her sleeve to toss at us and keep us guessing what she is up to and where she will take us next.

“So you are not personally being controlled by Malphas,” Rune persisted.

“That’s not quite true, though, is it?” said Constantine.

“Your behavior right now is constricted by something.” For the first time, Grace spoke up, her quiet voice hesitant. “I see connections, you know.”

The focus of the whole room snapped to her, and her demeanor turned self-conscious.  Rune suggested, “Why don’t you explain what you mean by that?”

“My Power as Oracle has become attuned to the Djinn, for a number of reasons,” she offered. “I’ve discovered a way to help injured Djinn heal, and I can see the connections they make, with each other and with other races. Most of the time, I don’t pay attention, but sometimes they become too obvious to ignore.”

Graydon asked, “Can you remove connections?”

At Grace’s side, Khalil’s eyebrows rose, and the expression in his diamondlike eyes grew piercing and fierce. “Connections are made when Djinn strike bargains. You did not just ask my Gracie to break Djinn law, did you?”

“I didn’t ask her to break any laws,” said Graydon, keeping his reply mild and nonthreatening. “I just asked if she could. There’s a difference.”

“I don’t know,” Grace told him. “I might be able to, but I couldn’t swear to it. I don’t think I could do it without alerting the Djinn who made the connection to begin with, so I guess it would be a pretty useless thing to try.”

“I could be hugely important, if you could break the bond Malphas has put on the souls of his victims,” Graydon said. His mind raced to the possible implications. Planning an attack on Malphas would be much simpler if they could free Ferion first.

The Oracle shook her head quickly, dampening his new-found hope. “That kind of bond sounds much more dangerous. I’d be afraid to try anything. For one thing, nobody know how the victims would respond. If the bond is parasitical in nature, removing it the wrong way could kill them, and I’d be worried that anything I might try would alert Malphas.”

Carling asked, “Could you identify someone who has one of those bonds?”

Grace lifted her shoulders. “I don’t know. I’ve never seen anything like it before. I guess, maybe?”

“Why don’t you have a look at each one of us?” suggested Carling. “Tell us if you think anyone here has a lien on their soul.”

Grace’s voice came from the shadowy cloak, sounding slightly distorted. “Now look what you made him do. Khalil, get off me.”

“Gracie, there are dangerous people here,” Khalil said. “What if someone does carry a soul bond? You might trigger a violent response. While you may carry the Power of the Oracle, you are also quite human and fragile. And too precious to lose.”

“Why did you ask her to check everyone?” Julian asked Carling, his eyes narrowed.

“Just humor me,” Carling said. “Graydon and Bel aren’t answering certain questions so some influence is at work on them.  I’d like to know for sure the room is clear of that particular taint. Khalil, let Grace work.”

“I am not preventing her from working,” Khalil said. “I am preventing anyone from harming her.”

Grace’s sigh sounded clearly within the cloak, and she looked around the room.  After a few moments, she shook her head again. “I don’t sense any unusually strong connections, and that’s the only way I would know to look for it. Khalil, will you please get off me now?”

Silently the Djinn flowed away from her body and solidified into a man again. He resumed his former position, arms crossed and unrepentant.