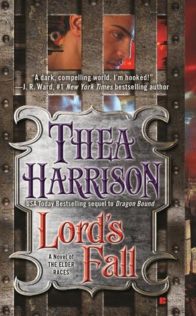 Make sure to check out our interview with author Thea Harrison.

In the latest Novel of the Elder Races, two mates find themselves on different paths, torn between their duty to the Wyr and the passion that binds them… Before she met Dragos, half-human/half-Wyr Pia Giovanni was alone and on the run. Now she’s mated, pregnant and heading south to repair the Wyrs’ frayed relationship with the Elves. Being separated from Dragos is painful, but for the good of the Wyr demesne they need to figure out how to be partners—in more places than just the bedroom. In New York to preside over the Sentinel Games, Dragos is worried about his mate, but knows that finding two replacement sentinels is essential to show the rest of the Elder Races just how strong and brutal the Wyr demesne can be. But as the Games heat up, Pia’s negotiations with the Elves take a turn for the dangerous, straining her bond with Dragos and threatening everything they hold dear.

Thea Harrison shakes things up in her newest book in the Elder Races series. Lord’s Fall returns us to our hero and heroine of Book #1, Dragon Bound. After several books and short stories featuring the Wyr sentinals and other members of the Elder Races, we once again focus our attention on Dragos Cuelebre and Pia Giovanni. Understandably, since there is no question that this story could only be told through the eyes of the very powerful Lord of the Wyr and his new mate.

In the last book Oracle’s Moon, Dragos and Pia are given a prophesy from the Oracle which will soon come to be–

It had spoken of stars dying in agony, and the nature of evil, of Light and Dark as creatures, and Lord Death himself having forgotten he was a fraction of the whole.

“I am not form but Form,” the voice had claimed, “a prime indivisible. All these things were set in motion at the beginning, along with the laws of the universe and of Time itself. The gods formed at the moment of creation, as did the Great Beast, as did Hunger, as did Birth along with Finality, and I am the Bringer of the End of Days…”

In Lord’s Fall, Pia Giovanni has been the mate to the Lord of the Wyr for seven months now, and is very pregnant with her dragon baby who she affectionately refers to as “peanut.” She is going to the Elven domain on a diplomatic mission to try to convince the Elven Lord to lift the trade embargo between the Elves and the Wyr which is financially harming both demesne. An embargo that was imposed after Dragos Cuelebre illegally crossed the Elven border when he was determined to capture the fleeing Pia at any cost in Dragon Bound. As the new First Lady of the Wyr demesne, it is her duty to try to negotiate an acceptable conclusion to this mess which began with her and Dragos.

But Pia isn’t the only one seeking an audience with the Elven Lord and when another faction of Elves, who had closed off their borders centuries ago, decides to show up and ask for help from the Elven Lord, Pia won’t be set aside and can’t let her chance to mend things between these the Wyr and the Elves slip away so she will travel deeper into the Elven domain, into a place between here and the Other land, cut off further from her mate.

But when it comes to light that someone has unearthed a Deus Machinae or God Machine, and they are determined to use it to destroy the world, Pia gets trapped in the middle of an Elven civil war, and the only one with enough power and authority to step in to save the Elven Lord and his people is the powerful dragon–the Great Beast.

As if all this isn’t exciting enough, back in NYC Dragos is holding the Sentinel Games since he now has to replace two of his sentinels, Tiago and Rune, who have gone off with their new mates. There is a gladiator type competition being held in Madison Square Garden where our five remaining Sentinels are competing with all types of Wyr, including some new and interesting Wyr.

Usually an author in a paranormal romance series choose the way they will be presenting their storytelling at the beginning–it is either by a continued character such as Jeaneine Frost’s Bones and Cat or Charlaine Harris’s Sookie Stackhouse, or a group of characters with a central background or location where each book focuses on a new couple with only guest appearance from prior or future heroes and heroines as with Sherrilyn Kenyon’s Dark Hunters or Kresley Cole’s Immortals After Dark.

I LOVE the fact that Thea goes back to Dragoes and Pia.

Giving readers continued stories staring a main character or characters is wonderful for getting to know your characters, but you miss an opportunity to delve into some interesting side characters. In giving readers, a new hero and heroine to watch find love, we leave behind some characters who might still have a story to tell. In returning to and refocusing on our central characters of this series, Dragos and Pia, we get a chance to enjoy more of their story. It would be exciting to see more authors take note of this twist and think about returning to beloved characters and giving them another turn in the spotlight.

(And the last lines of the book are some of the sweetest I have ever read. *sniff, sniff*)

Received ARC from Penguin/Berkley. Thank you.

Since he knew Pia’s true Name, bringing her into a dream was easy. Still, he took time with this one and worked to get the details right. Brushing them into place with his mind like an artist putting the finishing touches on a painting. Then he cast it out, an invisible net woven with Power, and he went to sleep himself and waited.

Part of him marked the passing of time even as he drifted quietly. Then he felt her presence slide into the dream, and he came alert.

The setting was cool and quiet, and a light, delicate wind blew. He had recreated the subtle hues of night.

She was outside. The light, musical tinkle of bells danced through the air. “What the…” she said, sounding disoriented and puzzled. Then she laughed, and the sound was more beautiful then the bells.

He smiled, rose from the couch where he had been reclining and lifted the flap of the tent to look out.

Sand dunes rippled underneath the silvery cascade of moonlight. Several feet away from the tent a small oasis of water, a little more than the size of a comfortable large hot tub, was surrounding by a collection of ferns and palm trees, which didn’t make any ecological sense, but still, the scene was pretty.

Pia stood on a the path between the tent and the oasis, looking down at herself. Pleasure washed through Dragos. She was a symphony of the precious colors he loved the most, silver, ivory and gold, and those gorgeous sapphire eyes. Her loose hair rippled down her back, and the harem outfit he had devised for her to wear was skimpy in all the right places. Bracelets and anklets of tiny bells adorned her graceful wrists and ankles, and her slender, arched feet were bare.

She looked up, still laughing. “You made me look like a belly dancer…oh my. Oh, very much my.”

“What?” he said, strolling toward her with a slight smile. He was barefoot as well. He wore a simple linen robe that wrapped and belted at the waist, with thin cotton pants underneath. “The belly dancer outfit was my favorite part.”

“How very sheikh-ish you look.” Her face tilted up as he neared and her midnight-colored eyes were wide.

The bells at her wrist tingled as she raised a hand and laid it at his chest where the robe parted. Her fingertips were cool on his bare skin, her hand unsteady, resting against him as light as a trembling butterfly. “It’s at times like this that I want to say something incredibly foolish,” she said. She sounded breathless.

He captured her fingers and brought them up to his lips. “Like what?”

She murmured, “Like I’ll wear anything you want me to, whenever you want.”

“I see nothing at all with that statement.” He mouth the words against her fingers.

She snickered. “Of course you don’t. And I’m not saying it. I’m only confessing to the impulse.”

He told her, “You should always tell me your foolish impulses so that I may take advantage of them.”

“That is not going to happen, your majesty,” she informed him. “The ones I do tell you are bad enough.”