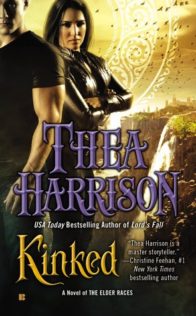 As a harpy, Sentinel Aryal is accustomed to dealing with hate, but Sentinel Quentin Caeravorn manages to inspire in her a burning ire unlike anything she’s ever known. Aryal believes the new Sentinel to be a criminal, and vows to take him out as soon as the opportunity arises. But the harpy’s incessant wrath has pushed Quentin to the limit, and forces him to make a deadly vow of his own.

To put an end to the conflict, Dragos, Lord of the Wyr, sends them on a reconnaissance mission to the Elven land of Numenlaur. Forced to work together, Aryal and Quentin’s mutual antagonism escalates. Each fight draws forth more passion—culminating in an explosively sexual confrontation. But when their quest reveals real danger, Aryal and Quentin must resolve their differences in ways beyond the physical, before the entire Wyr is threatened.

Aryal is a harpy in every definition of the word. Not only in her Wyr form does she changes in the harpy of Greek Mythology with torso and head of a woman and wings and talons of a bird of prey, but her personality is that of a unpleasant shrew. And she likes it that way.

She is the only female Sentinel and in the recent Sentinel games, she once again proved her worthiness of that coveted position. But it is in the last game, that Quentin Caeravorn also earned one of the open spots which was vacated when Rune and Tiago left to be with their mates. Quentin was the former boss of Pia, Drago’s new mate. She might have to put up with Pia, but Aryal knows deep in her bones that there is something off about Quentin. She just hasn’t been able to pin anything specific on him. Two years of investigation has lead to dead ends and dried up leads, but she refuses to have someone as dirty as Quentin at her back.

When their dislike for each other puts them literally at each other’s throats, Dragos has had enough. He is sending them out of New York for the next month. They are being sent on a mission which they are required to complete together, without killing each other, and to find a way to settle their differences or else they will both be replaced.

Both would like nothing more than for an “accident” to help them out with removing their nemesis, but after hammering out their differences with fists, talons and claws, they are finally finding their way around the kinks in both of their dominant personalities.

THOUGHTS:
This story had a lot a fun as well as a few touching moments. Aryal and Quentin are both dominant personalities and more ways than one. I love how they finally deal with their growing sexual tension by offering bargains and timing each other to allow each to have chance to dominate the other.

When they are forced to work together, they both decide that maybe an opportunity will arise where the other will get killed and then they can return to the sentinels without any guilt. Once with they work out their differences to at least some degree, their next thoughts include “hate sex.”

Aryal finally realized she would need to be nice to Pia so that she could get closer to Drago’s and Pia’s newborn son, Liam, who stole Arayal’s heart in just a few minutes of seeing his intelligent, cherubic face.

I really like Thea Harrison’s Elder Races series, and this was definitely a great addition to the rest of the series.

He was going to have to pause to think about this. He didn’t want to. His hands remembered how it felt to latch around her neck, and they wanted to do it again. Flexing his long fingers, he exited the gym–

Just down the hall, the door to one of the elevators opened, and Aryal and Grym walked out.

The sight of her was the same shock to the system as it always was, a raw live jolt of electricity that juddered over his nerve endings. Fueled by a surge of adrenaline, his mind leaped to a higher, faster level. This must be what it felt like for humans to jack on amphetamines.

He lunged down the hall toward her, noting every detail about her as he gained speed. As usual, she wore fighting leathers and her thick, black shoulder-length hair was tangled. Even though he knew that meant she had recently been airborne, she looked as rumpled as if she had just gotten out of bed. Her normally pale skin was flush all over with a clear, high color.

She looked as if she was glowing from an internal flame. Even though her face was uncharacteristically drawn with tiredness, she was still more alive than anyone he had ever met, ten times more vibrant than any other woman he had ever seen.

A stiletto of bitterness lanced him. Gods, if he could ever meet a woman like that whom he didn’t loathe as completed as he loathed her, he might lose this whip of restlessness that drove him. He could live the rest of his life and do nothing, be nothing but completely content. It was hideously unfair that he would look at this harpy and realize that about himself.

She saw him coming. Even though his intent was unmistakable, her fact lit up, because she was just bent that way. As she turned toward him, she swept one of her arms backward, hard, and knocked Grym in the chest so that he staggered back into the elevator. Then she strode forward to engage.

She didn’t even pause to say anything or ask Quentin why. They both knew there were so many reasons.

He leaped at her, and she dove low so that he overshot, but he thrust out one hand and grabbed a magnificent handful of that tangled black hair and yanked her with him.

They tumbled together, growling, arms and limbs entwined. He caught her scent, and she smelled like health woman, clean cold air and arousal.

So the rumors about her and Grym must be true. He liked Grym and found the thought of their pairing so offensive that his growling deepened and grew edged.

She flipped him onto his back. Heaving hard, he flipped them over again and covered her straining body with his. As he pinned her long, taut torso, their hips came into alignment. There was rough friction at his groin, along with her wild scent.

It was so goddamn primal.

Her eyes flashed furiously through her tangled hair. Fire bloomed down the length of his back as she raked him with her talons Quicker than thought, breathing heavily, he punched her in the face. For one split second he thought she looked surprised and thoughtful. Then she twisted underneath him to knee him in the groin. More fire bloomed in an infernal garden.

He still had one fist clenched in her hair. Snarling, he yanked her head back and struck down, intended to fasten his teeth on her bared throat.

One moment they were locked together in a vicious, intimate embrace. The next moment he was several yards away, sprawled in a tangle against the wall in a complete disconnect with reality. He felt as if he had been kicked by a mountain.

Which in a way, he realized, he had been. His mind caught up with what had happened. Broken ribs protesting, he struggled to roll over onto his hands and knees, and he looked back in the direction of the elevators.

Dragos stood where they had been fighting, the harpy prone at his feet. Grym stood quietly in the open doorway of the elevator that Aryal had knocked him into, hands lax, all of his attention fixed on the Lord of the Wyr.

More details sank in. Dragos was dressed in jeans and a thin silk sweater, and he had one boot planted in the middle of Aryal’s back. He looked utterly furious, his roughhewn expression set in lines of brutality.

He also held his sleeping son cradled against his shoulder. Quentin had thought that baby was small before—just six pounds when he had been born, Pia had told him. Held against the tremendous musculature of his father’s chest, he looked as tiny as a small child’s doll.

He had thought he didn’t hold any illusions about Dragos. He knew that the only thing that could possibly take the dragon down was a dedicated army with inspired leadership and experienced magic users. But if he had ever held a secret daydream of someone besting Dragos in his human form in single, unarmed combat, that daydream had just been shattered forever.

Not only had Dragos just taken down two of the best, nastiest Wyr fighters in the world, he had done it by moving faster than Quentin could comprehend.

And he did it all without ever jostling the baby enough to wake him.

Audiobook Review: River Marked by Patricia Briggs
« Rumor Has It by Jill Shalvis
The Fifth Favor by Shelby Reed »