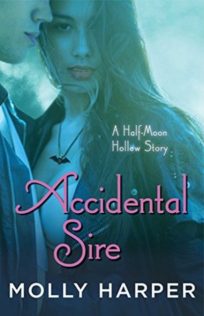 In Molly Harper's newest paranormal romantic comedy, Ben, Gigi's old boyfriend, must find a way to save his new love after a freak Ultimate Frisbee accident. But will she want to live after she finds out how Ben had to save her?

In this exciting addition to Molly Harper’s beloved Half-Moon Hollow series, the focus is on Gigi’s ex-boyfriend Ben. When his new girlfriend is killed in a freak Ultimate Frisbee accident, he’s determined to save her, no matter the cost, even if it means bringing her into the darkness of vampire life!

This was a blend of the good and the bad. It had an interest twist for the series but the romance was sadly lacking.

This story started at the end of Big Vamp on Campus. Meagan Keene was just a co-ed in the new mixed vamp/human hall at Kentucky University until the night she was in the wrong place at the wrong time when she was hit in the chest with a 45-lb free weight being used by the vamps in a game of ultimate frisbee. Things had just been looking up for Meagan. She only had a few more classes until graduation and a cute boy named, Ben, was just asking her out.

Next thing she knows, she wakes up and is snacking on the sweet boy who could have been her boyfriend.  When he suddenly collapses, no one knows yet if he will wake up turned or never wake again.

Becoming a vampire is more than enough of a shock but apparently nothing is going “normal” with Meagan’s transformation, and vampires aren’t known for liking change. Some it seems are still holding out an opinion on that whole “electricity” thing. Meagan shouldn’t have been up yet. Vampires rise in three days not 24 hours. And they shouldn’t be able to turn another person without a blood exchange.  And what the hell is up with Meagan’s two sets of fangs?

Not knowing what to expect, and not being able to risk Meagan controlling her bloodlust and not changing the whole student body in one afternoon, Jane Jameson-Nightengale has Meagan under lock-down confinement at her home in Half Moon Hollow, soon to be joined by the newest vampire, Ben Hanscomb.

While most of the vamps who know about Meagan and Ben are worried what their differences mean to vamps in general, the scientists at the Vampire Counsel are peeing themselves with excitement to see just how different these new vamps are from the standard vampire.

This new twist breathes new life into the series, and gives reason for all prior Half-Moon Hollow residents to show up in this story, but the romance which was set between Meagan and Ben at the end of Big Vamp on Campus falls flat in this novel.

Ben spends most of the book holding a grudge against Meagan for messing up his life plans by turning him into a vampire, but he was the first one calling for a vampire sire when Meagan was dying, giving no worries for the changes it would be bringing to her life. Yes, it wasn’t something he chose, even though he was friends with all vampires in this town, but Meagan didn’t do it to him on purpose and it took him way to long to get past it. By the time he does, he has to get over it quickly since we were almost finished with the story and therefore, it ended up being too little, too late to give us any real romance.

Molly Harper’s usual snarky fun was seen throughout the story.  Ben and Meagan’s unusual turning and trying to discover the facts behind it all made for an interesting story.  This one just lacked a good romance.

The science geeks want to play with Ben and Meagan.

“For starters, your iron and hemoglobin counts are far above a normal vampire’s. Your DNA shows an alarming number of extra genomes thrown into the mix, which may explain some of your more interesting traits.” He stared at me intently.

Dr. Hudson was doing this weird little shoulder-shimmy-nod thing that made him look like a psychotic bobblehead. “It’s fascinating, like a puzzle. I just want to take you apart, see what makes you tick, and put you back together.”

Ben and I stared at him, silent and horrified, both imperceptibly moving farther away from him. Dr. Hudson didn’t seem to realize he’d just said something incredibly creepy and moved from staring at me to moving a rolling covered medical tray to the bedside.

I cleared my throat. “What kind of DNA?”

Dr. Hudson winked at me. “Oh, a whole cocktail of goodies–animal, vegetable and mineral.”

What sort of undead uber-nerd had sired this guy, and how could I ask him to take Dr. Hudson back? Like a cellular level? And what did he mean by–what kind of minerals had DNA? What the hell were we?

When I didn’t respond with the expected girlish giggle, he added, “Just a little science joke. So, kids, we’re just going to expose you to some of our better-known weaknesses and see how your react. Now, Miss Keene, please have a seat.”

Ben raised his hand. “Can we get back to ‘vegetable’?”

“Yes,” I agreed, pointed to Ben as I climbed onto the hospital bed next to him. The papery mattress cover crinkled under my butt, but honestly, the fact that the Council was worried about hygiene was the only comforting thing in this room. “I would like to talk about that.”

Dr. Hudson waved his hand dismissively. “I submitted an initial report to Mrs. Jameson-Nightengale. I’m sure she’ll explain it to you.”

The idea that he couldn’t be bothered to give us details about our own DNA irked me. Dr. Hudson, for all his zip-a-dee-doo-dah cheer, was not a good guy. Hell, I wasn’t even sure he was a decent scientist. Because he whipped the cover off the tray, flourishing like something in an infomercial, to reveal a small silver cylinder, a big wooden cross, a tube marked “Minced Garlic,” a couple of jars of liquid I didn’t recognize, and–

“Is that a wooden stake?” I asked nodding to the pointy wooden object in question.

Dr. Hudson shrugged, as if it was totally expected to find a wooden stake in a medical lab. “Well, sure, we have to know how you respond to being staked. That’s one of our key questions, isn’t it?”

I shook my head. “But it would be answered pretty definitively if we, say, burst into a cloud of dust. Which, even in the name of scientific discovery, seems a little excessive.”

“Yeah, I don’t think we should just get stabbed in the heart experimentally,” Ben agreed. “That’s kind of like claiming that someone’s a werewolf just because they die when you shoot them in the heart with a silver bullet. A bullet to the heart is going to kill pretty much anybody.”

“Let’s just see where the tests take us,” Dr. Hudson said, walking across the lab to check some machine making beeping noises.

“Do we have to stay for this? I mean, it’s reasonable to walk out of a medical appointment if you think your doctor’s going to try to scientifically murder you, right?”

“Jane told us to cooperate,” Ben whispered. “I think that means sticking around until he actively tries to murder us.”

“Can we take our first step towards meaningful friendship by being ‘not getting staked in the heart’ buddies?” I asked him.