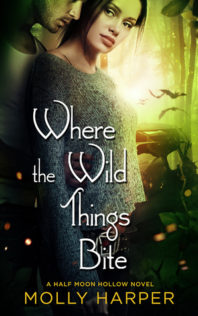 Where the Wild Things Bite (Half-Moon Hollow, #5) by Molly Harper

[box style=”rounded” border=”full”]Molly Harper reminds me exactly why I hate the outdoors so much.  You will be changing your vacation plans after reading this book.[/box]

Anna Whitfield is a bibliographer who was hired to appraise the value and, more importantly, the validity of an ancient tome on the history of shapeshifters. Anna determines that it is in fact a valuable and rare antique and contains many secrets about shifters, who unlike the vampires, were still unknown to humans. Because of the rarity and the value of this treasure, Anna Whitfield is determined to hand it personally back to its owner, Jane Jamison-Nightengale, in the little town of Half-Moon Hollow, Kentucky.

That is what led Anna to be standing in front of the world’s tiniest plane since the only airport near Half-Moon Hollow is a minuscule one-gate hub. Fear of flying is not on the very top of Anna’s list of phobias, but it is high enough to make itself quite known. Anna might not have taken enough anti-anxiety medication after all.

As if the trip couldn’t be any worse, the only other passenger on the flight is a hot, sexy and incredible cocky vampire. Anna is socially awkward enough to hate talking to strangers, especially hot, too full of themselves, very strange vampires who don’t seem to be able to the hint that she doesn’t want to engage in chatty small talk. Little did she know that hot, chatty vampires won’t be the worse thing to happen to her today.

The flight was going well until the pilot decided it was time to rob his passengers, or at least Anna.  When he pulls a knife and tries to take Jane’s book. Anna fends him off, but he still continues with Step 2 of his plan, kill the passengers in a fiery crash. Now is the perfect time to panic, but it is Anna’s vampire traveling companion who comes up with the perfect solution. Jump out of the falling plane. What?? Anna is so against that plan, but he jumps out taking Anna with him.

Well, he might have saved them from a fiery death, but now they are lost in the forest about 300 miles away from Half-Moon Hollow with no idea which way to go and a murderous pilot wandering the woods with them along with a pack of shifters who paid the pilot to kill Anna for that book.

No food. No water. No proper footwear. But plenty of dirt, bugs and a vampire who might at any time determine Anna makes a better snack than a travel companion.

If Anna can survive this ordeal, maybe she was stronger than she thought or maybe next time she would trust FedEx.

THOUGHTS:
Ah, this story reminded me exactly why I hate camping. Bleh!

I will point out that the vampire-hero in this story, Finn Palmeroy, was introduced in the last novel, The Single Undead Mom’s Club. He was the vampire that turned Libby. It was very distracting when I started the story because I recognized the name but couldn’t remember where we met him before. I searched the prior books until I found him.  It was making my crazy.  I saved you.  You’re welcome.

Anna was definitely a fish-out-of-water here. She is a city girl and anxiety ridden. She is a closet survivalist, as long as she was surviving in her closet, in her apartment. She reads plenty of How to Survive guides but usually doesn’t leave her apartment or the library where she does her researching. So crash landing in a forest, miles from anywhere, put her out of her element and led to a lot of laughs, including an obsessive need not to eat a can of Spam that she and Finn come across.

We know that something is fishy about Finn but he is funny and charming and eventually even the priggish, Ms. Whitfield gives in to his charms. Well, after he saves her a few times.

As always, Molly Harper gives us paranormal romance and makes it fun. I always look forward to new adventures in Half-Moon Hollow.

From the other side of the tree, I heard a screech and a crunch-slurp. I knew Finn was only doing what he had to do to survive, but honestly, that was pretty gross. Once the slurping stopped, I came back around the tree. His skin was healed, the scars seeming to evaporate as he slowly sat up.

He blanched, and a shudder ran up his back. “I could say I’ve had worse, but that would be a lie.”

“Want a bite?” he asked, offering me the mostly intact carcass. He was already looking better. The burnt patches of his skin were knitting themselves back together, the tendrils of tissue reaching out to recreate the smooth surface. His color, such as it was, was better, returning to the pale pearlescent sheen natural to vampires; thought the worst areas hadn’t entirely smoothed out, his mouth no longer resembled an open wound. Still, I could resist the lure of possum tartare.

“Not going to let go of that anytime soon, are you?”

“Are you sure you don’t want to try to eat this?” he said, holding up the possum. “We can roast it over a fire or something.”

“Not with Ernie still out there. The smoke will lead him right to us,” I muttered, though I wasn’t sure if my disdain was really for the possibility of discovery or the idea of eating an overgrown rat.

“Is that really his name?” he asked, wiping at his mouth. I nodded. He sneered in disgust. “Terrible name for an arch-nemesis.”

“And no thanks on the possum. I’m a vegetarian.” I told him.

“Very recently,” I said. “As in within the last five minutes.”

One response to “Review: Where the Wild Things Bite by Molly Harper”