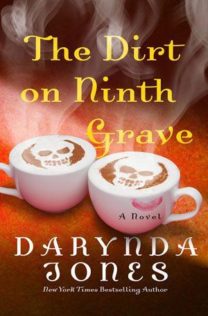 The Dirt on Ninth Grave (Charley Davidson, #9) by Darynda Jones

[box style=”rounded” border=”full”]Charley Davidson might have lost her memory, but she hasn’t lost her talent for getting herself into trouble. We are as frustrated as Reyes waiting to see what it will take to finally return Charley to her old self, but the story has all the usual fun and quirkiness we have come to expect from Charley Davidson and Darynda Jones. [/box]

When we last saw Charley Davidson, she suddenly appeared in an alley in Sleepy Hollow, New York with no memory and a ghost guardian dog. She ends up being taken in by Dixie who owns the local diner restaurant. Dixie gave her a job and a place to stay. Her frantic friends and family were able to track her down and have spent the last few weeks casually keeping an eye on Charley. I believe the only one who doesn’t make a guest appearance in this story is Rocket. Whether posing as a waitress like her BFF Cookie, or posing as three-meals-a-day regulars like Reyes, Garret and Osh, Charley’s friends are there to protect her and support her until her memory returns.

Not only does Charley have a knack for getting herself neck deep in trouble but trouble would find her even if she were hiding in a closet.

Charley might have forgotten who she is, but she starts to realize that seeing the departed and being able to feel what other people are feeling isn’t a normal occurrence. She picks up that Osh and Reyes are not completely human and that Reyes seems to be very angry at her and a bit resentful. Reyes is not only angry that seeing him hasn’t given Charley her memory back, but he is quite pissed off that the local police officer who found Charley wandering the streets has staked a claim and is declaring himself Charley’s boyfriend. Not a good idea to move in on the son of Satan’s woman.

Since appearing in Sleepy Hollow, Charley has picked up a stalker cop, a perverted old man with a telescope trained on her apartment, and the ghost of the headless horseman chasing her down the street.   She also starts to notice the odd behavior of the antiques dealer a few doors down from the restaurant, as well as the strange men who are suddenly hanging around and making Mr. Vanderberg very nervous. She also doesn’t believe the rumor circulating that Mr. V’s wife took the kids and left town. She fears that Mr. V and his family have been taken hostage for something that the antique dealer has, and in true Charley fashion, she secretly (not so secretly) begins investigating.  She is going to save Mr. V’s family, even if it kills her…and it just might.

THOUGHTS:
I binge listened to this series, but I received an advanced paperback for Ninth Grave. The funny thing is that I heard the whole book in my head as if it was narrated to me personally by Lorelei King. Do you think that means I owe her a royalty?

True to her to usual writing style Darynda Jones tosses in a few curve balls along with the fun and excitement, and she also gets Charley beat up. A lot.

I kept waiting for Charley’s memory to flood back and Darynda really does manage to take us the whole way through the story until the bitter end for Charley to have her revelation.   At her sister Gemma’s insistence that Charley needs to recover her memory on her own, no one is allowed to just sit her down to explain who and what she is.  While we realize the characters stopping by are our favorite friends, there it no recognition by Charley.  Even when Cookie slips and keeps calling her Charley, she doesn’t associate that name with herself.   Charley might not remember who she is and while she does realize that Reyes isn’t entirely human, that doesn’t stop that deep down attraction from drawing them both together.

I would safely say that you won’t guess what it finally takes for Charley to remember who she is, but by the end, she will be returning to New Mexico with her family and friends and that leads to the bigger question of what is coming next for Charley now that she remembers who she is and the power that she controls?

Received an ARC from her publicist in exchange for an honest review.

If you are a fan of the series, weigh in on my fan casting of the series at H&H: Graves on the Casting Couch.

I had two scenes marked – one funny scene and one hot Reyes scene. I opted for the funny scene. This old guy made me laugh so much my daughter wanted to know what was going on. I told her and she was laughing. You’ll have to read the hot Reyes scene for yourself.

I jumped the the sound of Angel’s voice behind me and considered exorcising him. But first I had to ask him about the conversation I overheard today.

“This guy giving you a hard time?”

“What guy?” I asked, turning to where he’d nodded. An elderly departed man stood not two feet from me, trying to poke me with a stick. An incorporeal one. Had he died with it in his hands? His hands were shaky, so he kept missing, which worked for me.

“I’m kind of investigating something. Can you go into this house and see if anyone is inside?”

“For you, mi amor, anything. And then we can make out.”

He straightened his spine, rising to his full height. All five feet two of it. “First of all, I died when I was thirteen. But that was years ago. I’m really old now, like, I don’t know, forty or something.”

He shook his head, then disappeared after tossing out a quick “You don’t know what you’re missing.”

A shudder ran through me. I didn’t care how many years he’d been dead. Kid was thirteen. Bottom line. I felt a soft poke at my rib cage and brushed the stick aside.

About thirty seconds later, Angel popped back out again. “Not a warm body in sight. What’s going on?”

I started to reply, then asked him, just in case, “By warm body, you aren’t insinuating that there are some cold ones in there, are you?”

I swallowed hard and nodded.

“Nope. No dead ones either. But there is a really pissed-off cat.”

“Oh, no!” I brushed off another poke and turned an exasperated glower on my attacker.

He lifted the stick and tried to poke my eye. What the hell?

After brushing him off again and stepping away from the elderly version of Charles Darwin as he attempted to identify a new species, I asked Angel, “Do you think it’s hungry?”

My eyes widened in awe. “You can talk to cats?”

“Fuck no, I can’t talk to cats. What the hell?” His brows crinkled just under the bandanna he wore, feigning insult if the laughter sparkling in his eyes was any indication. It made him look even cuter. Even younger.

But he did dis me. No way was I taking attitude from a punkass kid with no skeletal system.

“Look, half pint,” I said, curling my frozen fingers into his dirty T-shirt. I drew him closer until we stood nose to nose. “I don’t know how this shit works, so stop being a little bitch, go back in there, and find me a way inside so I can save the cat.” I shoved him. Admittedly, not very hard.

A slow Cheshire Cat grin slid across his handsome face. “Damn, girl, You got a set the size of a Cadillac. And here I thought you were all shy and sweet and helpless.”

When I clenched my teeth and went for his shirt again, he held up his hands in surrender.

He disappeared just as my fingertips touched his shirt. He was lucky. That time.

While Angel searched for a way inside, I checked out the exterior, which was ridiculous in the dark. I could barely see beyond the other-world enough to put two feet in front of me, much less find a way inside a locked mansion. Especially with Darwin poking me every five seconds.

“Seriously, dude. You have to stop.”

I jumped and whirled around. Angel stood behind me.

“There’s a doggy door. A big one. You can squeeze in through there.” He fought another grin. A suspicious one.

“All right, what’s the catch?”

“No catch. It’s just, I don’t think you’ll fit with your clothes on. Probably best if you take them off.” When I deadpanned him, he added, “You wouldn’t want to get them dirty.”

We strolled around to the back of the house, and he showed me the doggy door. Thankfully, he was right. It was for a large-breed dog. I could actually fit if I wiggled a lot. That would make him happy.

I took off Reyes’s jacket and regretted it instantly. The frigid air swallowed me like an ice-filed ocean, and I gulped a lungful of icy air. Which actually didn’t help. I got onto all fours and pushed the plastic door in. “I totally need a flashlight.”

But I was busy trying to get my shoulders past the doorframe. It cut into them, then into my ribs, then into my ass. When I felt something in that general area, I said, “Angel, that had better be departed Darwin poking my ass.”

4 responses to “Review: The Dirt on Ninth Grave by Darynda Jones”