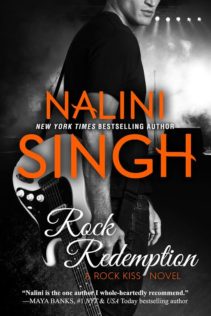 [box style=”rounded” border=”full”]Rock Redemption is a painfully beautiful, rip-your-heart-out romance. I saw several reviews discussing how this story will rip open your emotions and it is all true. You will feel all the pain and torment as Kit and Noah try and work through their love for each other and Noah’s dark past. [/box]

We had gotten hints of a romance gone wrong between Kit and Noah back in Rock Addiction.   Here we learn that from the beginning of Kit’s friendship with the guys of Schoolboy Choir there was always a stronger draw between her and Noah.  They started spending more and more time alone together and Kit felt that they were moving forward romantically.  Noah invited her to his room after a show and she believed that was an indication they would take the next step.  When she used her key to the room, what she walked into was Noah in bed with a groupie.  Kit’s heart was shattered by his betrayal.

Noah set Kit up to find him with the groupie so that he could put to rest any further thoughts by Kit for a real relationship with Noah.  We quickly come to realize that Noah had some kind of sexual abuse in his past, before he met Fox at boarding school at the age of 7, and that sex for him is twisted and not a show of love.

Noah, the bad boy of Schoolboy Choir, is with a different groupie almost every night not for the attention but simply for the physical release that will allow him to quiet his demons for a few hours so he can sleep.  Noah has never ever kissed anyone.  While we know that something happened, it is not until the very end that he has courage to confess his dark secret to Kit.  He carries this secret as his own failing and feels that Kit must never know about it.

Noah knows that he hurt Kit by setting her up and although he is remorseful, he knows he can’t give her what she wants.  He love Kit and he needs her, but he doesn’t know how to get back to just being friends until the night Noah drunk dials Kit and she fears that Noah has gone off the deep end.  He usually doesn’t drink to excess and she finds him surrounded by empty bottles with a vial of some drug nearby.

Although Kit knows that she is risking further disappointment and heartbreak, she agrees to be Noah’s friend so she can make sure he never gets to that point of using drugs again.

It is heartbreaking to watch Noah and Kit try to keep a distance from each other and yet see how perfect they are for each other.  They are so busy protecting themselves, they aren’t really listening to each other the way we the readers are hearing them.  Noah tells Kit how important she is to him but that he can’t ruin what they have with sex.  Yes, we understand that Noah has a deep dark secret that is screwing with his brain and it takes Kit much longer to catch on that Noah has a twisted view of sex.  When he first tells her, all she can hear is that Noah screws every groupie but doesn’t desire her enough or want her.  Her brain is fogged up by her hurt to understand that Noah loves her but can’t see sex as something good between people who love.

When Kit attends a function with Noah and their chemistry is caught on camera, the press start announcing a secret love affair is blooming between the two.  Kit refuses to use Noah to further her own career, but when her PR rep goes directly to Noah, he agrees to pose as the new IT couple to help further Kit’s chances for a big part.  They both know that the biggest risk is Noah keeping away from the groupies.  While being a highlighted couple with boost Kit’s desirability, Noah being caught with a groupie could ruin her.

It is once Kit and Noah spend more time in close quarters, while Noah tries to find ways around his sex as a sleeping pill need, that Kit finally starts to see that Noah has deeper and darker issues and works on adjusting her thinking so that maybe she and Noah could make a real go at life together even if it doesn’t involve sex.

THOUGHTS:
If you are looking for a happy, make you feel good romance, this ain’t it. This story is full of angst and will make you scream “just talk to her (him)” more than once.

Your heart bleeds for both of these characters. Their love for each other and their connection to each other is perfect. Kit struggles with the feeling of being less to Noah and she can’t see past what she feels is his lack of desire for her.

Noah’s story is heartbreaking both what happened to the small helpless boy and then to his family’s reaction. All of this leads Noah to feelings of inadequacy since he couldn’t protect himself. Even at six, he feels he should have been man enough to stop what happened, and that failing has effected his ability to connect with anyone outside of the guys of Schoolboy Choir, even thought the only one who knows the truth is Fox.

At first Noah becomes very mercenary in his need to keep Kit close. He believes he can fake things with her but she isn’t fooled and this is more betrayal which sets back the relationship. Once she realizes that Noah has a twisted sense of sex and that something awful must have happened to him, it is amazing how creative they become in working around his issues until they finally manage to create a real romantic relationship.

Although this is an angsty read, it is truly a beautiful story of two people loving each other enough to fight the demons of the past and create a wonderful life together.

Narrator Justine O. Keef does a great job drawing you into the story and feeling the turmoil of these characters.

Received a review audiobook from Tantor Media in exchange for an honest review.

So many great scenes but some give away too much.  I thought this was a great scene to share and one which becomes pivotal.

Noah opened his own door rather than waiting for the limo driver and stepped out while doing up the tux jacket, then held out his hand for Kit. She slipped her warm, slender hand into his, and his skin tightened, his body attuned to her on a level that was primal and hotly possessive.

And then she was standing with him, a stunning woman with a heart big enough to forgive him for the worst mistake in his life, to trust him once again with the gift of her friendship. He wouldn’t fuck it up this time.

No matter how loud the demons howled.

The cameras had started flashing the instant he exited the limo, but they went insane as he and Kit moved down the red carpet. He kept his hand on Kit’s back throughout, loathe to have the other men here believe she was on her own. Because she wasn’t. For this one night, she was his.

“Kathleen! Kathleen! Who’s your date?” a photographer called out. “What’s his name?”

Laughing, Kit turned her face up toward him, then they turned as a couple to the media. The flashbulbs were blinding, questions and exclamations rising in a roar as the photographers and reporters clicked on the identify of her date.

“Jesus,” Noah muttered without making a face because he didn’t want to ruin the photos, conscious this was an important opportunity for Kit. “It’s a penguin suit, people.”

“I hope your passport’s up-to-date,” Kit said on a dazzling smile. “Japan’s calling.”

“You haven’t won yet.” Coiled muscles eased, his cheeks creasing in a real smile. “I’m not getting any excited calls from Thea.”

“Pfft, the night is young, and you’re looking so pretty.” She moved with him to one of the official gala photographers on their side of the velvet rope, posing gracefully beside him. Then, bowing to requests, she stepped away to give the other photographers the solo shots they wanted of her and her gown.

Noah pretended not to hear the bloodthirsty mob calling for his own solo shots. This was why he didn’t fucking wear suits or brush his hair. It made him too goddamn pretty, though at least he’d grown into his face so that he had a harder edge.

Taking out his phone, he grabbed a few shots of Kit. She blew him a kiss, her eyes bright. Grinning at the resulting image, he asked her to strike a pose. The photographers went wild, clicking along with him. When she finally waved them down and walked over, he immediately placed his hand on her lower back, the silken warmth of her a near-painful pleasure.

“I didn’t realize how huge the media presence would be,” Kit said to him as they climbed the steps, Kit holding her dress just an inch off the carpet with flawless grace. “You’ve done me a huge favor, Noah. This kind of exposure…” She shook her head. “Money can’t buy it.”

“I have a feeling Thea leaked the news we’d be here.” Noah had intense appreciation for Thea’s smarts as a publicist. “She probably hooked up with Aunt Margaret to offer media privileges to an extended number of photographers.” A win-win situation for the charity and for Kit.

Kit bit her lower lip. “Of course she did–I didn’t even think about that. Do you mind?”

“Why would I mind? If I can help your career, I will.” Sadly, Kit’s shining talent wasn’t enough–she also had to win the media war, had to become a public darling America and the world wanted to see on-screen. “Speaking of which, you should turn here.” Her position on the steps, with the majestic columns of the mansion behind her, would make a fantastic shot.

“Thanks.” Kit’s smile hit him right in the solar plexus. “I’m kind of high from the night already–it’s fun.”