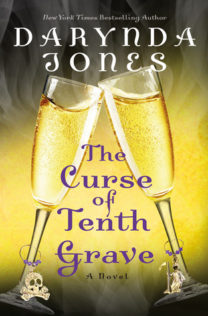 The Curse of Tenth Grave (Charley Davidson #10) by Darynda Jones

[box style=”rounded” border=”full”]This series is sexy, fun and addictive.  We can’t get enough to Charlie Davidson and Reyes Farrow.  Charley is back in New Mexico and back to doing what she does best — getting into trouble.[/box]

Charley’s bout of amnesia is over and she has returned to Albuquerque, New Mexico with all her friends. You would think returning to your old life should be as easy as putting on your favorite pair of slippers, but life has changed significantly for Charley since she walked out her front door almost a year ago. She now has a daughter that she had to give up for her own protection. Charley’s light is a beacon to the dead and to all the malicious supernaturals out there. Satan and his minions still want to get their hands of the baby girl who is destined to bring him down.

She has also picked up several secrets before she left New York. She has in her pocket a god glass which can trap even the most powerful celestial beings, and she might just have to use it on the father of her child. Charley learned that Satan used the god glass to trap one of three Gods of Uzan. He chose the most evil and powerful of these gods, Rey’azikeen, to create his son, known here on earth as Reyes Alexander Farrow. Charley fears more than anything else that she has faced that once Reyes remembers that he was a god, he will become a danger to their daughter and she might just be forced to trap him forever in a hell dimension.

You would think that once she remembers her own celestial name, she would have garnered knowledge of all her celestial abilities and the power to wield them. That and $4.50 will get you a mochachinno. In a human form, even the fact that Charley was a goddess in another dimension doesn’t allow her to wield unlimited power. Not fair, right.

Well, ignoring the possible apocalypse and overwhelming amounts of angels and demons who want to rumble in Albuquerque, Charley Davidson Investigation is back in business. She finally has a case but there is something very fishy about the fact that the ADA has hired her to investigate a murder charge on behalf of the defendant. Nick Parker is so certain that the defendant didn’t kill his girlfriend that he is even willing to hire Charley to find out who did. While Nick and Charley aren’t BFF’s, Charley does agree that Lyle Fiske is innocent. That doesn’t yet give Charley the answers that she needs: if Lyle didn’t kill his girlfriend, who did and why is ADA Parker so certain he didn’t do it?

Charley’s life might not be exactly as she left it a year ago, but one thing never changes, when trouble arrives, and it will, Charley will be right in the middle of it all.

THOUGHTS:
Darynda Jones once again delivers the goods on our favorite grim reaper. While things have changed significantly for the characters in the lat few books, this story brings us closer to the Charley Davidson we knew and loved from the beginning of the series.

While I enjoy a good Urban Fantasy/Paranormal Romance, in this series I enjoy Charley just being the quirky, ditsy character that she is, blended with her ability to see and work with the deceased. Even making Reyes the son of Satan didn’t distract from the nice blend of investigation and paranormal fun. The last few books with Charley’s pregnancy, and throwing prophecies, celestial beings, archangels, gods from other dimension, it is all mucking up the fun and intriguing story lines. while none of that is going to go away, since that is now the underlying focus of the series, this story is more reminiscent of her first several stories and the focus is mostly on Charley and her investigations.

The one complaint that I had through the beginning of the story was the strain between Charley and Reyes. Charley keeps harping that she isn’t sure she can trust Reyes since he was created from an evil god and what if he tries to hurt Beep. Really?? This man hasn’t already proven that even though he’s the son of Satan he is firmly in Charley and Beep’s corner? Then she keeps complaining that Reyes is pulling away from her when she is the one constantly giving him the side-eye and pulling away from him. Reyes has always feared that Charley would walk away from him once she knew who she truly was.  In Ninth Grave, being with and near Reyes, doesn’t trigger Charley to remember who she is  and now in Tenth Grave, Charley is distrustful and standoffish of Reyes.  Of course, Reyes is pulling away. He believes that Charley doesn’t want anything to do with him now that she knows who she is, just like he predicted.

This is the kind of sudden distrust that should be the end of Charley and Reyes once it comes out. All Reyes’s secrets have to do with protecting Charley, whether from demons, hellhounds or evil gods. Charley distrusts Reyes’s loyalty because she found out that he was created from an evil god.  He still was the son of Satan before she found out about the god thing.  Just because she knows now, that changes what?   She is also keeping the fact that he is a god and the fact that she has access to a hell dimension in case she needs to trap Reyes there forever. I think Reyes should be offended that she doesn’t trust him after all they have gone through together.

It was getting late, but sleep was the furthest thing from my racing mind. Apparently that was not the case for Mr. Sugar Buns. He lay back, closed his eyes, and threw an arm over his forehead, his favorite sleeping position.,

I could hardly have that. So, I crawled on top of him and started chest compressions. It seemed like the right thing to do.

“What are you doing?” he asked without removing his arm.

“Giving you CPR.” I pressed into his chest, trying not to lose count. Wearing a red-and-black football jersey and boxers that read, DRIVERS WANTED. SEE INSIDE FOR DETAILS, I’d straddled him and now worked furiously to save his life, my focus like that of a seasoned trauma nurse. Or a seasoned pot roast. It was hard to say.

“I’m not sure I’m in the market,” he said, his voice smooth and filled with a humor I found appalling. He clearly didn’t appreciate my dedication.

“Damn it, man! I’m trying to save your life! Don’t interrupt.”

A sensuous grin slid across his face. He tucked his arms behind his head while I worked. I finished my count, leaned down, put my lips to his, and blew. He laughed softly, the sound rumbling from his chest, deep and sexy, as he took my breath into his lungs. That part down, I went back to counting chest depressions.

After another round, he asked, “Am I going to make it?”

“It’s touch-and-go. I’m going to have to bring out the defibrillator.”

“We have a defibrillator?” he asked, quirking a brow, clearly impressed.

I reached for my phone. “I have an app. Hold on.” As I punched buttons, I realized a major flaw in my plan. I needed a second phone. I could hardly shock him with only one paddle. I reached over and grabbed his phone as well. Started punching buttons. Rolled my eyes. “You don’t have the app,” I said from between clenched teeth.

“I had no idea smartphones were so versatile.”

“I’ll just have to download it. It’ll just take a sec.”

Humor sparkled in his eyes as he waited for me to find the app. I’d forgotten the name of it, so I had to go back to my phone, then back to his, then do a search, the download, then install it, all while my patient lay dying. Did no one understand that seconds counted?

“Got it!” I said at last. I pressed one phone to his chest and one to the side of his rib cage like they did in the movies, and yelled, “Clear!”

Granted, I didn’t get off him or anything as the electrical charge riddled his body, slammed his heart into action, and probably scorched his skin. Or that was my hope, anyway.

He handled it well. One corner of his mouth twitched, but that was about it. He was such a trooper.

After two more jolts of electricity–it had to be done–I leaned forward and pressed my fingertips to his throat.

“Well?” he asked after a tense moment.

I released a ragged sigh of relief, and my shoulders fell forward in exhaustion. “You’re going to be okay, Mr. Farrow.”

Without warning, my patient pulled me into his arms and rolled me over, pinning me to the bed with his considerable weight and burying his face in my hair.

It was a miracle!

2 responses to “Review: The Curse of Tenth Grave by Darynda Jones”