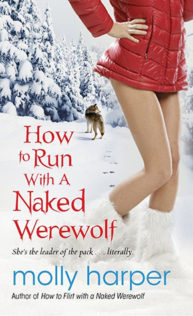 Anna Moder has just witnessed a shooting, seen her car pulverized, and rescued a wounded stranger only to discover he’s really a werewolf. And by her recent standards, things are actually looking up. Lycanthropes don’t faze Anna. Doctoring a wolf pack outside Grundy, Alaska, is the closest thing to home life she’s known in years. But hitching a ride to Anchorage with long-absent pack member Caleb Graham that’s a risk. Part of her itches to whack his nose with a newspaper. The rest is trying unsuccessfully to keep her own paws off every delicious inch of him.

The problem is, Caleb employs his lupine tracking abilities as a not quite-legal bounty hunter, and Anna is suspicious of both him and his profession. On the run from her past, with old problems closing in, she’d like to stay far, far away from anybody with connections to the law. Caleb, however, seems determined to keep her close. Are his intentions noble, or is he working a more predatory angle?

Anna’s been dreaming of returning to a semi-normal life, but now she’s experiencing a strange new urge . . . to join Caleb in running with the wolves.

Anna Moder is on the run again. Actually, Anna Moder isn’t even her real name. That’s the name she took on when she made it up to Alaska and went to work as the doctor for a werewolf pack in a little village in the valley outside of Grundy. Now she had to leave her sweet little house and her new friends, because he has found her once again.

Anna has been on the run from her husband for over three years now. Since her husband is a psychotic, controlling, computer genius, it has been impossible to make him her ex-husband and to get him out of her life. She tried to move to Florida to get away from him, but it seems stealing all her money and destroying her credit rating wasn’t enough fun for him, and he showed up at her front door to break her jaw and drag her back. With no way to protect herself from a man determined to control her or kill her, she has been running as far and as fast as she can.

With the help of an underground organization to help women like her, she has been able to change her identity and stay under her husband’s radar, but now she needs to get to Anchorage to pick up a new identity and get a new place to run. She didn’t expect to walk into the middle of a gun fight or feel the need to protect the stranger being attacked. Nor did she expect the stranger to be a werewolf.

Caleb Graham (former citizen of the valley) is on the road working as a not-quite-legitimate bounty hunter. He is willing to take Anna to Anchorage as a thanks for her saving him, but he just has to do a few errands on their way. Neither Anna or Caleb seem to mind that that his errands are keeping her from getting to Anchorage too fast as they team up to track down their wayward prey.

But Caleb and Anna are both hiding secrets which will destroy their budding relationship. Once those secrets come to light, will they be able to forgive or will they need to walk away?

THOUGHTS:
I really love the lighthearted fun to be found in every Molly Harper book. This was the best way to pass a snow day. After a storm closed my office, I wanted to make good use of my bonus day and chose a book I didn’t get to read during the chaotic holidays. I was enjoying Caleb and Anna’s story so much I had it done in an afternoon.

Caleb and Anna spent their time running around Alaska, never really getting anywhere, and mostly getting to know each other which just made for an entertaining story. Some paranormal series are intense, but I just love the carefree fun and great one-liners which make up a Molly Harper book.

This is definitely an amusing story with  fun characters, and although we do have a get together at the end with Mo, Cooper, Maggie and Nick, the story is mostly the new characters of Caleb and Anna.

We pulled into the parking lot of a diner that looked halfway reputable. As the truck slowed, I heard something, probably one of the dozen or so ChapSticks I kept in my bag, roll under the seat into the back of the cab.

“I’ll get us a booth,” he told me as I shoved the seat forward. Peering under the front seat, I felt along the hard plastic edge for my errant lip balm, but instead, my fingers closed over a strange metallic curved object tucked into a groove under the seat.

“What the—?” I pulled it out in the light. Handcuffs. I felt under the seat again and found plastic zip ties, a collapsible metal police baton, duct tape, and rope, all Velcroed to the bottom of the seat. And now that I looked at the back of the front seat, I realized that there was a collapsible metal grate attached to it, the kind that cops had in their squad cars to keep suspects contained in the back.

I dropped my bag, backing away. This guy had a serial killer’s tool kit in the back of his truck.

A strange sense of betrayal bloomed, astringent and bitter, in my chest. For a moment, I’d let myself believe in this guy. I’d wanted to trust in that promise of safety, in the prospect of being able to relax into a familiar wolfy territory for just a few days, to feel that I wasn’t alone. The fact that I’d wanted it so badly, so quickly, scared me even more than the possible uses for three sets of adjustable bungee cords.

I scanned the front window of the diner. Caleb was already sitting in a booth. If I just slipped away, he probably wouldn’t notice for a while that I hadn’t followed him in. There was a bar up the main street. Maybe I could hitch a ride with someone there. I hadn’t done that in a while, and obviously, my self-preservation skills were pretty rusty. But I guessed the devil you didn’t know would likely be safer than the devil you knew had freaking duct tape and cuffs in his truck.

I had to admit the collapsible baton was cool. I supposed it was much more effective than my slapjack, not to mention having a better reach. And I rationalized that if I took it, he wouldn’t be using it on unsuspecting hitchhikers. I palmed it and dropped it into my bag.

Slinging that bag over my shoulders, I glanced back at the diner window but didn’t see Caleb. I backed away from the truck and—

“Ack!” I shouted, jumping out of my skin and cursing myself for not keeping the baton handy.  No matter how much time I’d spent around them, it was always shocking to me that big, bulky werewolves could move so quietly.

While his tone was friendly, his posture was tense. He frowned down at me. “Just wanted to see what was taking so long. You OK?”

“I think this is a mistake,” I said, my fingers frantically searching through my bag for the slapjack. I stepped away from him, putting the open truck door between us. His brow furrowed, and he took a step toward me. I stepped further away, onto the sidewalk.

“This whole ‘riding together’ idea. I’ll be fine on my own, really. Thanks for getting me this far, thought.” I turned, taking brisk, long steps up the sidewalk. He stood, staring at me, perplexed. “Good luck…with your whole Ted Bundy thing.” I muttered softly as I rushed away.

In a blink, Caleb was in front of me, holding my arms against my sides. “What did you mean by that?”

Great, I forgot that my new best friend had an advanced serial-killer kit and superhuman hearing. Oh, and healing powers. I was one lucky girl.

“What did you mean?” he demanded. His eyes followed mine back to the open truck door and the cuffs and zip ties lying out on his floorboards.

“What normal person rolls with this sort of thing in his backseat, Caleb?”

“There’s a good explanation for this.”

“Look, come inside, have some breakfast with me, and I’ll explain. If you still think I’m a serial killer afterward, I’ll pay the check and you can stay here at the motel until you figure out what you want to do.”

“I wasn’t serious!” I explained. “How stupid do you think I am?”

“Look, what’s the harm in having breakfast?” he chided. And he added, “With plenty of witnesses.”

I might have objected that I was fine, not hungry in the slightest. But then my traitorous empty stomach growled, as if on cue.

He smirked at me. “I bet this place has great pancakes.”

I growled in frustration, my shoulders sagged, and I let him nudge me through the front door of the diner.