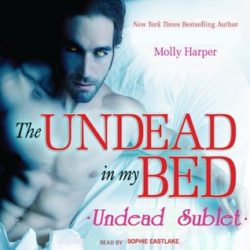 In “Undead Sublet” by Molly Harper, executive chef Tess Maitland is banned from her five-star kitchen in Chicago to recover from “exhaustion”. Choosing a random rental house in Half-Moon Hollow to spend time in, she’s unaware that the house comes with a strange man.

Even though Sam Masden’s ex-wife has rented the house out from under him, the divorce settlement allows him access to it for another ninety days. With Tess unable to go anywhere else, and Sam unwilling, a war of epic proportions is declared – and romantic sparks and heavy pots fly.

This review only reflects the Molly Harper story in the The Undead in my Bed Anthology.

Chicago’s top chef Tess Maitland is taking a vacation. At least that’s what she’s going to call it. Maybe the stress and the long hours were getting to her and maybe the vegetables really weren’t singing showtunes—okay, they probably weren’t, but that was no reason the restaurant owners should force her to take a sabbatical, which is restaurant code for “breakdown.”

She rented a house in a little town of Half Moon Hollow to be near her old mentor. The house really does need some upkeep, but it might not be so bad for the month she plans to be here. Although it does creak a lot at night when it settles—wait, that sounds like the microwave. Maybe it’s a burglar…who wants a snack? There’s only one way to find out.

Well, her landlord mentioned the dishwasher, the washer/dryer, but didn’t mention that the house came with it’s own vampire, and Sam Masden doesn’t plan to leave until the divorce is final and the house is sold at the end of the month.

So now it becomes a battle of wills, and cheap tricks, to see who can force the other out of the house before the end of the month.

I enjoyed this as much as I did any of the other Nice Girl/Half Moon Hollow stories. I loved the tricks that Sam and Tess dreamed up against each other, some of which got a bit nasty. I also like that while Tess wasn’t with Sam at the house, she was around town hanging with Jane, Andrea and Jolene.

Unfortunately, because this was a short story, there just wasn’t enough time for a really decent amount of each and although I love Jane and the girls, this took away from the fun of watch Tess and Sam play tricks on each other, and also took away from the building relationship once they stopped bickering and started working together. It was broken down to a quick “so the days went by where we got into a routine…” So the romance part went from the trick playing part, to the staring longingly into each other eyes with little in between build up. So that felt forced and a little awkward at the end. You wanted them to get there, but there wasn’t enough there that you really feel it.

It was an enjoyable story. I just don’t feel it was the best one of her stories since it tried to do too much for a short story.

This is part of an anthology, but I received just this portion as a special Valentine’s gift from audible.com. The only thing that threw me was that I recognized the narrator, Sophie Eastlake. She narrated the Thea Harrison Elder Races series on audiobook. She does a good job, but since this was the only Molly Harper audiobook not narrated by Amanda Ronconi, the voices were different for Jane and the gang, and it kept making me go “Wait. Who’s that?”

This was copied off of the audiobook so I apologize for paragraphing and formatting issues.

“What the hell is wrong with you? Do you have any decency? You wanna hide my stuff. Fine. Use sleep deprivation to drive me into a psychotic episode. Allrighty then. But when you mess around with my pans, that’s going just on step too freaking far.”

“Really? This is what pushed you over the edge?” he asked blandly as he poured his warmed blood into a mug. “I messed around with your cookware.”

“You don’t touch a chef’s pans!” I shouted as he took a long drink, wincing as the blood rolled down his throat. I smiled sweetly pulling a carefully wrapped dropper bottle from my pocket and placing it on the counter in front of me.

“What the—“ he asked, clearing his throat and pulling at the collar of his plaid workshirt. By now he was feeling that tickle of discomfort near the back of his tongue. That feeling that something was definitely not right with his evening meal.

“Ever hear of something called ‘The Ghost Chilli’?” I asked. Rolling the plastic wrapped extract bottle between my thumb and forefinger. “In the pepper family it’s basically the crazy cousin who just got out of prison. Around a million units on the scoville heat scale.”

He gave me a confused frown and if I wasn’t mistaken there was just the hint of sweat popping out on his upper lip. I didn’t know vampires could sweat.

“That’s about 400 times hotter than the average jalapeño pepper.”

“What did you do?” He demanded, rubbing at his throat. With the rush of spicy blood to his cheeks, I could see what he had looked like as a human, ruddy and viral. Like something out of a hunky farmhand of the month calendar.

I cleared my own throat forcing myself to focus. This was war damn it. Dirty. Nasty. Non-sexy war.

“Well. I called my friend, Sikar, who works in my favorite spice shop and asked him where I could find something special.” I grinned nastily. “for my roommate. He just happened to know a story about 40 miles from here that carries extract of ghost chilli.”

“You put it in my blood bag?” He grunted, coughing and spluttering as the capsaicin set flame to his tongue. He reached into the fridge, tore open another bag and dumped the still cold contents into his mouth. I snickered.

“Not just that bag.”

“Uhh!” he cried. Dropping the doctored bag and running for the faucet. He stuck the sprayer into his mouth and turned it on full blast. When that failed to quell the heat raging through his mouth, he ran for the shower.

“Did I mention that water only makes the oil spread around?” I called.

I dropped the bottle into the trash. Thinking better of it, I fished the bottle out, emptied it and buried it in the backyard so he couldn’t use it against me later.

When I came back into the house, a very wet, very red Sam was practically vibrating with rage. His fangs were down and he looked every inch the dangerous vampire. I suddenly wondered about the wisdom of this weird little war, and it occurred to me that I should have had those worries before I pranked someone with superstrength.

“So? No yelling?” I asked, faking bravery as he glowered down at me. “No calling me names or making empty threats?”

“No.” He scooped his hands under the lines of my jaw and dragged me to him. I squeaked as his mouth clashed with mine, pulling my tongue into his mouth to dance with his. I braced myself against his bare chest, fingertips digging into the cool flesh. His lips dragged across mine and his tongue rippled over every ridge and bump of my mouth. He bit harshly down on my bottom lip, drawing just the tiniest bit of blood to the surface. I could feel my nipples blossoming into little points through my shirt as he pulled the blood from the wound. It was like some warm thread was running directly from my thighs to the flow of the blood and every time he pulled on it, that thread drew across my nerves with a luxurious tension. I was panting as if I’d run a marathon by the time he pulled away.

“What the hell was that?” I demanded. He leered, halfway between self-satisfied smirk and impish grin.

And that’s when the tingling started. “Oh. Mother—“ I gasped as the chilli oil that now coated my lips and tongue began to burn.