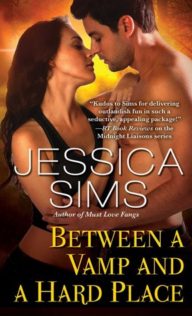 Between a Vamp and a Hard Place by Jessica Sims

[box style=”rounded” border=”full”]Delightful and witty. Jessica Sims is your next favorite author.  This is my second book by Jessica Sims and remembering how much I enjoyed the last book, I was excited to receive a copy of this book.  As I read, I saw this as the next Tina Fey/Amy Poehler movie. Someone get on that, please.[/box]

Lindsey and Gemma have been best friends since they met in the State orphanage when they were little and have grown up to be closer than sisters. They own a business that sells vintage treasures online and are working hard to open a storefront.   Gemma lands an opportunity to sell an entire estate and she jumps on it…with all of their capital. This estate sale will now make or break their fledgling business. Oh, and did she forget to mention that the estate was a condo in Venice?

With no choice, Lindsey and Gemma head over to Italy only to find that the condo is a hoarder’s dream world and no one has been in the place for years. With only a month to go through hundreds of boxes and hopefully find some treasure among all the junk, Gemma and Lindsey need to work round the clock and dig it. Luck might just be on their side when Lindsey stumbles upon a hidden basement filled with rare collectibles. She also stumbles upon a large crate located in the very back. A crate which contains a coffin…a coffin which is actually occupied.

The gorgeous body inside looks pretty good for an old corpse and she’s guessing the giant wooden stick popping out of his chest like a done Thanksgiving turkey might have had something to do with his death. No matter what possessed Lindsey to yank it out, that decision becomes life changing when removing the stake awakens the vampire from his 600 year hibernation.  Now Lindsey feels responsible for Rand and agrees to help him find his vampire buddies.

Things don’t go exactly as planned, especially when they  realize that one of those old “friends” was probably responsible for slamming that stake in Rand’s chest to begin with.   Will Rand finally get some answers or will he simply be bringing Lindsey like a housewarming present into the home of an angry vampire?

THOUGHTS:
I really enjoyed Jessica’s fun and quirky writing.  Added to the snarky, witty banter between these sisters by love is the whole fish out of water story of Rand who was staked and put into a vampire hibernation over 600 years ago.  She could have done even more with that since nothing was the same as when he went  to sleep and Rand should have been a little more freaked out by everything.  In fact, one of Rand’s friends had more of a problem with the current wardrobe choices than Rand did and his friend has been around and awake to see the changes in the world.

While reading the story, Tina Fey and Amy Poehler took on the characters of Lindsey and Gemma in my brain and they just fit perfectly.  I want to see this as their next movie.

It is noted as part of the Midnight Liaison series but it didn’t appear to have anything to do with the dating service and there were no “guest” appearances from other characters in the series.  I have the first three books in this series and one or two of the novellas.  I really have to make some time to squeeze these in.  This book was an easy read and I read the entire book in a day.

If you haven’t read a Jessica Sims (a/k/a Jessica Clare) story, you should definitely give this one a try.

I convinced Rand to say outside the bedroom for a few minutes, trying to assure him that no, I wasn’t running away again, and truly, I wasn’t trying to betray him. I was just going to break things to Gemma…gently. Well, as gently as Hey we have a vampire could go. So I tiptoed into the room, sat on the edge of the bed, and nudged her. “Gemma. Wake up.”

She came awake with a snort, peered around the room, and groaned, flopping back on the bed. “What time is it?”

“God, I fucking hate you. Why are you waking me up at this hour?” Gemma whined, pulling a pillow over her face. “Someone better have died.”

Oh, the irony. “So I have good news and bad news. Which one do you want to hear first?”

She peered at me from under the pillow. “Uh-oh. Bad news?”

I clapped my hands over her mouth even as Rand slammed into the room, the heavy wooden door banging against the opposite wall. His eyes were wild, his longish hair flying. At the sight of him, all menacing in the doorway, Gemma’s shriek died. Then she looked at me, wide-eyed. “That’s him?”

“I guess that’s the good news.” If there was any.

“Wow.” She stared at him, then at me. Then she leaned over and pinched my arm.

“Ow! Okay, I’m definitely not dreaming.” Gemma fluttered her lashes, then patted the edge of the bed. “Come sit down. So, what are you, a vampire? Or just incredibly hot and in my room at three in the morning?”

“Why aren’t you freaking out a little over this?” I couldn’t believe how easily Gemma was accepting the fact that here was a vampire in the bedroom.

“Well, it might be that I’m still half asleep,” Gemma said with a yawn. “But you found a hot guy in Venice who’s dressed like a guy from the Renaissance faire and you have a big bruise on your neck. And we have a coffin downstairs. So the fact that the dude is hot and not eating our faces? I’m calling that a bonus.”

“Give him a few minutes,” I muttered.

But Rand came and sat on the edge of the bed. He took Gemma’s hand in his and kissed the back of it as if she were a princess instead of a girl in an old ratty T-shirt with her hair standing on end. “It is a pleasure to meet you.”

“Oooh,” Gemma said. “It must be true about vampires being charming. Do you also turn into a bat?”

Rand gave her his signature sexy grin. “I am afraid that is but a myth.”

Gemma thwapped my arm and continued beaming at Rand. “Can I see your teeth?”

He smiled widely, pulling back his lips. His fangs shot out, elongating, and both Gemma and I flinched backwards. Rand hissed.

“I–I’m good now,” Gemma said, her hand clenching my arm. “Thanks for the show.” She sidled a little closer to me and gave me a wary look. “So how exactly is it that we went from coffin in basement to vampire in bedroom, pray tell?”

I told her the entire tale. Maybe it would have sounded like a ridiculous story if it hadn’t been for the fact that Rand was in the room with us, poking at the alarm clock with a wary finger and then moving to the mirror. He didn’t show up, but we did, and he kept lifting the edge of it away from the wall to try and see what was “behind” it.

It was clear that Rand had no clue about modern anything. And that made the whole vampire thing a bit easier to go down, I imagine.

“Soooo, now we have a vampire,” Gemma said, watching curiously as Rand picked up a discarded bra from the floor and tried to figure it out. Her lips twitched with amusement, and she looked back to me. “Can we keep him?”

“We can’t just leave him on his own,” Gemma said. “Look at him. He’s so sad and confused.”

I looked over, and he was trying to open the closet door. Or rather, he didn’t know how. His fingers moved along the seam, and he completely ignored the doorknob. Then he tried to peer through the seam and gave up.

“Bless his heart,” Gemma said. “He doesn’t even know how to use a doorknob. You said he’s not a dog, but there are dogs that know more than he does.”

He bites like a dog. I thought unhappily. “Well, don’t worry about it. I told him I’d take him to the nearest vampire.”

I looked over at her in surprise. “What?”

“We both know you’re not good with men. And you’re a bit of a control freak.” Gemma gave me an apologetic look and a pat on the arm. “And all that stuff in the basement needs to be taken care of, in addition to the rest of this apartment. Like you said, it’s going to take all month just to do what we have to for this place. You can’t spend your time running around with a stranger.”

She had a point. I did like to control things. And with the treasure trove in the basement, there was so, so much that needed to be handled delicately and with the utmost of care.

“And I know you don’t trust me with things.” Her smile was faint. “So, you know, I can handle the guy. I can do that much at least.”

Oh. That felt like reproach. Had I hurt Gemma’s feelings with my control-freaky ways? Hurt her self-esteem when it came to helping handle the business? Here I thought we both just focused on the things we did best, but maybe I was wrong. Maybe my need to control everything meant I’d hurt my best friend’s feelings somewhere along the way.

“It cannot be thus,” Rand said, interrupting my thoughts.

“Hmmm?” Both Gemma and I looked over at the vampire in surprise.

“The fair Lindsey has promised to be my blood vassal. She has sworn it with a kiss to her liege.”

Gemma’s eyes went big as saucers. “Did she, now.”

I wanted to kick that smug look off Rand’s face. “Yeah, for some reason, he thinks I”m lying when I say the word is round.”

“I see,” Gemma murmured. “So while I’ve been sleeping, we’ve acquired a medieval vampire and you already made out with him.”