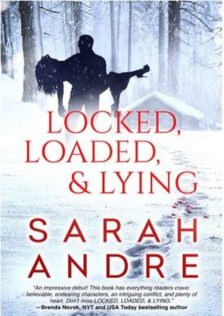 [box style=”rounded” border=”full”]I started this book awhile ago and had to keep putting it aside, but I was definitely intrigued enough to come back to it to get the final reveal of the murder and the motive.[box]

Lock Roane, also known as Lock and Load, was one of the top skiers in the world when his volatile romance with socialite Tiffany van der Kellen ended in her bloody murder. Lock and Tiffany were the only ones in the locked condo and Lock was found covered in her blood. It looks like an open and shut case for the prosecution. Worse yet, Lock was so drunk that night, he isn’t even sure that he didn’t kill her.

Jordan Sinclair is a PI and an independent journalist. She is also hiding from the authorities for shooting her abusive father a decade ago. Her father is out of jail and looking for financial compensation from Jordan or he’ll take out his payment on her sick mother. When news comes out that a tabloid is willing to pay $250,000 for a photo and an article on Lock, who has gone into hiding until this trial, Jordan calls in all her favors to try and narrow down where Lock could be hiding and takes off to Colorado for an interview.

Is it dumb luck or fate that has Jordan crashing her car in a snowstorm just outside of the cabin where Lock is holed up? Lock isn’t sure if he can trust the pretty girl who crashed at his door but he isn’t about to let her die in the cold.

Jordan has the chance of a lifetime but is it too much to hope that she can get Lock to talk without giving away who she is? Hiding the fact that she is a journalist, she tells Lock that she is a PI who has been sent by her boss to help him with his case. She has some theories and if he’ll talk with her, she can use her connections to find the real killer.

Lock isn’t ready to trust Jordan, but he is running out of time. His trial starts next week and even he is uncertain that he’ll be acquitted. As they talk, Jordan starts to see that the cocky man that the tabloid called Lock and Load is just a facade Lock used to keep people from getting too close. And getting to know Lock the man is making it harder for Jordan to write an article that could destroy Lock before he even gets to trial.

Can Jordan risk her mother’s safety and actually do what she promised and help Lock prove his innocence or will digging deeper prove nothing more than the fact that Jordan is alone in a cabin with a violent murderer?

THOUGHTS:
I kept getting pulled away from this story but I kept going back to it. I was definitely intrigued enough to want to find out what actually happened the night of the murder.

I don’t know that the whole substory about Jordan being in hiding for shooting her father and needing money to pay him off was a necessary plot point.   There was certainly enough going on with working through the murder investigation and added to that was Jordan being hurt in the car accident. It just seemed to be overreaching  and complicated an already twisted story. Jordan could simply have been pursuing the story for money for her mother’s growing medical bills, etc. and the abusive father (which was more necessary to Jordan’s character development) could have stayed in jail.

Other than overreaching a complex story plot, it was well-written. We see a pre-murder Lock who was a minor celebrity and acted a bit of a diva as well as his coked up socialite girlfriend. Their relationship was destructive with constant fighting, cheating and break ups. These two should have packed it up long ago. Caught up in the bright flashes of the paparazzi and their own self-importance, they both had no idea of a normal relationship was like. The post-murder Lock has had a reality check and is certainly more likable. And we can agree with Jordan with how much we hate the falsehood of the Lock and Loaded persona whenever it pops out.

If you would like to read a suspense that will actually have you guessing a bit, you should give Lock, Loaded & Lying a try.

“That was some nightmare.” Eyes like liquid silver perused her in the dim light. God help her if she’d shouted out in her sleep. She’d learned long ago to hide behind a mask, to appear as perfectly normal as everyone else.

Her features instinctively settled into a neutral expression now. “It was only a dream.”

“I’d have caught you.” A faint smile ghosted across his face, and an indescribable warmth spread through her. With a gentle squeeze, he let her wrist go.

She struggled to sit up on the flimsy cot, and his arm encircled her, hauling her upright as he sat next to her. Maybe it was him smelling of fresh air and fearlessness or the remnant of the chilling dream, but she leaned into that strength, closing her eyes again. His breath flowed warm on her temple, and the tiniest of contented sighs escaped her.

“You’re so damn hot when you’re like this,” he murmured.

She glanced up sleepily. “Huh?”

“All soft and quiet and not trying to conquer the world.”

He seemed to be waiting for a reaction, but she was dumbstruck.

Slanting his head, he hesitated for a fraction of a second. Perhaps waiting for her to resist. Or call him his brother’s name. Instead her breath hitched in glorious anticipation.

The arm encircling her drew her closer with ragdoll ease. Soft lips, still cool from outdoors bushed hers in a feather-light kiss. Then another… Just enough for her to feel the languid pressure and taste a hint of peppermint.

He eased away, and her euphoria went into free fall.

“Sorry,” he murmured, his grin sheepish. “Even at my worst, I’ve never come on to a fevered patient.”

She exhaled softly. What a charming apology–and he looked so awkward.  Once again, the last two reactions she never expected from a notorious playboy She wanted to assure him it was okay. Lean in and kiss him this time, only much longer. She absorbed the undercurrent of heat still simmering in that smoky gaze, daring herself. A simple kiss… What would it hurt?

In the blink of an eye, reality conked her on the head. What would it hurt?” Her derailed mission was back on track, but access to him and his secrets was clearly a limited-time offer. Besides, Starr News wanted facts about the murder, not how sweetly Lock Roane kissed.

As if she’d physically slapped him, shock registered in his face a split second before his expression shut down. His arm slid off her shoulders.

She dropped her gaze, unable to hide the overwhelming guilt. She was about to ruin him. The real Lock Roane. The man who came back for her. Who held her after a nightmare and apologized for a tender kiss.

This genuine guy he hid so carefully from the world left her breathlessly giddy. It would be so easy to fall for him. So dangerously easy. But she needed to focus all her energy on digging up his secrets, on writing the story and protecting her mother. Besides, her tabloid goal was sleazy enough without delving into anything deeper with him, physically or emotionally.

Review: Through the Fire by Katie Ruggle
« Review: Sweet Ruin by Kresley Cole
Review: Between a Vamp and a Hard Place by Jessica Sims »