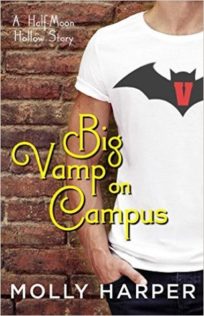 [box style=”rounded” border=”full”]I was a bit disappointed in this novella. Since we already knew the characters of Ophelia and Jamie, we should have jumped right in and gotten more out of this story. It ended up being more of a filler and a lead in to the next novel coming out in 2017 The Accidental Sire.[/box]

You’ve asked for years when Ophelia and Jamie would get their own story and now it’s here! How will Ophelia adjust to living in a dorm room now that she has been banished from the Council and forced to matriculate at college with Jamie? Communal showers! Horrible, pretentious roommates! Humans who try to be FRIENDS! The horror!

Big Vamp on Campus focuses on Jane Jamison-Nightengale’s “child” Jamie and his girlfriend, Ophelia, as they start their first term at the local college now that they are catering to undead students. We met Jamie in Nice Girls Don’t Bite Their Neighbors when Jamie is the victim of a hit-and-run accident and Jane turns him into a vampire. We have watched the downfall of Ophelia from scariest member of the vampire Council to her disgrace in trying to get rid of Gigi.

Ophelia attempted to get rid of Gigi since Gigi is Jamie’s best friend and she was helping him apply to college and trying to take him away from Ophelia. Ophelia believes that Jamie is her “blood mate.”

The majority of the story focuses on how the stuffy and pompous Ophelia, who is used to having all the vampires bow and scrape to her power, and how she deals with life as a freshman nobody in a dorm situation. Freshman must live in the dorms and share a room so her money and connections won’t get her anywhere. It is also a mixed human-vampire dorm and Ophelia hasn’t spent time with humans in a century or so. So we gradually see the rehumanization of Ophelia as she adjusts to dorm life and meets some human girls. We also see her Skype with her little (psycho) sister, Georgie, who is being forced into a period of a second childhood by Jane who has taken her in while Ophelia is in school and is treating her like any child of her physical age.

While I say it focuses on Jamie and Ophelia, in truth Jamie doesn’t make it into too much of the book. He is spending a good deal of his time with his new dorm mates playing video games. I wasn’t sure as I was reading this whether or not Ophelia was going to realize that her obsessive focus on Jamie was based on the fact that she hadn’t spent much time around other attractive vampires her own age. While Jamie is playing video games, there is another student in Ophelia’s class, who is considered a vampire hipster, who prefers going to museums and concerts, things that seem to be of more interest to Ophelia. Would she finally realize that she and Jamie weren’t really blood mates and that she was obsessing over the only attractive male in her physical-age bracket?

While the story seemed to be going that way, we suddenly curve back to Jamie and the new flirty hipster disappears into the background. To me it seemed a bit jerky that this sudden contemplation by Ophelia whether or not she wanted to go out with this hipster-vamp is quickly aborted and she is suddenly back in Jamie’s arms having sex.  It is one of the human girls who warns her off hipster-vamp and maybe it was simply a set up so Ophelia can have human girlfriends?  Not sure yet.

For fans of the series, it is a quick read and there are tiny plot points to note which I am sure will be part of the next story.  How many other hints are in there, we won’t know until the next book comes out.

In the end, we don’t exactly watch Ophelia mellow out, but we do see her realize that there is more to the humans than she gives them credit for and she starts to open up to having some girl friend time and loosening her nervous grasp on Jamie.

In the end, this novella is just like I’m Dreaming of an Undead Christmas.  Rather than standing on its own, it ends as more of a lead in for the next book which will feature two other students from the college, Gigi’s ex-boyfriend and one of the human girls that Ophelia befriends.