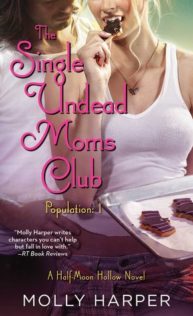 [box style=”rounded” border=”full”]Molly Harper takes us on another delightful trip to Half Moon Hollow. This is a great series. I love when a paranormal series just has fun and pokes fun at itself and the folks at Half-Moon Hollow are crazier than most.[/box]

Libby Stratton was desperate. Her husband died two years ago in an accident and she was loving her fight to cancer. She had a choice to make, let the cancer win and give up her son to be raised by her in-laws or find a sneaky way to stay alive. Not that her in-laws were bad people, per say. They just kept treating Danny like a mini-Rob, rather than see their grandson as his own person with his own likes and wants.

That’s what led Libby to place a personal ad for a Sire-for-Hire.  Okay, maybe it was very naive of Libby to meet a strange vampire at the Lucky Clover Hotel and maybe it wasn’t a great idea to take all those over-the-counter sleeping pills so she wouldn’t feel any pain, but all’s well that ends well, right?  Okay, so the new council members, Jane Jameson-Nightingale and Dick Cheney aren’t happy with the newest vampire on the block and have taken over her training personally.  Especially since Jane has indicated that Libby’s sire is “an asshat” and shouldn’t be trusted.

Libby is happy for the help.  It is thanks to Jane and Dick that Libby knows she won’t be attacking her son once he comes home from his camping trip.  Due to their hard work and the fact that he stinks of unwashed boy and campfire.  There probably isn’t a vampire hungry enough to take a chomp out of that.  Ewww.

Once Libby knows that she is safe around her son, it is time to get down to all the other pressing mom issues that she needs to deal with.  School starts in about a week.  She still needs to get back to school supplies and deal with who is going to pick up Danny from school now that Libby has a new sunlight allergy.

Not everyone is happy with Libby’s new lifestyle change.  Her in-laws were all ready to take her son away and Libby thwarting their plans gets their collective panties in a wad.  In fact, instead of celebrating the fact that Libby is no longer dying, they take her to Court to prove that she is now an unfit mother.

And it is not just her in-laws that she is having problems with.  The other parents at school are whispering behind Libby’s back.  No one will let their kid come over to play with Danny.  But even being the most unwanted parent in Half Moon Hollow can’t get Libby out of PTA duty.  They might not be willing to take her cupcakes, but they have no problem assigning her to the most undesirable of PTA duties.

Learning to be a mommy vamp isn’t going to be easy, but Libby would rather be a kicked off the carpool list than leave her son to her in-laws.

THOUGHTS:
I love both of Molly Harper’s series. I love that she can take paranormal romance and have such fun with it. All these characters are crazy and quirky, and changing the series from Jane Jameson to Half-Moon Hollow has just opened it up to all kinds of possibilities.

In fact, I think that Libby’s transformation to vampire is one of the least crazy themes Molly has gone with so far. As a Mom I can imagine making this desperate choice quite easily and it seems strange that Libby gets such abuse from the other moms.

I liked that Libby quickly makes friends among the paranormal community where she never was able to with the regular school moms. Women are so catty sometimes.

She has a great love interest in the hot, tattooed single dad in town. Their boys hit it off a lot faster than they do in the beginning, and you know from all the angry sparks flying in their initial meetings while they snipe at each other can only lead to hot sex later in the story. I would have like a little more Libby/Wade time.

I was practically skipping to my van, even with the enormous number of shopping bags I was carrying. Despite its being a relatively nondescript gray, I was able to find the van easily, thanks to the decal on the back that read “I like big books and I cannot lie.” It helped separate my car from all of the other mom-vans with stick-figures on the back. I had briefly thought about getting a zombie stick family, but considering the whole dead-husband-slash-vampire-mom thing, that was probably unseemly.

And while I found the van easily enough, I also found that there was a motorcycle parked incredibly close to my driver’s-side door. As in, I couldn’t open the damn door. It was a beautiful bike, a sleek black classic Harley-Davidson with a swirling silver pinstripe along the gas tank. But while I could appreciate the aesthetics, I also wanted to drive my car home as opposed to jogging. I loaded the grocery bags into the back hatch and considered using my vampire strength to pick up the Harley and move it. But I’d read somewhere that touching a man’s bike was a big no-no in the motorcycle world, and the last thing I needed to do was piss off a random Hells Angel in the Walmart parking lot.

I would not crawl to the driver’s seat from the back gate of my van. I wasn’t sure my skinny jeans would hold up to the strain. I could crawl in from the passenger’s seat, but I wasn’t actually sure that I could back out of the space without hitting the bike. And while I wasn’t so worried about being beaten up by a biker, I probably couldn’t afford to replace a vintage Harley.

“Whatever crazy-ass evil thing you’re planning to do to my bike, just back away and do somethin’ else. Crack my kneecap or do the spleen-rippin’ thing, but just leave my bike alone.

“I wasn’t going to hurt your precious bike,” I shot back as Wade dropped the backpack into the saddlebag slung over his bike’s seat.

“You were thinkin’ about it,” he said, pointing his finger at me.

“I–I was not,” I insisted. “I couldn’t afford to replace it, so I was fighting down the urge.”

He quirked an eyebrow and actually smiled at me. A real, sincere, mockery-free smile that actually made me want to smile back. I bit back the urge, but it was there.

“So why are you standin’ here, eyein’ my bike in a suspicious fashion?”

“Because you parked it so freaking close to my van that I couldn’t even get into it.”

“Well, I only parked so close because I got distracted by the ‘big books’ sticker!” he exclaimed.

I laughed, pinching the bridge of my nose and trying really hard not to like the cranky redneck. When I looked up, he was still grinning at me. I let loose a shocked gasp. “You’re enjoying this, aren’t you?” I accused. “You enjoy winding me up, like some sort of backward, backwoods form of flirting. You’ve got one of those weird fetishes where you can only get turned on by the sound of a woman yelling at you while pelting you with balloons filled with banana pudding.”

Wade went pale, and his full mouth fell open. “I’m tryin’ to come up with a smartass comeback, but my brain seems to have gone ‘TILT.'”

I snickered. “That’s not the first time I’ve had that effect on a man.”