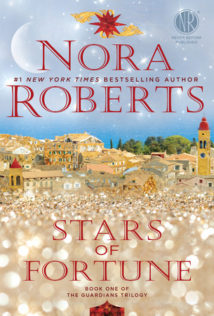 Stars of Fortune (The Guardians Trilogy, #1) by Nora Roberts

[box style=”rounded” border=”full”]While any Nora Roberts book is entertaining, fans will note too many story line similarities between this novel and her recent The Cousins O’Dwyer series as well as her other stories with a supernatural twist.[/box]

In a time long ago, three goddesses created three stars to honor the dawn of new Queen who would do great things. Yet, it was a fourth, Nerezza, a goddess who practiced the dark magic, who was not invited to the participate who tried to take the gifts of the three goddesses. The goddesses sent them into the heavens but they knew that eventually, the stars would fall to the Earth. Nerezza just needed to be patient and wait for her time to collect the stars.

Sasha Riggs is an artist and a bit of a homebody. Sasha is also a seer and her visions make their way into her art. She knows that it is time for her to travel and her pictures are drawing her to a little island of Carfu, Greece.

In her visions, she is exploring the island with five other people, people that she know will become very important to her. There is also a darkness which surrounds the island and the adventure that they will undertake, or maybe mission would be a better word. They need to find gems that shine like stars and they have to read them before the darkness takes over.

Once Sasha arrives in Carfu, she quickly stumbles upon Riley Gwin and Bran Killian. Sasha takes a chance and explains why she approached them and shows them her drawings. Neither Riley nor Bran are seers like Sasha, but neither are they surprised by her revelation. They too were drawn to this area for a reason. Riley is an archaeologist and Bran comes from a long-line of witches.

Riley seems to know everybody and soon finds them a place to crash where they will have privacy and can focus on their search for the others and the missing star. As they come upon, Sawyer King, Annika Waters, and Doyle McCleary, they listen to Sasha’s story and view her drawings. They too have all been drawn here and agree to join the group, but none are very forthcoming about why they are here.

This group is not going to succeed until trust can be established among them and no one knows that better than Nerezza. She too know that they are being drawn together to find the star, and she is patiently watching and waiting to grab the star from them.

THOUGHTS:
I feel that Nora Roberts books are the hardest to review. In general, if compared to the other novels being published, most NR books are well-written, enjoyable and introduce good characters. The stories draw you in from the beginning and hold your attention throughout the entire story. There is no question when compared to other writers that Nora Roberts is a leader in romance novel writing. So, if I am comparing this to other romance novels, Nora Roberts would score a 5 star rating.

But Nora Roberts’ novels sometimes need to be judged in a category all their own. The biggest problem with a writer who has over 200 stories published is that stories start to sound alike. That can be okay in that some writers will write stand alone novels which are all taking place in the same universe that they created. I don’t believe that Nora Roberts is indicating that in any of her various series. Each series or trilogy stands alone in its universe. This isn’t Stephen King and his town of Castle Rock, Maine.   There are no crossovers in Nora’s novels.

Saying all that, I found myself very distracted while reading Stars of Fortune by all the similarities to last’s year’s release of The Cousin O’Dwyer trilogy, and not just that trilogy.  She seems to draw from the same idea in all of her paranormal stories.   Nora quite often writes trilogies which brings together six strangers (3 men, 3 women) who will pair up during the course of the adventure.  There is always a powerful antagonist that they can’t kill until the final battle, no matter how many times they try.

This can be a problem when you a fan of a certain author. The known writing style is very comforting and one of the reasons we choose a certain author time and again, but the simple fact that I just a similar storyline/plot/character is distracting. And we are not just talking happenstance, I just read a similar Nora Roberts trilogy with the same storyline/plot/characters. She really should have broken this up with another contemporary trilogy. Two back to back paranormal/adventure trilogies stood out to me as Nora grabbing the best of her last ten paranormal/adventure trilogies and mashing them up into a new book.

When you once again have witches in your storyline casting spells that are quite similar, I am going to start to believe the Nora is creating novels by witchcraft or realize that there is some fact behind her witchcraft and start creating spells of my own.

If this was your first Nora Roberts’ novel, you will think I am an idiot for not enjoying a well-written adventure, but if, like me, this isn’t your first Nora Roberts novel, you will be left wondering why you just paid $10 to re-read The Dark Witch.   Even though Stars of Fortune is rehashing the best of prior stories, it really wasn’t the greatest cast she has put together and overall, I wasn’t that excited about it.