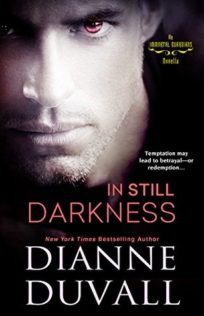 In Still Darkness by Dianne Duvall

[box style=”rounded” border=”full”]I love Dianne Duvall’s Immortal Guardians. Richart is one of the few Guardians who can teleport. That makes him just a bit cooler than his twin, but don’t tell him I said that. I thought it was adorable that Richart develops a bit of a crush on Jenna after saving her, and even though this actions are a bit stalkerish, we know that he has a good heart. [/box]

Richart d’Alençon has been an Immortal Guardian for about 240 years but the night he saves Jenna McBride from a group of vampires, is the night that truly changes his life. Guardians are not supposed to date humans, but he is so drawn to the lively Jenna that he can’t think about anything else but seeing her again. He wants to take the relationship further, but not until he can confess the truth to her. When Richart is wounded and drugged by an unknown enemy, he teleports directly to Jenna’s living room, carrying swords and covered in blood, just before passing out. Maybe she won’t notice anything weird about that? Uh, oh. If he survives the night, he’ll be in so much trouble.

THOUGHTS:
I love the Immortal Guardians series, and we got to know Richart a little more in the Phantom Shadows, where he starts to befriend the black sheep, Bastian.  We also see him sneaking phone calls to his human girlfriend and although Guardians aren’t suppose to date humans, Bastian doesn’t toe the line, so he’s not about to turn him in for breaking the rules.

Jenna comes off a little flaky but not flaky enough to do something stupid when Richart magically appears in her living room covered with blood, even if her grown son it opting for tossing him out into the sun to protect his mom.

I definitely enjoyed Richart and Jenna’s story. This had all the fun, excitement and great characters that I have come to expect from Dianne Duvall.

This was originally released as part of the Predatory anthology but it can now be purchased on its own.

“I was attacked by vampires?”

“Why didn’t you tell me?” How could he keep something like that from her?

“I was attacked, Richart! You should have told me!”

“How?” he asked helplessly.

“Easy. You should have said, Jenna, I know this is going to sound strange, but you were attacked by vampires and I rescued–okay, I see your point. I would have thought you were off your rocker.” She rubbed a shaking hand over her face. “I can’t believe this. Did they…? What did they do to me?”

“Other than the bite, you were unharmed. They must have just taken you when I came upon you.”

“Am I infected?” If all Richart had said was true, she would turn into a psychotic vampire if she transformed. She didn’t have the special DNA need to make her immortal. She couldn’t read minds or teleport or see the future or whatever else they could do.

“No. A single brief bite won’t turn you. You would either have to be bitten fairly often over a stretch of time or have your blood drained until you were on the brink of death, then infused wholly with infected blood.”

And the vampire had only bitten her once. Briefly.

Richart covered the hand she had braced on the mattress with one of his. “Are you all right?”

She met his concerned gaze. “I’m freaked out over being attacked and having no memory of it. That’s really scary.”

“One got away?” Panic shrieked through her. “What if he came back? What if he bit me again and I just can’t remember it?”

“Have you experienced missing time again? Have there been any blank spots you couldn’t recall?”

She thought hard, trying to think of any other instances. “I don’t think so. But how can I be sure?”

“I’ve been guarding you,” he admitted, seeming almost ashamed.

“I used speed and stealth to obtain your work schedule and have been at the store every night when you arrived and departed in case he returned and tried to harm you.”

She stared at him. “Every night?”

“Is he likely to return?”

“No. He would have done so before now.”

“Yet you continued to watch over me.”

He shrugged. “At least you said watched. Sheldon kept accusing me of stalking you.”

One response to “Review: In Still Darkness by Dianne Duvall”