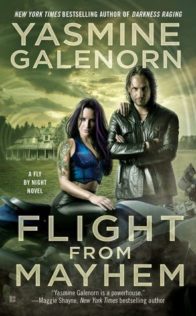 Flight from Mayhem (Fly by Night, #2) by Yasmine Galenorn

[box style=”rounded” border=”full”]This story wasted time on romance issues which took away time from an actual story and then left the romance issues hanging unresolved after taking away from the plot. Best I can give this story is a great big “MEH!”[/box]

The Fly by Night Detective Agency is a Private Investigation firm for paranormals to deal with paranormal issues. Release a Salamander from the fire realm while practicing your portals without your teacher’s permission? Call Fly by Night.

Fly by Night gets a call from Detective Chase Johnson of the FH-CSI. Chase is cross-over character from her Otherworld Series. Chase has a paranormal serial killer on the loose and not enough resources at the FH-CSI to investigate. There is someone killing elderly fae and stealing all their money. The problem is that bank cameras are showing the fae withdrawing their own funds. How could this be since forensics is indicating that they were dead at the time they were supposedly at the bank?

Why did it take a conference between the Fly by Night investigators in the next scene for someone to go? Isn’t a doppelganger able to shift into anything and wouldn’t they be able to imitate the victim? That thought went through my head as soon as Chase said they showed up at the banks when they were already dead. Hey. Duh! Is there a supe who can mimic people?  Chase especially should have that kind of basic knowledge of what is out there especially since people tell the cops all the time “wasn’t me.”

The one thing I can’t stand is when an author repeats information over and over again. We know Shimmer’s background from the last story but you can give us a basic overview of her life as an orphan in the dragon realm, that they have a caste system based on dragon color and which also involves who your family lineage includes. As an orphan, Shimmer would have no family lineage and was an outcast.  All those circumstances made her unmateable and a loner.   Please assume at this point that I have read the information presented and I am smart enough to retain that information for the total of the 336 pages you have written. I do not need to be reminded over and over again that life was different there. She was a loner, now she had friends. Alex wants to be her boyfriend. Boy, she was always a loner. It would be so different. No one would want her in dragon realm. She’s never had a relationship. GOT IT!  I REMEMBERED!

It was the relationship part of the story which bothered me here. I love a good romance so why are you making the romance painful. Although it was probably not a great idea to become sexually involved with Alex Radcliff, vampire and Shimmer’s boss and parole officer while she was booted Earthside, it is Alex who comes off pathetic and needy this entire book. He has a stalker ex-girlfriend who is a succubus and who decided Alex is her possession and wants him back, or at least doesn’t want Shimmer to have him. So she is destructive and dangerous. Alex’s response. I’ll go talk with her. I just need to explain it to her in person. She just doesn’t understand that we’re over. Even Shimmer, who admits to being naive about relations, doesn’t think that it necessary or smart and Alex needs to be a bit firmer. While the succubus makes trouble, Alex is whining “I want to be exclusive” to Shimmer. It’s okay if you don’t.  Be honest, but do you? do you? do you? do you? Shimmer eventually gives in and maybe I’m in love, I’m not sure though, but the whole succubus stalker stays up in the air and I guess will be dredged up for the next book.

With a story line of fae serial killers, a hungry fire Salamander on the loose downtown and a haunted house across the street for Shimmer, plus an old friend showing up with a stalker of her own, there should have been real excitement to this story. But everything was settled with a whimper instead of a bang. Everything except for both stalker matters which no one can do anything about.  Ghost, salamanders and doppelgangers – 0/Stalkers – 2.

And let’s not forget that werewolf Ralph was asked to marry his sister-in-law because his brother abandoned her and the kids.  The brother brought shame to the pack and the only way to make it right is for Ralph to step in.  So….werewolves are part-Amish?  Who knew.

The romance was awkward and pathetic, the action flatlined, stalkers are left stalking and the incessant droning on of Shimmer’s backstory leaves this story firmly in the “Meh” pile and I am uncertain if I even want to bother with the next installment.

Review: Witches with the Enemy by Barb Hendee
« Review: Trouble Walks In by Sara Humphreys
Review: Gone Too Deep by Katie Ruggle »