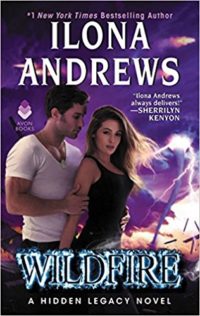 Just when Nevada Baylor has finally come to accept the depths of her magical powers, she also realizes she’s fallen in love. Connor “Mad” Rogan is in many ways her equal when it comes to magic, but she’s completely out of her elements when it comes to her feelings for him. To make matters more complicated, an old flame comes back into Rogan’s life…

Rogan knows there’s nothing between him and his ex-fiance, Rynda Sherwood. But as Nevada begins to learn more about her past, her power, and her potential future, he knows she will be faced with choices she never dreamed of and the promise of a life spent without him.

As Nevada and Rogan race to discover the whereabouts of Rynda’s kidnapped husband and are forced to confront Nevada’s grandmother, who may or may not have evil motives, these two people must decide if they can trust in each other or allow everything to go up in smoke.

I am so happy that I delayed in picking up this series. It was awesome to binge the whole thing. This was a great finale to the trilogy, and there is now going to be a novella and a connected trilogy feature Nevada’s younger sister starting by the end of the year.

Nevada is coming to terms with Rogan and his men being right outside the perimeter of her property. She wasn’t happy that he so conveniently purchased all of the blocks surrounding her home, but with everything going on, her family needs the protection. Especially since her grandmother, the head of House Tremaine, has found them.

Victoria Tremaine is a very danger truth seeker, like Nevada, but unlike Nevada, Victoria doesn’t worry about conscience or other people’s rights. If someone has something she wants, she had no problem going into their mind and ripping it right out. Victoria is also the last Prime of her House and when she dies, House Tremaine dies with her. Victoria won’t allow that to happen. She wants Nevada to join House Tremaine even if she needs to harm Nevada’s family to make that happen.

With no other options to protect her family from her grandmother and just about every other House gunning for her, the Baylor family will be facing the trials to become House Baylor. It is the only way to be protected from attack. New Houses are protected for several years and any other House that tries to attack will suffer consequences.

Nevada’s grandmother isn’t Nevada’s only problem. Just as she and Rogan are trying to figure out their relationship, Rogan’s former fiance, Rynda Charles needs Rogan’s help. Her husband has been kidnapped and she doesn’t know who else to turn to, but she knows she can lean on Rogan. To make matters more complication, Nevada recently killed Rynda’s mother so…awkward.

And while Rogan’s ex-fiance is hanging all over him looking for support in her time of need, Rogan is trying to make sure Nevada understands all her “options.” If Nevada and her family pass the trials, as an emerging House, other Houses will seek to make alliance — marriage alliances — with House Baylor. Houses will be courting her, especially ones with more common abilities as genetics will lead to more powerful offspring. Nevada knows that Rogan loves her so why is he trying to pawn her off on other men and talking about genetic matches?

Let’s sum it up. Power crazed grandmother – check. Ex-fiance hovering over your man – check. Dangerous trials for House status – check. Boyfriend making sure you understand your other “options” – check. And conspiracy trying to remove the annoying truthseeking who is mucking up their plans — double check.

Nevada and Rogan have all the odds stacked against them, will they be able to emerge with their sanity and lives intact. And will they ever get to simply go on a date?

This is an exciting ending to the trilogy and although I would have like another series featuring just Nevada and Rogan, I am certain I will enjoy the spinoff just as much once it is released.

I parked the car, got out, and walked around the warehouse. It was easier than punching the code in and going through all the doors inside.

I turned the corner. A twisted wreck that might have been a car at some point lay mangled in the street. someone had taken a car frame, crushed and twisted it, like a piece of aluminum foil, and then tossed it onto the street. Odd.

Ahead the commerce-size garage door stood open, spilling yellow electric light onto the street and another dented wreckage. This one looked like some giant pressed the car into a ball and decided to practice soccer tricks with it.

The motor pool was mostly empty. Someone had conveniently moved the vehicles to the side, leaving an open space in the center. Smaller chunks of metal, wrenched the twisted, littered the concrete floor. Grandma Frida leaned against Romeo. He was Grandma Frida’s pet project. He’d started out his life as an M551 Sheridan, a light armored tank, armed with nine antitank Shillelagh missles, and other fun things. However, Granma Frida had made modifications, and ever since Romeo saw some action almost two weeks ago, she’d been tinkering with him nonstop.

At the far end, near the inner wall, Rogan loomed, like the living embodiment of manly darkness, by two large screens, studying the footage of Garen. On the left, Bern sat in a chair a few feet away from the screen with his keyboard on his lap.  Bug had straddled a chair backwards on the right and leaned over the back of it, his chin on his forearms. My mother sat near Bug, Grandma Frida’s knitting on her lap. As I approached, she picked at it with a crochet hook and unraveled another tangled row. Two blankets lay on the floor, next to a half-finished bowl of popcorn. My sisters must’ve been in attendance.

I paused by Grandma Frida and nodded at the metal carnage.

“He was watching your date and the walls started buckling. I needed some old frames scrapped so I gave him something to do.”

“They went to bed. While you were having your adventures, we’ve been running tornado drills all day. They’re sick to death of running across the street into the basement.  Don’t worry, they watched the whole thing. You’ll get an earful tomorrow.”

I rolled my eyes. That’s what was missing in my life, the teenage perspective. “What’s Mom doing?”

Grandma Frida gave me the evil eye. “That yarn cost thirty-eight dollars a skein. I want her to salvage it. I tried doing it myself, except I have frayed nerves today. I was going to set it on fire for closure, but your mother took away my blowtorch.”

I nodded and went to stand by Rogan. “Did you catch all that?”

“I especially like the part where he casually threatened me.”

I leaned forward to look at his face. The dragon was out in all his terrifying glory. I grinned. “What are you thinking about?”

“Technically, I can. I choose not to. And I wasn’t thinking about killing him.”

“If you go over to his place and break his arms in five places, it would look bad. People will be afraid to do business with me.”

“I wasn’t thinking of breaking his arms either. I was thinking of hamstringing his corporation, ripping it apart, and selling it piece by piece while he watched.”

Mad Rogan, the Scourge of Mexico. A civilized and considerate enemy. “You can’t ruin every man who threatens me.”

“Yes, I can. Besides, I would only have to ruin the first couple and the rest will get the hint. Except for the Maderos, who are particularly stupid aparently.”

“It’s okay. I had a nice chat with Frank and Dave’s grandpa. We understand each other now.”

On screen, Garen reached out and touched my hand. The carved biceps on Rogan’s arm visibly tensed. Behind us, a chunk of metal rose in the air and crimped, contorting with a hard screech.

Review: Awaken The Darkness by Dianne Duvall
« Review: Burn for You by J.T. Geissinger
Audiobook Review: Written in Red by Anne Bishop »