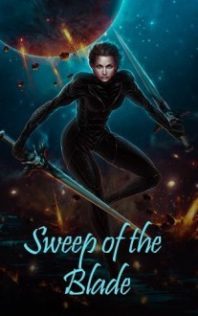 Sweep of the Blade (Innkeeper Chronicles, #4) by Ilona Andrews

Maud Demille was a daughter of Innkeepers. She knew that a simple life wasn't in the cards, but she never anticipated what Fate would throw at her.

Once a wife to a powerful vampire knight, Maud and her daughter, Helen, had been exiled for the sins of her husband to the desolate planet of Karhari. Karhari killed her husband, and Maud had spent a year and a half avenging his debts. But now all the debts are paid. Rescued by her sister Dina, Maud had swore off all things vampire. Except she met Arland, the Marshal of House Krahr. One thing led to another and he asked for her hand in marriage. She declined.

Try as she might, she can't just walk away from Arland. It doesn't help that being human is a lot harder for Maud than being a vampire.

To sort it all out, she accepts his invitation to visit his home planet. House Krahr is a powerful vampire House, and Maud knows that a woman who turned down the proposal from its most beloved son wouldn't get a warm reception. But Maud Demille never shied from a fight and House Krahr may soon discover that there is more to this human woman than they ever thought possible.

Published as an online free serial before the book is compiled and self-published shortly after completion.

I like Dina and Sean in the Innkeeper series, but they are seriously upstaged by big sister Maud and Arland, and of course, little Helen.

As we already know, Dina’s sister Maud and her daughter Helen were exiled to a dessert wasteland called Karhari after her vampire husband’s failed plot to murder his brother and take his position as the House Marshall. Maud plead with her former mother-in-law to allow their three-year-old daughter Helen to remain behind but her pleas fell on deaf ears as the family was more than happy to get rid of the lowly human and her half-vampire mutt. Dina, Sean and Lord Arland rescued them from their exile after Maud’s husband is killed and they take them back home to Earth and Dina’s Inn, Gertrude Hunt.

Maud and Arland trained and fought together to protect the Inn.   Before the fighting ended, Arland  declared his feelings for Maud and asked her to marry him.   While Maud can admit that she has fallen for Arland as well, she can’t put herself and her daughter through the gauntlet of politics of another vampire House.   Vampires are vicious fighters and live a warring and feudal lifestyle, living in castles which are guarded by knights.   Arland might be House Marshall of House Krahr but his mother is Preceptor and Arland bringing a human bride and her half-vampire daughter isn’t going to go over any better for Maud than it did before.

When House Krahr calls Arland back to Daesyn to deal with a House matter, Maud has a choice to make.  And as much as she doesn’t want to deal with another House, she can’t imagine allowing Arland to walk out of her life.  So she gives Arland a solid maybe which he is willing to take for now.

When they arrive at Daesyn, House Krahr has been requested to host the marriage between two feuding vampire houses.   There is no question that there is something really off about their request but unless they have solid proof, House Krahr can’t lose face by refusing their guests to come to Daesyn and make themselves at home.

Even feuding enemies get a warmer reception than Maud.  Arland’s mother isn’t happy about the announcement of  Arland’s engagement to a human and her refusal to marry him.

Poor Maud is trying to determine if she should follow her heart or her head and what is best for her and her daughter while being attacked by her future mother-in-law.  It is making it hard to figure out what these other Houses are trying to do.  But whether or not she is going to join House Krahr, she will fight to defend Arland and protect her daughter.    These vampires might underestimate the human in their midst, but Maud will make sure it will be the last mistake they ever make.

As much as I like the magic of Dina in her Inn and the interesting alien characters who arrive, there really is nothing more exciting than a down and out fight including fists, swords and maces.

Arland, Maud and Helen already make an adorable family unit so we know how we want this story to end.

But Maud’s prior House treated her like a trained monkey, the human brought out during company to recite in Ancient Vampire and to show off her fighting abilities.    Maud pretends ignorance when she is dragged into the wedding preparations of the other Houses while them whisper about her in Ancient Vampiric.  Maud is an amazing strategist, lying low and not taking the bait when provoked allowing them to keep believing her weak while she gathers information.  She is also the daughter of Innkeepers so it is solely due to her intervention, that the visiting alien guests in attendance do not get insulted and leave which would be a black mark against House Krahr’s hospitality.

Maud teaches all the vampires a valuable lesson not to underestimate her as she wins the begrudging respect of Arland’s mother and the rest House Krahr.

I really enjoyed this story and hope future Innkeeper stories might spinoff to Maud, Arland, Helen and House Krahr.

Many great scenes while Maud literally fights for begrudging respect, but I wanted to include Helen, who is as vicious a fighter as her mother.

“They asked me where I came from, and I told them about how I made my room and Aunt Dina said she would get me fishes. This boy said that houses can’t move if you think at them. He said I was lying.”

Of course he did. “Then what happened?”

“Then I got mad.” Helen bit her lip with her fangs. “And I said take it back. And he said I was stupid and a liar. And then he wagged his finger at me.”

Helen stuck out her hand wit her index finger extended and waived it around, drawing an upside-down U in the air, and sang, “Liar-liar-liar.”

“Then I said that pointing was bad, because it lets your enemy know where you’re looking.”

The lessons of Karhari had stuck. No matter how long Helen spent away from it, the wasteland had soaked into her soul and there wasn’t anything Maud could do about it.

“And he said I wasn’t good enough to be his enemy. And I said, ‘I’ll punch you so hard, you’ll swallow your teeth, worm.'”

Maud hid a groan. “Where did you hear that?”

Oh goodie. “Then what happened?”

“Then the scary old knight came and told me that if I challenged the boy, there would be ripper cushions.”

“Yes. So I asked if the boy would get repercushions if he fought me, and the knight said yes, and I said I was okay with it.”

Maud rubbed the bridge of her nose.

“And then the knight asked the boy if he wanted help and the boy said he didn’t, and the knight said ‘proceed’, and then the boy punched me, and I got his arm. With my legs.” Helen rolled on the floor and locked her legs together. “I said, say surrender, and he didn’t say anything, he just yelled, so I broke it. If he didn’t want me to break it, he should’ve said surrender.”

Maud rubbed her face some more.

Helen looked at her from the floor her big green eyes huge on her face. “He started it.”

And she finished it.

Helen looked at the floor.

“You knew you weren’t a liar.”

“So why did it matter what the vampire boy said?”

Maud crouched by her. “You don’t always meet enemies in battle. Sometimes you meet them during peace. They might even pretend to be your friends. Some of them will try to provoke you so they can see what you can do. You have to learn to wait and watch them until you figure out their weakness. The boy thought you were weak. If you let him keep thinking you were weak, you could’ve used it later. Remember what I told you about surprise?”

“Now the boy knows you’re strong,” Maud said. “It wasn’t wrong to show your strength. But in the future, you have to think carefully and decide if you want people to know your true strength or not.”

“Come on.” Maud offered her daughter her hand. Helen grasped her fingers and got up.

One response to “Audiobook Review: Sweep of the Blade by Ilona Andrews”