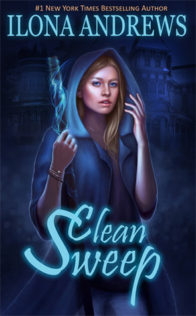 This story was certainly not as exciting as a Kate Daniels novel, but it was still a very enjoyable story with its own interesting world building.  The very premise of the story opens up the possibility for future stories and characters

Dina Demille is the innkeeper of the Gertrude Hunt.  This Inn is no ordinary Inn and if you’re human, you had best be finding a local Holiday Inn because Gertrude Hunt is not for you. Dina’s Inn caters to supernatural beings.  Of course, right now, she only has one guest who looks like a sweet elderly southern lady but just happens to be an intergalactic fugitive responsible for millions of dead, and quite possibly because she ate them all…with a little BBQ sauce.   But everyone knows that an Inn’s grounds are neutral territory and as long as she doesn’t leave the grounds, none of the bounty hunters looking to collect the multiple contract against her can do anything.  Such is an average day in the life of an innkeeper.

Dina helped her parents run their inn until one day, while Dina was off at college, her parents and their Inn just vanished.  Dina hopes to make such a success of her inn that eventually someone will come in and recognize her parents’ portrait and she might finally find out what happened to them.

But finding her parents is her future goal.  Right now she is desperately trying to make a success out of Gertrude Hunt, and the fact that there seems to be something dangerous hunting and killing the dogs in the neighborhood is not good for business.

Dina was hoping that Sean Evans, the werewolf who recently moved into the neighborhood  would do something about it, since he obviously claimed the territory and should feel the need to defend it, but merely suggesting it has turned Dina’s Inn into a battlefield of wills between Dina and Sean.

As an Innkeeper, Dina’s magic is tied to the inn and while she is on the grounds, she and the Inn can keep their guests safe.  Off of the grounds is another story but if Sean won’t defend the neighborhood, Dina might just need to step in and hope for the best.  When a battalion of Vampires parks their spaceship just outside of Earth’s atmosphere and several of their warriors, in full battle armor, come knocking on Dina’s door, this problem might just turn out to be much bigger than Dina anticipated.

THOUGHTS:
I once again went with audiobook on this one and the story was definitely easier to follow than the Kate Daniels series.  Only issue I had was that it is the same narrator so I had to keep reminding myself that it was a different story and not Kate narrating.

It is not as action-packed or as exciting as the Kate Daniels series, but I enjoyed the story and the introduction of the characters. The premise of a magical Inn for supernatural opens up any possibility of characters to be introduced and story lines to followed. It is more than just Earth supernaturals and also a suggestion that all supernatural come from outer space. There are portals to other planets and dimensions where guests can come from and they really do have creative license to create new creatures, cultures and abilities. There is a loose connection to The Edge series.

In this story, Sean Evans is a werewolf but apparently his parents didn’t tell him much about his people’s history, so through Dina’s introduction of the great big universe to Sean, we are given our beginning foundation to the world of the innkeeper chronicles.

I definitely found it entertaining and I want to see where Ilona plans to take the series in future stories. I also listened to the recently released book 2, Sweep in Peace, and we will talk about that one tomorrow.

In the orchard, twenty yards from the house, Sean Evans was urinating on my apple tree.

You’ve got to be kidding me.

“Stop that,” I hissed in a theatrical whisper.

He ignored me. His back was to me and he was still wearing the same jeans and gray T-shirt I’d seen him in that morning.

“Sean Evans! I see you. Stop marking your territory on my apple tree.”

“Don’t worry,” he said without turning. “It won’t hurt the apples.”

The nerve. “How would you know? You’ve probably never grown an apple tree in your entire life.”

He was handling it, all right. “What makes you think that marking things will have any effect? The dog killer ignored your marks before.”

“This is how it’s done,” he said. “There is a certain etiquette to these things. He challenged me, and now I’ll challenge him back.”

Beast barked once to add her support.

Sean zipped himself up, turned around, and took a running start at an oak tree. It was an incredible thing to watch: six feet away from the oak he leapt up and forward, bouncing off the bark upward to the spot where two large branches split from the trunk, pushed off them like he was weightless, landed on the branch stretching toward the balcony, ran along it until it thinned, and crouched. The whole thing took less than two seconds.

His eyes shone once with bright golden amber. His face had gained a dangerous sharpness, predatory and slightly feral. A shiver ran down my spine. No, not repressed. Not even a little bit.

A werewolf was bad news. Always. If I had met him on the street like this, I’d have started making soothing noises and thinking of exit strategies. But we were on my turf.

Beast let out a tiny snarl, astonished at the insult.

“She weighs what, about six, seven pounds? Now, I’m willing to concede that somewhere in the distant past one of her ancestors might have been a dog. But now she’s an oversized chinchilla.”

“She has little ponytails,” Sean said, nodding to the two tiny ponytails about the Shih Tzu’s eyes.

“Her fur gets in her eyes. She’s due for a grooming.

“Aha.” Sean tilted his head to the side. He seemed completely feral now. “You’re asking me to take a dog with two ponytails seriously.”

“I’m not asking you to do anything. I’m telling you: get off my property.”

He bared his teeth at me in a slightly deranged smile. He looked hungry. “Or what? You’ll hit me with your broom?”

He was within the inn’s boundary. I was clearly an innkeeper — the broom was a dead giveaway. Yet he showed no respect. I’d met some arrogant werewolves — when you were a highly effective killing machine, you tended to think the world was your oyster — but this one took the cake. “Go away, siri.” There. That would fix him.

No reaction to the insult. Either he had a bulletproof ego or he had no idea I’d just called him a sniveling coward in his own language.

One response to “Review: Clean Sweep by Ilona Andrews”