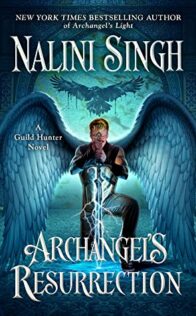 New York Times Bestselling author Nalini Singh takes us into the dangerous, haunting world of archangels…and a love that is legend.
For thousands of years, the passion between Alexander, Archangel of Persia, and Zanaya, Queen of the Nile, burned furious and bright, seemingly without end. But to be an archangel is to be bound to power violent and demanding. Driven by its primal energy, Alexander and Zanaya fought as fiercely as they loved. Locked in an endless cycle of devotion and heartbreak, it is only Zanaya’s decision to Sleep that ends their love story.
Eons later, it is the Cascade of Death that wakens them both. The passion between them a flame that yet burns, Alexander and Zanaya stand together in one last battle against the ultimate darkness. But even a warrior archangel cannot win every war. Alexander’s scream shatters the world as Zanaya falls, broken and silent…only to rise again in a miracle that may be a devastating curse. For is it truly the Queen of the Nile who has been resurrected?
Only one thing is clear: this is the last beat of their passionate, angry dance. The final song for Alexander and his Zani…

Love this series. Hated this book.

Alexander wasn’t one of my favorite characters so I wasn’t overly excited about this book to begin with and the relationship between Alexander and Zanaya was like watching a really bad reality TV series.

Alexander, Archangel of Persia, and Zanaya, Queen of the Nile, have a long history. They met the first time when Zanaya was just a young angel but Alexander was already a millennia old. They noticed each other right away and felt a connection, but it would have been like a twenty-five-year-old dating a kindergartener. So Alexander kept watch on Zanaya from afar, getting updates as the climbed the ranks in another Archangel’s soldiers. Even when she made Lieutenant, and she felt she was ready for a relationship, he wouldn’t indulge her for another few centuries.

When they finally began dating, what kept them from being a real couple was first the fact that Alexander was so much older and had been an Archangel for so long, that he was very used to everyone jumping when he snapped his fingers and Zanaya wasn’t willing to give in to him. This is especially true since Zanaya’s mother was abandoned by her father but would run back to him whenever he crooked his finger. Zanaya was determined never to bow to any man. This created a huge barrier towards their HEA.  As both of them felt that their dedication to the relationship wasn’t being matched by the other.

As far as the continuing story arc, we pick up just before the war in New York, seeing the fog to overtakes Lijuan’s territory and when she sent her zombie horde of children toward Neha’s lands, including that idiot archangel who knew better than everyone and flew into the cloud, only to be buried in the farthest reaches of the world so he could maybe have a chance to heal. Zanaya was then attacked and drained by Lijuan during the battle and her desiccated body was taken by Cassandra along with the other archangel’s who barely survived the attack. While the archangels still rested, Zanaya recovered rather quickly in less than a decade, but she felt changed by her attack. There is still a dark stain upon the world which was created by Lijuan and it keeps calling to Zanaya.

Thoughts:
Neither of these characters excited me but put them together and their relationship was a disaster. While I admire the fact that Alexander wouldn’t date Zanaya until she was a millennia old and she reached the rank of General, Zanaya and Alexander were a passionate and volatile couple. They are the kind of couple I would actively avoid in my life. They would be on a romantic high for awhile until they began to bicker about Alexander wanting Zanaya closer and more committed to Alexander and Zanaya wouldn’t submit to Alexander’s controlling nature. Both believed they were more committed to the relationship and they weren’t getting the same level of commitment back. They would argue and break up for decades or centuries at a time, and then get back together until the fighting began again. Come on, you know a couple like that, someone who breaks up and gets back together over and over again. It’s annoying to everyone but them. Zanaya’s biggest offense to Alexander was deciding to go to Sleep and she was upset that Alexander refused to relinquish power long enough to Sleep although he was past the time he should have gone to Sleep and was acting erratic. We know that he eventually gave in since he was awakened in Nasir’s story but he had to once again destroy his relationship with Zanaya before he gave in. You could see how jealous Zanaya was of the bond between Raphael and Elena especially since they had only been together for a moment in angel terms.

The story builds from before the war and through the battle, and can really all that can be skipped as we didn’t learn anything new.  We just saw it from another pair of eyes.   It is the last 20 percent of the book where we pick up the battle between Zanaya and the darkness which is calling out to her.

While there was some interest in seeing Raphael’s mother and the Hummingbird being treated as a contemporary to Alexander and Zanaya as opposed to the mother-figures we are used to, there really wasn’t much to this story to excite me and if you feel the way I do about Alexander, you could probably just pass this one entirely as we had little time with our favorite characters and not much to push the story arc forward. 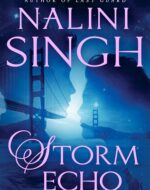