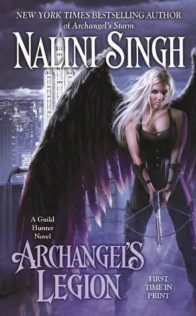 Angels are falling from the sky in New York, struck down by a vicious, unknown force.

Vampires are dying impossibly of disease.

Guild hunter Elena Deveraux and the Archangel Raphael must discover the source of the wave of death before it engulfs their city and their people, leaving New York a ruin and Raphael’s Tower under siege by enemy archangels.

Yet even as they fight desperately to save the city, an even darker force is stirring, its chill eyes trained on New York…and on Raphael. Rivers of crimson and nightmares given flesh, the world will never again be the same.

In Nalini Singh’s world of Archangels, these Archangel’s aren’t saints. The Archangels are the most powerful beings and they rule over the earth and the angels, vampires and humans who live there. They have divided the earth into territories, but there are constant power struggles between the Archangels. Over a millennia old, Raphael is one of the youngest and most powerful Archangels who rules over the most prized territory from up high in his Tower which dominates the New York City skyline.

After Raphael’s mother, Caliane, a truly Ancient Archangel, woke from her millennia of sleep, she began a Cascade which effects the natural order of the world causing changes in weather and worse, granting new, dangerous powers to the Archangels.

A strange cloud covers New York City and angels and birds start falling from the sky. On the day forever known as the Falling, over 800 of Raphael’s defensive force lies broken on the streets.

When vampires start dying from some strange pox which is being passed through blood, and the Hudson River turns blood red, Raphael and Elena don’t know if this all part of the Cascade or if an Archangel has turned their eye towards Raphael’s prized territory.

Raphael will find out who his true allies are as he rallies his remaining forces to protect the City for a possible invasion, but if this is all part of the Cascade, there might not be an army large enough to save New York from destruction.

THOUGHTS:
This is the most exciting and intrigue story in the series so far. Although most of the stories have dealt with the power struggles between Archangels, this one contained a great build up of the story with the question of whether this was an attack or the new natural order of things and if it was an attack, Raphael’s forces were severely depleted, could he truly hold off a frontal assault at this point?

In general, this is a darker series than Singh’s psy-changelings. Raphael is a very powerful Archangel and even when he first met Elena, he had lost any respect for mere humans. Their lives were too short to be of any concern to him. Although he still has a very cold side to him, his time with and love for Elena (former human and guild hunter, now angel) has given him a depth of character.

As we watch disaster after disaster attack New York and Raphael’s people, we are also trying to determine if this is a subsequence of the rising of the ancient archangel or an act of war. There are few Archangels who are old enough to remember the last Cascade and not enough records to verify if this is only the beginning of the end of the world.

With the beginning of the Cascade, all of the Archangels began receiving new powers. Raphael obtained the ability to heal others with a touch as well as create deadly wildfire. But the power struggle between Archangels makes them cautious and Raphael hasn’t been able to determine just what powers the others might have been granted and whether or not the damage befalling New York is due to the Cascade or an act of war.

It was an exhilarating, heart pounding story that doesn’t let up until the very end.

“Anything from Aodhan?” she said, when Raphael came alongside.

“No, the city has been quiet since we–” He paused, his eyes locked on the Hudson.

“What is it?” It appeared as it always did to her, but she knew he had the piercing eyesight of a bird of prey.

The water began to crash and froth even as he spoke. Managing to hover beside Raphael as he halted at the river’s edge, Elena glanced to the right…and that was when she saw it, the wave of red. Rich and dark, it rolled down the river in an eerie tide that made the hairs rise on the back of her neck, the scent of living iron pungent in the air. “Is that blood?”

“There’s only one way to find out.” He swept down to the water, hovering lower than she could manage with her current wing strength, until his fingertips skimmed the red stain.

Bringing his fingers to his nose, he shook off the wet and rose to her side. “Blood,” he confirmed. “But it’s weakening.”

As they watched, the water turned rose red, then pink, then blush, until it was the murky brown of a churned-up Hudson again, the unmistakable scent gone as if it had never existed. That was when the snow began to fall, airy flakes that whispered over her wings and face to settle on the city, a caress of whiteness to erase the blood.

“What we just saw”–she stared at the water–“should’ve been impossible.”

“Did Jessamy not say something about blood raining from the skies during the Cascade? This would seem to fall along the same continuum.”

“And the archangels were not who they should be, and bodies rotted in the streets and blood rained from the skies as empires burned.“

“Jesus, Raphael,” Elena said, as the historian’s words rang in her mind, “this is really happening.” And it wasn’t just going to be a war. “It’s going to be an event that changes the face of our world.” Her brain could barely comprehend the scale of what was coming.

Raphael’s eyes met hers, the snow continuing to drift from a crystalline sky. “In the hours I spent with Caliane, she told me more of the last Cascade.” Shadows of terrible darkness in the intense, impossible blue of his eyes.

“I almost don’t want to know,” she whispered, all the while aware this was a truth that couldn’t be avoided.

Her archangel angled his wings toward the Tower, and she did a wider sweep to follow. “You are consort to an archangel. You no longer have a choice.”