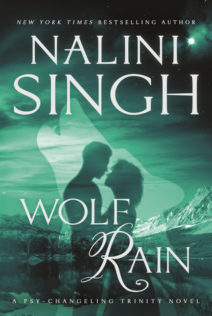 The end of Silence was supposed to create a better world for future generations. But trust is broken, and the alliance between Psy, Changeling, and human is thin. The problems that led to Silence are back in full force. Because Silence fixed nothing, just hid the problems.

This time, the Psy have to find a real answer to their problems–if one exists. Or their race will soon go extinct in a cascade of violence. The answer begins with an empath who is attuned to monsters–and who is going to charm a wolf into loving her despite his own demons.

Another amazing story from Nalini Singh.

Memory and Alexi couldn’t be more of an odd couple yet they couldn’t be more perfect for each other. Alexi is a Senior Lieutenant of the Snow Dancer pack. He is on patrol on the edge of Snow Dancer territory when he feels waves of grieving and pain coming from the oddest direction. Knowing that the psy had once trespassed on Snow Dancer territory thinking they were outsmarting the wolves, Alexi keeps following the odd sensation until he comes upon a trap door wedged into a small cave. When he pries it open, he finds a small bunker and Memory crying over her cat who has died of old age.

It turns out that Memory was abducted as a child by a psychotic psy with TK abilities who knew about the secret bunker. She has been kept there for years with the cat as her only companion and television as her only window to the outside world. It doesn’t take much for Alexi to convince Memory to leave the bunker with him before her captor returns and teleports her away.

Until he knows it is safe, Alexi can’t return to the den so he takes her to one of the outposts to get her some food and clean clothes.  He also needs to contact Hawk about what to do next since Memory is clearly an Empath but her abilities are much different than those of Sasha or Ivy, something that makes a psychopath crave more and more.

As Memory is introduced to the Empaths and makes a home in their training compound, she gets a taste of freedom for the first time. But her wolfie savior wants to make sure that her growing attachment isn’t just because he gave her her freedom, and as Memory grows more confident, she is frustrated by Alexi’s pulling away. So she is going to show that wolf that she is tired of playing games and she is ready to embrace this new life without walls but she wants her wolf by her side.

But Memory’s captor isn’t ready to let go of the high he gets from Memory and while Memory is dodging his searches, someone else wants to stop the E’s from building their honeycomb over the psynet and the E’s will be attacked where they least expect it — from within their own ranks.

Nalini Singh once again weaves her magic bringing us romance and excitement in her special world of changelings and psy.

My only concern is that when characters insist that it is time to tell their story, such as Alexi, we are forgetting that the very fragile psynet needs human bondings to help heal it. My guy, Kaleb, states that the psynet will fail in the next 12 months unless more non-psy bond with psy and help support the psynet but the only human in a story lately was Bowen Knight and he mated with a changeling. The clock is ticking and if we don’t get a psy-human romance soon, it will be too late to save the psy.   And we didn’t even deal with any of the larger conspiracies in this story regarding the consortium. There was already so much going on.

I am looking forward to seeing what comes next and how Nalini plans to pull the psy back from near extinction.

She made herself get to know the other Arrows, too, as well as her fellow empaths–and even the leopard and wolf soldiers who swung by the compound every so often on their patrol routes. She had to understand her own heart, had to know if the fact she dreamed of Alexei night after night was more than a thing of happenstance.

In those dreams, she felt the hard muscle of his body against her, shivered at the rasp of his stubble, gasped when he bit her. Each morning she woke frustrated and alone, she glared another hole in her mental photograph of a certain golden wolf. When one day, she opened her door and found a small sealed box outside.

Eyes narrowed, she scanned the dawn-quiet compound, but found no grouchy wolf hanging around. She took the box inside before opening it…to find it full of granola bars. Dark cherry with white chocolate. Salted caramel and almonds. Apricot and mango. Walnuts with nougat.

Memory emptied out the box, but there was no note. Not that she needed one.

Scowling, she put all the bars back in the box. Then, at mid-morning, she took the box around the entire compound, offering the bars to the other Es, the Arrows, and especially a couple of SnowDancers who’d dropped by The dark-haired one, whe’d introduced himself as Riaz, accepted a bar with a gleam in his eye, and she knew he’d scented Alexei all over the box.

The obstinate, crabby wolf who’d rescued Memory and then rejected her left her a full-sized apple pie the next morning. In a warmer.

Memory fed it to an ecstatic bunch of empaths.

Two days later, she woke to a basket of exotic fruit.

Those she gave to Yuri, to share with the children at the Arrow squad’s own compound.

Then came the single-serving-sized blueberry cake with her name written on it in white icing that glittered with sparkles. It hurt her heart, it was so pretty. She wanted desperately to keep it.

She set her jaw; Alexei didn’t get to look after her when he’d walked away from her and stayed away.

Picking up the small cake box, she headed outside.

No one would take it off her hands. Her fellow trainees fought not to laugh as they waved it off with cobbled-together excuses about expanding waistlines and newborn allergies to blueberries, while Jaya bit down hard on her lower lip and pressed a hand to her heart. “oh, Memory. That’s so sweet.”

“Hah!” Alexei wasn’t being sweet; he was just trying to win their silent battle.

Giving up on romantic Jaya–who was convinced the damn wolf’s feelings would be hurt if anyone but Memory ate the cake–Memory went to the most clear-eye and practical people in the compound. But the Arrows solemnly stated that they didn’t wish to start a war with SnowDancer.

“Very funny,” Memory muttered to a stone-faced Yuri before heading toward her next target.

Riaz, his hair rumpled from his run, took one look at the cake she thrust out under his nose and whistled, “What’d Lexie do to make you this mad?”

“Do you want it or not?” Memory tapped her foot.

“While the woman I love and adore would find it highly amusing if I ate that, Lexie would tie my intestines into knots.”

“Ugh!” Stomping back to her cabin, Memory slammed the door shut behind her. Then she put the lovely little cake box in the center of the table and, hands fisted on her hips, stared at it. She was going to have to eat it. Wasting food was beyond her. And such a lovely confection of a cake?

No way she would throw it away. But she wasn’t going to take this lying down.

Hauling her door open, she saw Riaz finishing up a conversation with Yuri. “Riaz!”

The wolf glanced over, one eyebrow raised.