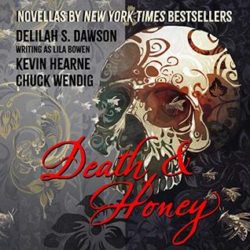 In The Buzz Kill by Kevin Hearne, Oberon the Irish wolfhound and Starbuck the Boston Terrier sink their teeth into a new Meaty Mystery when they discover a body underneath a beehive in Tasmania. It's been badly stung, but the bees aren't at fault: This is homicide. The hounds recruit the help of their Druid, Atticus O'Sullivan, and the Tasmanian police to track down the killer in the interest of a reward—but this time, they want more than food and justice.

Grist of Bees, by Delilah S. Dawson writing as Lila Bowen, follows Rhett Walker, who has given up his destiny as the monster-hunting Shadow to settle down with his beloved Sam. But when the call to action grows too strong, Rhett saddles up to follow a peculiar bee into the unforgiving desert. The bee leads him to a weeping mother in a strangely prosperous valley, and Rhett has no choice but to hunt the creature that's stolen her child—even if it destroys a land of milk and honey.

Interlude: Tanager by Chuck Wendig returns us to the world of Miriam Black. Lauren “Wren” Martin is a young psychic woman who can see the stained souls of killers; it is her gift, or as she sees it, her curse. And up until now, it has been her mission to kill those killers, to remove them from the pattern so that they may not murder again. But now, after a death that may not have been deserved, she's left rudderless, without plan or purpose, until a woman with a strange power of her own takes her in and gives her a new mission—and a new target.

An interesting anthology which seems to be post-conclusion stories.

In Death and Honey, each story has a central theme of Death and Honey. I know, you probably could have figured that out without me. It also appears to feature characters whose stories have concluded already and it gives us a chance to revisit a world which we lost.

The Buzz Kill: I am a fan of Kevin Hearne and his Iron Druid Chronicles, so this novella which is technically part of the Oberon’s Meaty Mysteries was a must for me. Last year, we saw the end of the Iron Druid Series and our hero Atticus O’Sullivan. At the end of Scourged, he was left in Tazmania with the job of healing the Tazmania Devils. His dogs, Oberon and Starbuck, found a body under a wild beehive and call out to Atticus.

But a simple investigation shows that it wasn’t bee stings that killed him. Atticus, in his guise as a dog trainer, uses the intelligence and keen senses of his hounds to work with the local police to find the killer.

While I was happy to be back with Atticus and Oberon, all I can really say was that it was an interesting story. Atticus is still wounded post-Ragnarok and he is fighting a bit of a depression so it all made me kind of sad. There was a comment that the Detective he was working on as looking longingly at the wild beehive and I started to wonder if we would find out she was a honey badger shifter. There were werewolves and later on some bear shifters that showed up in the Iron Druid Chronicles (not a lot of shifters), but it turned out that she was not.

In a Grist of Bees by Delilah Dawson, she catches up with monster hunter Rhett Walker. He is an interesting character who has now retired from monster hunting and settled down with his boyfriend to do some farming. It has been about four years and Rhett is mostly happy with where is life has gone. While finishing up for the day, a bee shows up and makes him follow (like a buzzing lassie) and he finds a woman crying. The Oracle’s handmaidens have come down off the mountain and taken her daughter. The monster hunter inside is prodding Rhett to help so he promises to retrieve the little girl.

Rhett encounters a few of his old friends and enemies along his journey as well as several monsters which need to be taken care of with his six-shooter.

This was an interesting story and I was able to following along even thought I didn’t know the series. I thought it had an interesting feel of the old, wild west monster-hunter and unusually as Rhett was obviously gay and had to deal with prejudices as well as monsters. While I could follow along with this short story, even without knowing all the backstory, it didn’t grab me enough that I need to go grab all the books in the series and start from the beginning.

I didn’t get to the final story by Chuck Wendig simply because I decided to move on to my other downloads.