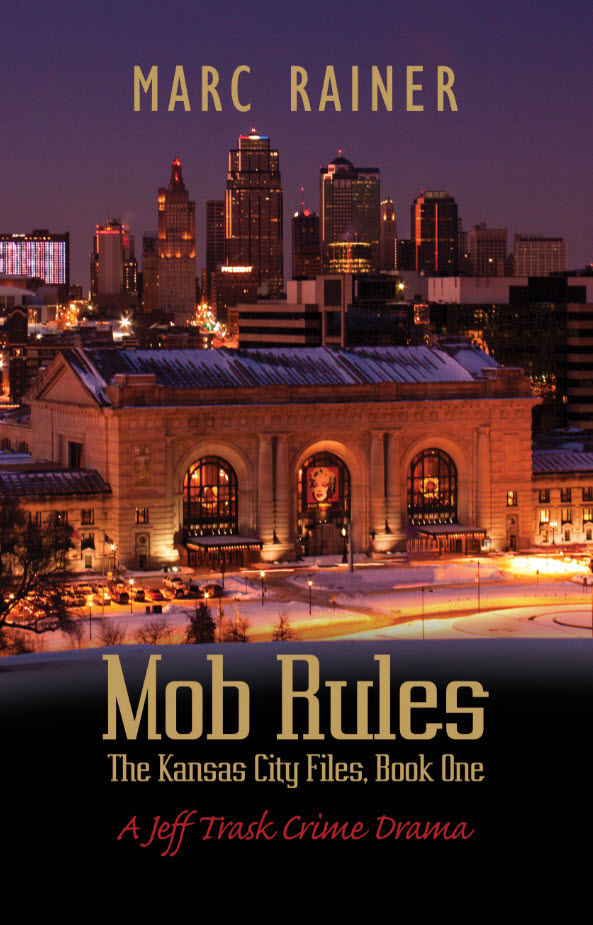 For those who love Law & Order, the Jeff Trask Crime Dramas are just what you need to satisfy your inner investigator. It has the perfect fusion of crime and courtroom drama.

Former Federal Prosecutor Charles Ambrose, writing under the pen name of Marc Rainer, has a dynamic way of blending his true life trial experiences with the fictional world of Jeff Trask to amp up the excitement of criminal investigation. He even notes at the end of the story which scenes were taken directly from reality and proves the old adage that truth is stranger than fiction. This includes the scene below and the opening scene on an airplane flight with a suspected drug dealer among the passengers. Scenes which might have appeared to be over the top turned out to be part of actual events.

These stories have an excellent mixture of the investigation and prosecution which details what truly goes into finding the criminals, determining guilt and then establishing that guilt in a way which would allow the prosecutors to obtain a verdict and a sentencing in a court of law.

I had forgotten that at the end of Death Votes Last that our main character, Jeff Trask, had resigned from the Federal Prosecutor’s office after having enough of Washington D.C. It was not until we joined Jeff in this story on the way to his job interview in Kansas City that I recalled that change in the storyline. So Mob Rules is actual more of a spin-off of the original Jeff Trask Criminal Investigation series and is now The Kansas City Files. I had a moment of disappointment because I enjoy stories when we build our investigative team over the course of the books and we left our team behind in Washington. But as Jeff joins the Kansas City US Attorney’s Office as their new Senior Litigation Counsel, he joins a new task force including Federal and local investigators and we quickly get to know our new team who all work together to capture criminals, instead of the usually stories of pissing matches between local and federal investigations.   It will take time to get to know all the new players but the story had a great dynamic between this new group already.

Right from the start, Jeff is brought in to head the task force to go up against the local mob family. The local mafioso have appeared to turn away from their usual endeavors and opened juice bars which feature nude dances. Since there is no alcohol, investigators have no excuses for coming in and keeping tabs on these bars the way they would if they needed license to distribute alcohol.   So the mob is free to cook their books and conduct other business behind their closed doors.  Yet there is word that some of the junior mobsters are becoming entrepreneurs and dealing drugs for extra income. As if supplying heroin to the young and desperate for Kansas City isn’t bad enough, this heroin in laced with fentanyl and people are dying.

Jeff and the task force need to do more than know where the drugs are, they need to follow the trail all the way from supplier to distributors and collect the evidence to prove that guilt to a jury. Jeff and his team aren’t the only ones the dealers need to worry about either. On one hand, we have a local woman who lost her only son to this deadly laced drug and she wants to make the mob pay for their crimes. On the other hand, the local Don is very happy with the profits for his juice bars and he doesn’t want anyone to mess up his good thing with something that would bring cops sniffing around. He also wouldn’t be happy to find out that those dealers weren’t kicking their profits up the chain into his pocket like they are supposed to.

Jeff and his team working hard to follow the drugs but they need to hurry and finish their investigation and lock down their evidence before someone else gets to their drug dealers before they do. This story was tension filled wondering if Jeff would take down the drug ring before someone else would take them out.

I really enjoy the Jeff Trask Crime Drama series and am looking forward to seeing what other investigations the Kansas City Files will bring to the table.

FBI Special Agents Henderson, Foote, Furay, and Detective Velasco sat in a semi-circle of folding chairs on the top floor of the building housing the Kansas City Division of the Federal Bureau of Investigation. Pointing out the window, across the Kansas-Missouri state line and the interstate—and toward the house used on occasions such as this by the Dellums twins—was a telescope which fed one video feed to one of two television monitors that sat on a folding table in front of them. A second TV monitor to the right was displaying the video transmitted by the FBI’s bug from inside the Dellums house’s living room. Each video feed was also being digitally recorded.

The first monitor showed the area outside the front of the house. There was one vehicle parked in the driveway.

“How long have they been in there, Drew?” Furay asked Henderson.

“They arrived about four-thirty,” Henderson said. “Must have taken some personal time.”

“Time to get stoned as hell,” Foote remarked. “I can barely see across the room for all the damned smoke.”

“Just be glad you didn’t have to smell it,” Henderson said.

They all watched as Jamarcus Dellums rolled anther sizable joint from the loose pile of marijuana leaves spread across the coffee table in front of the couch.

“More like a marijuana cigar,” Foote said. “How do these clowns make any money moving the other crap if they’re this high?” he asked Velasco.

“Beats me. That’s probably some of the high-grade, hydroponic, ‘medicinal’ weed we’re seeing coming in from Colorado,” Velasco said. “Our weed dealers are getting rich going to Denver and stocking up. They come back here and sell it with a 100% mark-up. It’s a lot more potent than the usual ditch weed. It has almost three times the THC content.”

“I thought that marijuana was illegal under federal law,” Henderson quipped.

“Only where there’s a will to enforce that law,” Furay observed. He pointed toward the monitor on the left. “Looks like somebody just pulled up.”

“Welcome back, Delroy,” Velasco said. “We should see some action now.”

They watched the right monitor as Delroy Dellums got out of his car and walked to the front door. They shifted their gazes to the right monitor and watched him enter the living room, a small duffel bag in his left hand. To their collective dismay, he just put the duffel on the coffee table beside the pile of marijuana.

And smoke they did. The pile of loose leaves on the table grew smaller and smaller.

“It’s been an hour since he got there,” Furay said, looking at Velasco.

“That’s a whole I.Q. point,” Foote quipped. “And we’re across the state line.”

Moving slowly and somewhat clumsily after their smoking session, all three of the men in the room pulled plastic gloves and paper masks from their pockets and put them on. Rather than attempt to unwrap the layers of tape and plastic, Jasper just took a box cutter from his pocket and slit the first package from corner to corner. A spoon and a small digital scale were then used to weigh gram quantities of the white powder inside the package, and these tiny piles were then scraped into very small zip-loc bags using a razor blade. The process was tedious and time consuming, and it was made even slower by stoners who had lost both their coordination and any sense of time. After filling a few baggies, Jasper pointed to his twin Jamarcus as if to signal that it was his turn. Jamarcus switched seats with Jasper and began his shift.

Delroy Dellums crossed the room from his chair next to the couch and switched on the television in the living room. The screen flickered to life. Displayed on the screen, much to the collective horror of the investigators watching a quarter-mile away, was the exact same scene that they were seeing on their monitors across the highway. The Dellums looked at their television and saw themselves looking at their television.

Henderson shrugged, the palms of his hands rising toward the ceiling.

Jasper Dellums grabbed a cheap throw that had been hanging on the back of the couch behind him. He stumbled across the room toward his television and draped the throw so that it covered the television screen. He then turned back toward his cousin and brother and made a motion with his hands indicating that the problem had been solved. He then went back to helping with the measuring and weighing of the heroin.

Foote fell out of his chair laughing. Furay was still giving Henderson “the look.” Henderson was babbling about why this couldn’t have happened. Velasco was just staring at the monitor, his mouth open.

“I can’t believe this shit,” he finally said.

Foote finally caught his breath and climbed back onto his chair.

“Welcome to the ’Dotte,” he said. He laughed again. “And to Drew-vision.”

That broke them all up again, including Henderson.

“What the hell happened there, Drew?” Furay demanded after catching his breath.

Henderson just shrugged again. “I have no idea. The frequency of the channel they were tuned to must have been too close to ours.”

“I know one thing,” Foote roared. “I now favor the legalization of pot. Maybe those idiots will sell me some. I think I’ll go over there and ask them.”