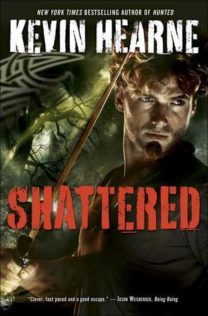 For nearly two thousand years, only one Druid has walked the Earth—Atticus O’Sullivan, the Iron Druid, whose sharp wit and sharp sword have kept him alive as he’s been pursued by a pantheon of hostile deities. Now he’s got company.

Atticus’s apprentice Granuaile is at last a full Druid herself. What’s more, Atticus has defrosted an archdruid long ago frozen in time, a father figure (of sorts) who now goes by the modern equivalent of his old Irish name: Owen Kennedy.

And Owen has some catching up to do.

Atticus takes pleasure in the role reversal, as the student is now the teacher. Between busting Atticus’s chops and trying to fathom a cell phone, Owen must also learn English. For Atticus, the jury’s still out on whether the wily old coot will be an asset in the epic battle with Norse god Loki—or merely a pain in the arse.

But Atticus isn’t the only one with daddy issues. Granuaile faces a great challenge: to exorcise a sorcerer’s spirit that is possessing her father in India. Even with the help of the witch Laksha, Granuaile may be facing a crushing defeat.

As the trio of Druids deals with pestilence-spreading demons, bacon-loving yeti, fierce flying foxes, and frenzied Fae, they’re hoping that this time, three’s a charm.

It is time to meet Atticus’s archdruid, Owen Kennedy and life will never be the same.

We have already met Eoghan O’Cinneide (Anglicized as Owen Kennedy) several times throughout the series but he appears as musings from Atticus’s past usually saying “Don’t cock it up, Siodhachan.” Owen is Atticus’s archdruid and 2,000 years ago the Morrigan foresaw that Atticus would need Owen’s help in the future so she convinced Owen to allow her to put him on a time island in Tír na nóg.  It wouldn’t have been hard to convince him since Owen was in his 70’s in a time when 70 was absolutely ancient and he was beginning to suffer the ravages of age.   Realizing his days were numbered anyway, Owen agreed to go along with the Morrigan’s plan, which included him being removed from the island when the Morrigan died which would have appeared an unlikely event.

The student is now the teacher as Atticus has to teach Owen everything from English to the last 2000 years of history, including all that Atticus has learned since he was a young druid.  Owen takes to some modern conveniences (indoor plumbing) better than others (what the frek is a cell phone).   Atticus also introduces Owen to his Immorali-Tea and after more than a pot, Owen is returned to a man in his 40’s.  Of course, as a little payback to his harsh taskmaster, Atticus neglects to mention that diuretic properties of just a cup of tea, let alone the whole pot — before he introduces Owen to indoor plumbing.

I introduced this series to a co-worker and every morning he would walk in with another great scene with Oberon, and each time I told him simply “you haven’t met Owen yet.”   Then one morning he quotes part of the below scene, and declared how much he loved Owen.  I smiled because I knew he would. 🙂

This is the first story  where Granuaille, who is now a full druid, and Atticus split up.  While Atticus deals with Owen, Granuaille receives a call from Laksha Kulasekaran that her archaeologist father is in India and has been taken over by a demon spirit. The demon appears to be infecting the locals with a plague which is simply more demon possessions.  Granuaille shifts to India to work with Laksha to free her father from the demon.  As if fighting demons isn’t enough for the young druid, Loki takes the opportunity presented to mark Granuaille so he can divine her location back to Atticus.   Now Granuaille must decide whether she stays away from Atticus or does she find a way to remove Loki’s mark.

In Hunted, Atticus becomes convinced that someone was helping the Diana and Artimus on their hunt for Atticus and Granuaille, and in looked like someone in Tír na nóg was working to take the druids out.  He goes to Tír na nóg to find proof and finds much more than he bargained for including an all out war with the fae.

While I hate to see Granuaille and Atticus being split up, it kept the action going with more than one plot going.   Owen is a great addition to the group bringing in the interesting fish out of water aspect but still bringing his decades of experience as a druid.   Owen will also be introducing his wealth of experience to a new generation of druids.

After 2000 years of being the only druid, Atticus will now have a new family of druids to work with and continue the work.

This is such a great series and Owen is not a character to be missed.

Great works as always by narrator Luke Daniels in bringing this series to life.

Atticus takes his old archdruid off the time island and to a pub for the first time.

We talked through a couple more rounds and the after-dinner crowd started to filter in. Owen became particularly animated at one point and this amused some young toughs at the bar. They laughed and one of them aped him. An astoundingly poor decision which meant that his night of fun with his mates was about to turn into the night he got his ass kicked.

“Shut your hole, you.” Owen growled at him. It was in old Irish but the tone was unmistakable.

The grin disappeared from the punk’s face and he put down his drink and did that jaw flexing thing that some guys do because they think it makes them look tougher.

“Are you talking to me, old man?” In the punk’s experience, that was the point where most people backed down. He left room for Own to say “my mistake,” and look away, and he thought that that would be the end of it, but my archdruid wasn’t the average senior citizen. He knew a challenge when he heard it and he had never refused to accept one.

Keeping his eyes on the punk, and sneering the entire way through his next words, he said, “Siodhachan, tell him ‘his mother makes badger noises when I tup her sideways.'”

I grinned, but elected not to translate. There was no need. There was plenty of offense to be taken from Owen’s body language and voice and the punk was happy to take it. He balled his hands into fists and approached the table.

“Look, old man, if you want trouble, I’ve plenty to give you.” He raised a fist and pointed at Owen when he got near. “In fact…”

That was it. Owen grabbed his arm, yanked it toward him and head-butted the punk. He went down with a yelp and Owen stood up, kicking his chair away behind him.

The inn got quiet, the way things will when shit gets real. The punk had four friends at the bar that had just seen him lose in less a second to a man who looked to be more than 70 and unable to pay for his drink. For a brief moment they had a choice regarding their mate: they could laugh at him, and give him unending grief about it for the rest of his life, or they could back him up. Owen wasn’t going to let them get a laugh out of it. He kicked the punk in the gut and beckoned the others forward.

“Come on and have your lesson then,” he said.

And though they didn’t speak old Irish, his meaning was unambiguous. The dinosaur wanted a fight. And the huge grin on my face probably didn’t help matters.

“Now wait, boys,” the bartender said. But they all put down their drinks and rushed Owen. Pride and brotherhood wouldn’t allow them any other choice.

I didn’t move but muttered words to boost my strength and speed in case they decided to involve me.

The first one came in with the intent to tackle Owen to the ground. The better to pummel him into submission. It wouldn’t work out well. The archdruid used to have us charge him in just such a fashion for training, because it was a common tactic in unarmed combat.

Owen fainted to his right, causing the punk to veer that way, then hopped left, slapping the outstretched right arm away to ensure he passed by. Pivoting as the poor bloke chugged past and keeping his fists near his sternum, the archdruid delivered a blow with his left elbow to the lad’s temple and then kept spinning around, taking the charge of the next guy in the back and stunning him with a right elbow to his guts. The punk stopped, bent over and Owen raised his right arm again, still cocked, and completed his turn. This time giving the man an elbow to the jaw. He lost some teeth on the way down to the floor.

The third bloke slowed down, deciding to search for a weakness, and the fourth chose to have a go at me, even though I had sword plainly slung across my back. He came at me from my left side, fist cocked, and I waited for him to throw it at me, once he did, I caught it in my left hand and took my cue from Owen. I head-butted him using his own momentum against him. I smashed his nose and let him go down cradling his face.

The last guy rarely behaves as tough as he had with his mates still standing around him. Morale evaporates rapidly when you encounter something that’s able to take our your friends in a few seconds. He held up his hands and backed off.

“What’s happened to all his piss, Siodhachan? He charged me and now he’s thinking better of it?” Owen said.

“Wouldn’t you in his position?”

“I might think about fighting another day, sure. But only after I learned how to fight. These were hardly any fun.”