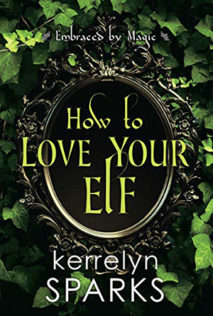 Raised in isolation on the magic-shrouded Isle of the Moon, five girls became five sisters. Now women, they are ready to claim their places in the world—and perhaps change it forever . . .

FLAME AND FORTUNE
Sorcha knew the mission was dangerous. Leaving the safe grounds of her brother’s kingdom and parlaying with the elves across their border . . . well, treachery seemed at least as likely as true peace. But to support her sister, Sorcha would brave far more than the underhanded ways of the elves. Or so she thought, before she was taken hostage.
Of course, her captors didn’t count on her particular abilities—or on the help of the Woodsman, the mysterious thief who made his home in the forest. He saw the battle from the trees, saw the soldier attacking against incredible odds to save a comrade—and then saw the valiant fighter revealed as Princess Sorcha of Norveshka. He can’t tell if he wants to kidnap her or kiss her. But despite Sorcha’s stubbornness, his inconvenient honor, and a rebellion on the cusp of full war, something burns between them that neither can let go . . .

Kerrelyn Sparks once again delights us with a story filled with adventure, treachery, magic and romance.

For those unfamiliar with the fantasy series, it focuses on five sisters-of-the-heart who were all sent to live in a convent off the mainland as babies for their own protection. These five girls were all Embraced, born on a day when the twin moons crossed each other or Embrace. The ruling Church of the Light deemed that these Embraced and often magically-gifted children were a danger to the populous (or their seat of power) and ordered them to be killed.

The Kingdoms on the mainland were fighting each other for decades until in the last three stories we find that the girls were each hidden by their Ruler father and were actually Princesses. Now they and their husbands rule their Kingdoms with fairness and love and are forging a time of peace between all the people of their adjoining Kingdoms.

How to Love You Elf brings us to the final warring Elf Kingdom of Woodwyn. The Elves have mindlessly been attacking the other kingdoms for years, especially the neighboring kingdom of Norveshki, where we find the dragon shifters. In the last book, we find that (now) Queen Gwennore is part-Norveshki and part-Woodwyn. Her Elven mother still lives and wants to meet her daughter who was sent away as a baby by her evil father. She wants Gwennore to cross over the border into Woodwyn but suspecting a trap, were ready before it sprang. But when her friend, Aleksi was wounded Princess Sorcha stayed behind to protect him and they are captured by the elven army.

A thief known only as the Woodsman helps them escape and keeps Sorcha and Aleksi safe but the longer Sorcha travels with him, the more she is confused. It seems that the River Elves are not only attacking the neighboring kingdoms, but their own people (mostly Wood Elves) and the armies steal food from their own people, burning their villages if they don’t comply. What kind of Leader would attack their own citizens? Was the ailing Elven King really evil or is it Gwennore’s mother who is behind this treatment? Why is the Woodsman mounting what looks like a coup against the King? And why won’t he let her or her sisters and their Kingdoms help?

In this series, the elves have been pointlessly attacking all of the Kingdoms which surround them. They don’t steal anything. They aren’t trying to grab lands. They attack, the kill and then go back home. None of it made any sense. But it does make everyone on the mainland hate elves, Gwennore dealt with a lot of prejudice when she first arrived at Norveshki because of her half-elven blood. When Sorcha first is saved by the Woodsman, she disparages the Elves as two-faced, lying bastards, not knowing that he is an elf because he doesn’t have the white-blonde hair of the River Elves. No one has traveled to Woodwyn in decades and since the army is made up mostly of River Elves, as Wood Elves are treated as lesser citizens in their own land, they weren’t aware that there was anyone living in Woodwyn besides the blonde elves.

While they have a rough start in gaining trust, attraction was never a problem between Sorcha and the Woodsman (and no, you don’t get a name besides Woodsman for about 75% of the story). Sorcha fights her attraction since the Telling Stones indicated that her love would be an lavender-eyed Elf with white-blond hair but the Woodsman won’t be deterred. Don’t worry, as Sorcha begins the soften towards the Woodsman and says to Hell with the Telling Stones, Aleksi is there like a bucket of water to keep our lovers from getting too close.   Sorcha may be descended from dragon shifters, but she is not much of a fighter.  Yet Sorcha loves with her whole heart and as she embraces the Woodsman’s people into her life, she bravely fights besides these Elves against the armies of the River Elves.

I know what you are thinking, four kingdom/four sisters everyone has a happy ending, what about little Maeve. Well we know that Maeve and Brody have that I hate you but really secretly love you thing going on and uniting all the Kingdoms isn’t the ends since the Circle of Five (made up of those who have lost their power when the Kingdoms united, as well as The Chameleon, who can shift and become anyone), they wants all the Kingdoms to bow to them. There is still much more story to tell and I can’t wait to see what Kerrelyn has in store for the conclusion.

I can’t imagine what St. Martin’s Press was thinking when they decided to drop this series after the third book. Let’s start with, who didn’t read the intro of the first book which said there were five sisters and therefore the story ARC would include five romances? Did they never read a romantic fantasy series?  Why contract for a series and stop after a trilogy?  Kerrelyn Sparks is a talented author with a strong fan base who love her storytelling. Sorry SMP but your failed on this decision. Kudos to Kensington for seeing this little gem dropped on the ground, picking it up and running with it.

The Woodsman dismounted and, facing the opening, he lifted his hands and brought them together. The underbrush rose back up. The branches moved together, interlacing until the thick wall was back in place.

“That’s incredible,” Sorcha said softly in the quiet stillness of the forest. “How do you do it?”

He gave her a wry look as he nabbed the reins of his horse. “Woodsman.”

She rolled her eye. There he goes again. “That doesn’t explain anything. Why is your gift with wood?”

He shrugged, then headed down the path, leading his horse. “Why is your gift with fire?”

“In my case, it makes sense,” she said as she walked beside him. “I come from a family of fire-breathing dragons.”

“It makes sense for me, too. My mother was a Wood Elf.”

“Then what was your father? A wood elm?

His mouth twitched. “No.”

Ah, she’d almost made him smile. No feelings, her ass. “Are you sure you’re not part tree? Maybe you have a wooden leg?”

He gave her a bland look.

“Why do the trees do what you want? Do they relate to your wooden personality?”

He arched a brow at her.

“Or maybe it’s because you have the sense of humor of a tree?”

She cast a wary look at the forest. “You mean they’re listening to us?”

She narrowed her eyes. “You’re jesting with me, aren’t you?”

“How could I with this wooden personality?”

She lifted a hand to swat his shoulder, but he caught her by the wrist.

“Careful, you could get a splinter from my wooden arm.”

She snorted, then grinned when the corners of his mouth curled up. He had a gorgeous smile. “You do have feelings. I knew it.”

His smile faded, replaced by a look of fierce intensity. His grip tightened around her wrist for a few seconds; then he released her. “I promised to return you to your family.”

A pang reverberated through her heart. Goddesses hep her, she wasn’t sure she wanted to leave Woodwyn. Or to be truly honest with herself, she wasn’t eager to leave the Woodsman.

One response to “Review: How to Love Your Elf by Kerrelyn Sparks”