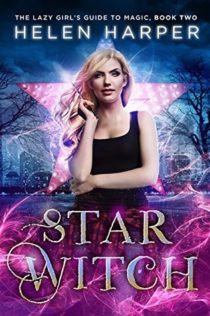 Ivy Wilde, the laziest witch in the West, is still entangled with the Hallowed Order of Magical Enlightenment. That's not a bad thing, however, because it gives her plenty of excuses to spend more time with sapphire eyed Raphael Winter, her supposed nemesis. And when he comes knocking because he needs her to spy on the latest series of Enchantment, she jumps at the chance. Hanging around a film set can't be hard ... or dangerous ... right?

The world’s laziest witch reminds me of myself, if I had magic powers.  I love Ivy.

Ivy Wilde has been free from bond to Exemptus Adeptus Raphael Winter for a few weeks. So she is surprised and delighted when he shows up at her flat and not so happy that he brought the head of the Hallowed Order of Magical Enlightenment with him. Winter and the Ibsissimus need Ivy’s help. Ivy’s favorite TV show is Enchantment where people who believe they possess magical abilities, but not really, compete against each other in magical face-offs. Unfortunately, they are not looking for her to watch the shows from her couch and takes notes for them. There has been a death on the set of Enchantment where they are filming in a remote location in Scotland. The new format is more witches Survivor-style and the Order needs Ivy to go in undercover and observe since the producers are not allowing the Order anywhere near their closed set. It takes some work, but a seemingly angry Winter convinces Ivy to work with him again.

Ivy is unhappy that her job as a runner on set entails a lot of running around. Worse yet, just when she is making some progress in her investigation…or Winter’s investigation, the producers find themselves one contestant short and decide that Ivy needs to step in or get lost. Watching Enchantment from her couch is fun but being forced to traipse through the wilderness and compete is hard work and Ivy hates hard work.

When Ivy and Winter determine that the killer is raising the dead to do their dirty work, there is no choice but to take down the necromancer. The Ibsissimus comes forward with a spell that will rob the necromancer of his power, but it can only be used by the most powerful of witches and in this remote area, the only ones strong enough would be Winter or Ivy.  Absorbing that much black magic is deadly and the Ibsissimus asks if Ivy is willing to make the sacrifice.   Knowing her true feelings for Winter, Ivy knows she will make the ultimate sacrifice to take down the killer and keep Winter safe, and she has to do it without Winter finding out and stopping her.

I adore Ivy, Winter and her brat of a cat, Brutus, who comes along and sucks up to the MC of Enchantment playing sweet kitty, much to Ivy’s annoyance. I also like the fact that the author doesn’t drag down the series with the does he like me, like I like him drama that many series drag out. Even in the middle of danger, Ivy and Winter stop and agree that I like you and you like me and once we catch this killer, we need to get busy. Then we can focus on magic and zombies and stop worrying about if he likes me too. Unfortunately, the author does keep the sexy times behind the scenes.

I quickly moved on to Book 3 and the novella.  I really want to be like Ivy when I get magical powers.  🙂

P.S. I am still a bit annoyed that they didn’t use a British narrator, but I am getting used to the voices so now I am stuck with them in my head.

I would so do this if I had magic talent…

I plonked myself down in the far corner and sat cross-legged on the floor. It was all becoming too much. I tried to will my legs to work but it wasn’t happening; instead I pushed my head back so I could see the top of the refreshments table. Then I used a quick series of runes to set out the cups and saucers.

There must have been quite a rattle of china because several of the producers’ heads turned in my direction. One blonde woman nudged the man next to her and the pair of them watched as I lazily lifted my hand. At least there was a decent-sized urn with enough hot water in it to do the trick. I ignored their stares and continued. Some of us had real work to do. The group eventually gave up on the Ivy Wilde Show and continued their discussion. I was too tired even to listen, despite their tones of worry and displeasure.

I’d just finished magically dispensing teaspoons to each saucer from my vantage point on the ground when Belinda entered with a young man who I took to be her assistant. He was holding an umbrella over her head and, rather than fold it up, he left it open. I squeaked in dismay. This might only be a tent but we were still indoors I’d already had all the bad luck I needed for this year.

Abandoning the coffee cups, I lunged for the still-dripping brolly. The man gave me an astonished look.

“What the hell do you think you’re doing?” I yelled at him. “Don’t you know anything?” I snapped the umbrella shut and flung it back at him. His reactions weren’t fast enough to catch it and it fell uselessly to the floor.

Belinda raised a perfectly manicured eyebrow in my direction. “Is there a problem?”

“I should think,” I said through gritted teeth, no longer caring that I was talking to one of my idols, “that a magical show would know better than to tempt fate.”

A flicker of amusement crossed her face and she exchanged glances with the seated producers, as if to tell them that they’d employed a crazy person. Honestly. I was surrounded by idiots. Famous well-paid idiots, but idiots nonetheless.

I snorted to myself. If she went around indoors with open umbrellas that was hardly surprising. I stopped paying her attention and collapsed in the corner again. My small spurt of energy meant I’d need to sit down for at least another half an hour.

Using some carefully designed runes, I transported each cup to the urn and filled it up before sending it through the air to each seated person. One by one, they all fell silent as my bippity-boppity-boo ensured they were appropriately watered.

“What?” I snapped. “You said you wanted coffee.” 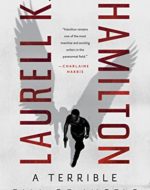