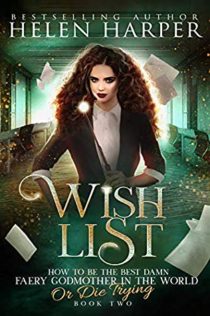 Wish List (How To Be The Best Damn Faery Godmother In The World Or Die Trying. #2) by Helen Harper

Saffron Sawyer is a faery on a mission. She may no longer have the same rose-tinted spectacles about her job as she once did, but she’s still determined to be the best faery godmother that there is. And when she’s given the role as leader of a taskforce designed to hunt down the elusive trolls, she knows it’s her time to step up and be counted.

Juggling her new responsibilities while dealing with difficult clients isn’t easy, however. Danger lurks around every corner - and Jasper, the handsome and powerful Devil’s Advocate, is continually looming over her shoulder in the office.

Can Saffron prove her worth to the world of magic? Or will she make one mistake too many and find herself in mortal danger?

Wish List is the second book in the ingenious series How To Be The Best Damn Faery Godmother In The World (Or Die Trying).

This one was painful. Just painful.

Saffron is still trying to be the best damn Faery Godmother in an office full of jerks who hate her and who treat her badly.

She is still chasing clients around to figure out what their wish is. This time she is given a wish for Rose, a woman in her eighties who she hope isn’t going to ask for more time or to be young again which are simply things even a Faery Godmother doesn’t have the ability to grant. Except the first time she meets Rose, Rose puts a gun in Saffron’s face, afraid that Saffron is one of them. One of who?

Because of memory magic, Saffron has to start from scratch every time she sees Rose. First she has to convince her that Saffron isn’t trying to kill her and then she hopes to have enough time to get some information from Rose about who is trying to kill her. If that’s Rose’s wish — well Saffron can’t kill someone for Rose, but if she knows why someone is after her, then maybe she can do something about it. It seems Rose’s little Jack Russell Terrier isn’t effected by memory magic but it doesn’t mean that he doesn’t try to bite Saffron every time he sees her.

Saffron finally decides to break the rules and gives Rose Gingko Biloba to thwart the memory magic but unfortunately the bad guy gets a sip as well. Now she is in trouble for breaking rules and she has a bad guy who hasn’t forgotten that Faery Godmothers exist and…he has her magic wand. Things are not looking up for Saffron.

Sorry but this plot was really, really stupid and I was very annoyed by the whole thing.  I really thinks Saffron is getting assigned the worst cases, but since no one knows what the wishes are, how would they know to assign the crappy clients to her.

Saffron is still being treated poorly by her boss and her co-workers.   She gets yelled at for missing team building meetings (really?)   She also gets the task of creating a task force to find the Trolls, because she has lots of free time after chasing clients all day.

I didn’t like this story and there are still too many stupid things but I am in it for one more story to see Saffron finally rock this Faery Godmother business.